This Friday, February 22, marks the beginning of Mardi Gras festivities in Galveston. The festival itself, which takes over the Strand and offers up parades, live music, food (and more beads than you can count) will run until March 5, the day before Ash Wednesday.

In the spirit of the festival, the island’s two main art spaces — the Galveston Arts Center (GAC) and the Galveston Artist Residency (GAR) — have found their own ways to embrace the event’s many traditions. GAC kicks off the weekend early, with a mask-making party on Thursday, February 21, inviting visitors to the Center to decorate an accessory for the carnival. On Friday, since GAC’s building is located on Galveston’s Strand in the thick of the Mardi Gras festivities, the organization is hosting a party with food, drinks, and bead throwing out of the build’s second-story windows. GAC also offers an opportunity to be in that night’s parade on a Disco Bus. (Tickets for this event must be purchased in advance.) 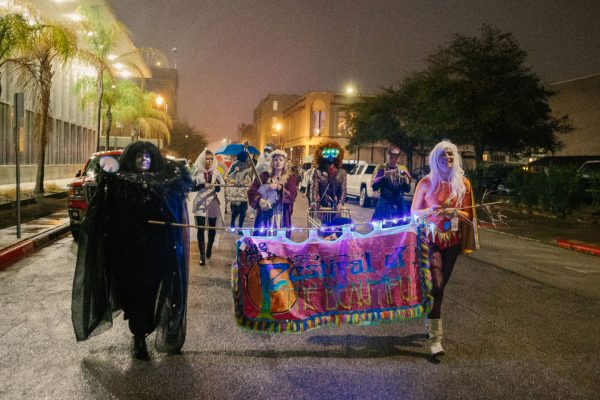 The 2018 Festival of the Beautiful

A few streets away from the Strand, GAR is hosting its own pseudo-parade, the “Festival of the Beautiful,” that’s free and open to all. For this event, attendees are expected to wear a costume  and bring handmade gifts, in lieu of beads. After “perambulating” through downtown, the Festival of the Beautiful will return to GAR for a concert featuring Studded Left, CHALK, and DJ Robert Disaro. The parade will kick off at 6 PM at the GAR building. (Get there early for gumbo.)