H-E-B, the Texas grocery giant, has a long history with art and artists. The beloved artist Chuck Ramirez worked for the San Antonio-based company as a graphic designer, and drew his signature object-on-white-background style from product photography associated with commercial advertisements. Some of his photographs can be found in the San Antonio H-E-B located at 516 S Flores St. 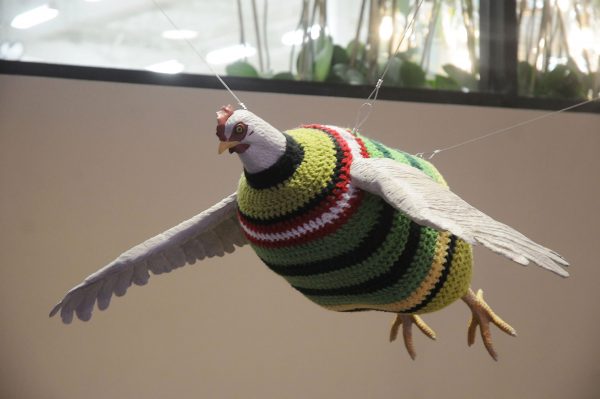 In Houston, with the recent construction of two two-story H-E-Bs, the company has continued to commission public artworks for its shopping environments. First, when H-E-B’s Bellaire store was built, the company asked San Antonio artist Ansen Seale to create a Bayou-inspired piece to greet visitors at the store’s entrance-exit. Now, for the company’s new 92,000 square-foot store in Houston’s Heights neighborhood, H-E-B tapped Houston-based artist Elaine Bradford to create an artwork inspired by H-E-B. The piece features a flock of crocheted sweater-wearing chickens, and a set of coins made by Ms. Bradford’s collaborator, Rene Cruz. All of the piece’s sweater color combinations are inspired by popular H-E-B products. 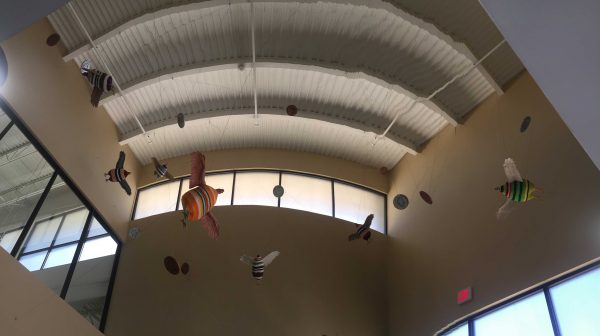 Ms. Bradford’s idea for the installation, which is titled Who says that chickens can’t fly, or that money can’t fall from the sky?, comes from a story that the artist discovered about H-E-B’s history with chickens. More on that below, via an article from the Texas State Historical Association:

“By specializing in low-priced goods [H-E-B] survived the Great Depression so successfully that [H-E-B namesake Howard Edward Butt] was able to introduce employee picnics and a group life-insurance policy, move company headquarters to the Rio Grande valley, and expand to nearly twenty stores in Southwest Texas, with a gross business of $2 million in 1931. The company also organized a buying department and construction division. It began advertising with free gifts — dispensed in one case by throwing tagged live chickens, good for free groceries, and handfuls of nickels off a store roof-and later gave away cars, mink stoles, trading stamps, and cash prizes.”

Ms. Bradford hopes that the artwork, which was facilitated by the Weingarten Art Group, will charm shoppers. H-E-B’s Group Vice President for Public Affairs, Diversity and Environmental Affairs, Winell Herron, expanded on this notion, saying, “we hope these fabulous fowl provide a greater sense of place and our customers enjoy this artful element.” 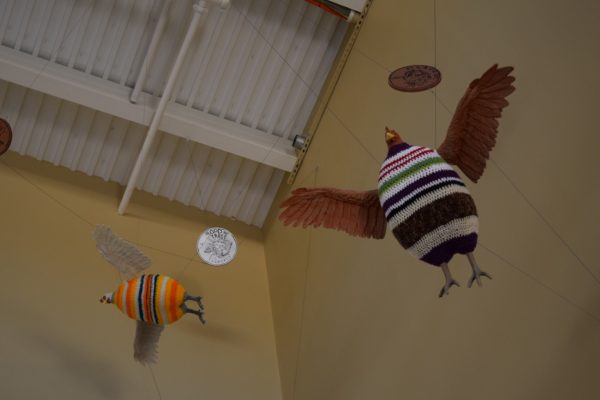 “It’s kind of surreal having work up at a store that’s so synonymous with Texas, and I’m happy they took a chance on this crazy idea of mine. It’s pretty exciting that my art will be seen by such a wide audience (even if I have neighbors who told me they went to the new H-E-B and didn’t even see the work). My advice to people is to look up. I hope people really take time to take it all in, and smile, before they look back down at their grocery lists.”

You can catch Who says that chickens can’t fly, or that money can’t fall from the sky? at the now-open Houston Heights H-E-B (2300 N. Shepherd Drive).

Elaine rocks. These chickens can pluck a bad mood in seconds. BB

I LOVE them! I smile everytime I go to the store and see them. I want one hanging in my house!