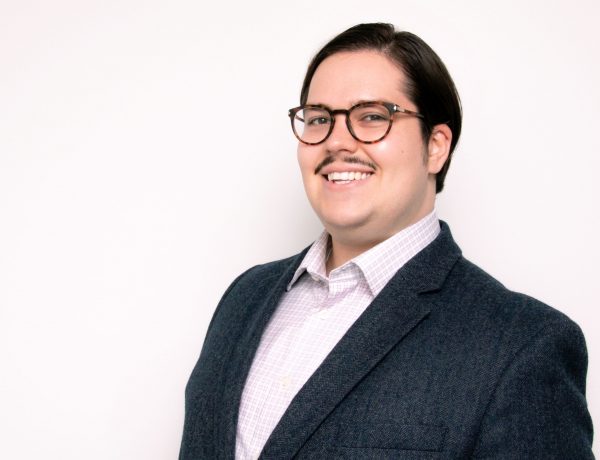 Glasstire’s Board of Directors is pleased to announced that it has named Brandon Zech as the organization’s new Publisher. Zech has been an editor at Glasstire since 2015, and will formally begin his new role on June 1, 2019.

Zech steps into the role of leading the organization at a moment when Glasstire has been growing its audience, staff, and influence. In choosing Zech to replace Glasstire’s Founder and Publisher Rainey Knudson, who announced last fall that she would be stepping down this year, the organization has selected an existing staff member who has extensive knowledge of the publication’s mission, history and goals.

“I’m excited for my new role as Glasstire’s Publisher, and I’m looking forward to ushering in a new phase of the publication’s life,” Zech states.

In his new role, Zech will oversee the publication’s day-to-day operations, its budget, and its big-picture initiatives. Over the next four months, Knudson will remain as Publisher, working with Zech to ensure a smooth transition of leadership of the organization. Christina Rees, Glasstire’s Editor-in-Chief, will continue in her position, overseeing the publication’s editorial content.

Zech began his tenure at Glasstire in 2015 in the role of Assistant Editor. In addition to covering art shows and happenings in Houston, he played an instrumental role in extending Glasstire’s coverage of San Antonio and Austin. In 2018, after three years with the organization, Zech was named Glasstire’s first-ever dedicated News Editor, taking responsibility for the publication’s news content. During his time at Glasstire, Zech has also been involved in all of the non-profit’s ongoing programs, including fundraising, grant writing, and sponsorship initiatives, as well as Glasstire’s public events, including the Off Road speaker series, the Glasstire Party, and the Glasstire Art Writing Prize.

Founder Rainey Knudson said of the announcement, “Brandon was my first choice to replace me at the helm of Glasstire. Over the past four years of working on our team, Brandon has proven himself to be incredibly adept at dealing with any number of scenarios and tasks that arise in the intense, fast-paced world of online journalism. He has traveled extensively and deepened his knowledge of our statewide art scene. His ideas for the next phase of Glasstire are very exciting. Most importantly, Brandon has a generosity of spirit and deep appreciation for the artists who live and work in Texas, and this really lies at the heart of our work at Glasstire. I could not be more pleased.”

Glasstire Board of Directors President, Leslie Hull, commented, “After several months of internal deliberation, the Board of Directors unanimously and enthusiastically chose Brandon Zech to lead Glasstire going forward. Brandon’s deep knowledge of Glasstire and of the Texas art scene, coupled with his outstanding organizational skills and impressive academic background, make him the ideal leader for the publication’s next phase. We are energized by the projects we have in place for 2019, including an Off Road conversation with the artist Vincent Valdez, and the introduction of our first bilingual content. Under Brandon’s leadership, we are confident that independent arts journalism in Texas will continue to thrive.”

After Knudson steps down as Glasstire’s Publisher, she will remain on the organization’s Board of Directors.

Prior to joining Glasstire, Zech graduated summa cum laude in three years with a degree in art history from the University of Houston. During this time, he worked for a number of Houston-based arts organizations, including the Aurora Picture Show, DiverseWorks, The Printing Museum, Project Row Houses, and the Contemporary Arts Museum Houston. He also served on several boards, including the Center for Arts Leadership Student Board at the University of Houston, and the Houston Fringe Festival Committee. Since he joined Glasstire, Zech has been invited to speak at colleges and art spaces across Texas, including Artpace, Anya Tish Gallery, the Texas Contemporary Art Fair, and Houston Community College, among others.

About Glasstire
Glasstire is an online magazine that covers visual art in Texas. Its mission is to expand the conversation about art in the state. It has been continuous operation since January 2001. It is a non-profit 501(c)(3) publication, supported in part by grants from The Houston Endowment, The Brown Foundation, Inc., the National Endowment for the Arts, the Greater Houston Community Foundation, the City of Houston through Houston Arts Alliance, and the Texas Commission for the Arts. Glasstire’s name is an homage to Robert Rauschenberg’s sculptures of tires cast in glass. The artworks evoke traveling great distances, at great speed, with great clarity.

Glasstire is the oldest web-only art magazine in the country.

He has to cut off his hair for the job? What a sell-out! (At least the board let him keep that John Waters mustache!)

Way to go, Brandon! I’m so proud of you! What an exciting opportunity!

Congratulations!! So excited for you.

Congrats Brandon! So well deserved, and a truly wonderful thing for all of us in Texas who receive so much edification from all that you and Glasstire do!

Looking handsome there Brandon, I do miss the hair though, but CONGRATS on your new position!

Congratulations, Brandon! Best wishes to you as you take the helm. We’re excited for you and the future of Glasstire.

From everyone at LHUCA, CONGRATS! & WELL DESERVED

Sorry to see Rainey departing (but looking forward to her tour), delighted Christina will continue her terrific writing, and thrilled about Brandon’s new role! Great work over all these years, Glasstire.

Great news Brandon. Very happy for you AND I like the haircut.

Such terrific news! Congratulations, Brandon — very happy for you and Glasstire