‘A Ship of Human Skin’: A Conversation With Richard Bailey 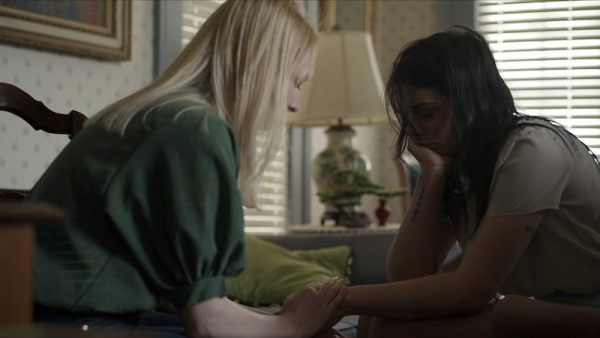 Still from Richard Bailey’s feature A Ship of Human Skin, which debuts at Dallas VideoFest this week.

I first met Richard Bailey in 2013 at the Dallas Video Festival through a mutual friend, the film artist Michael Morris. The following year Bailey and I began collaborating, primarily on performance video projects in which Bailey served as the DP, and more recently also as editor. Four years (and a handful of collaborations) later, Bailey’s third feature film A Ship of Human Skin, executive-produced by Bailey and his wife Sandra Pierce, debuts at the 31st Dallas Videofest this Thursday, February 7. 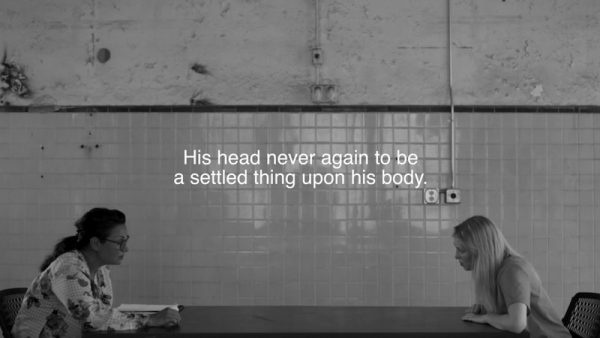 The film is a gothic tale of mysticism and violent crime. Two women travel to the fringes of rural culture to seek a revelation. They get trapped in a fierce place, and one murders a man with an ax after she has a vision that he’s evil. While she’s locked up in prison, legend spreads that she levitates. The film features local talent, including Hilly Holsonback, Hannah Weir, Ike Duncan, Cameron McElyea, and Fred Curchack.

One of the things that initially drew me to Bailey and his work is his intelligence, and his willingness to discuss universal — and sometimes unpopular — topics, like reconciling faith with human depravity. But he tends to balance this darkness with a questioning optimism, rather than emphasizing or gratuitously glamorizing gloom or despair. His work merges poetry with cinematic awe while tackling tough subjects. 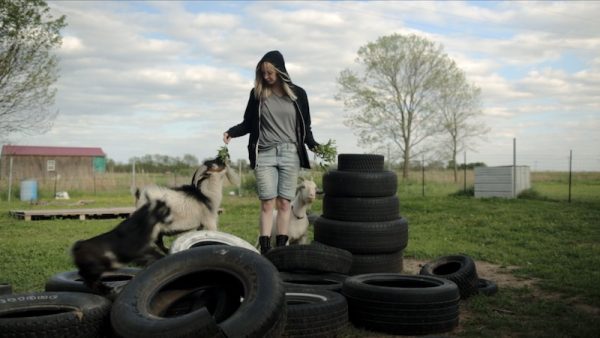 Colette Copeland: The Texas landscape features prominently in your films, almost functioning as a character. I associate your style with panoramic vistas and majestic long shots of the land, sometimes as a respite from the narrative, and other times driving the narrative. How does the Texas landscape inspire your storylines and characters?

Richard Bailey: I grew up on a little farm in central Texas. Nearby towns were very small — we’re talking populations from 1,000 to 3,000. The structures of commerce and industry weren’t regular features in my life at the time. The frontier of my imagination was shaped by open fields and wooded creeks.

Poets figured out a long time ago that natural images make powerful correlatives for our emotions. I willingly go along in this tradition. I use pictures of daybreak, open fields, barren rocks, and bodies of water as emotional correlatives for characters in movies. These pictures add an extra charge to a character’s feelings of grief and joy. The pictures also invest the scene with mystery. The sense of “otherness” we have for nature opens up many dramatic possibilities. 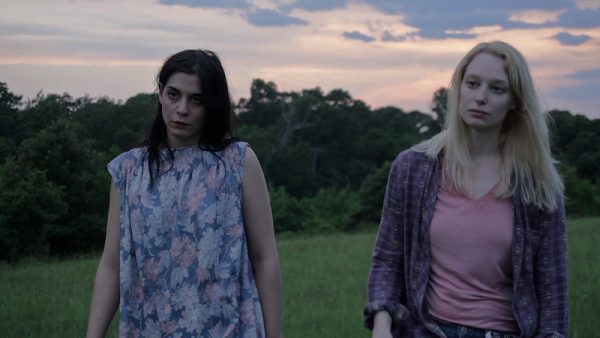 If I’m doing my job right, these cuts to the natural world are not confusing for the audience. Rather, there is a sense of inevitability in the flow of images. The effect raises a character from a particular situation into a universal one, so that their story becomes a larger story, part of the story of the world.

Anthropomorphizing nature is inevitable, I suppose. I truly hope I don’t do it very much. Nature doesn’t need anyone’s voice to be significant. People, on the other hand, need contact with nature for a feeling of significance. Natural images can raise a character’s struggle into the symbolic realm. 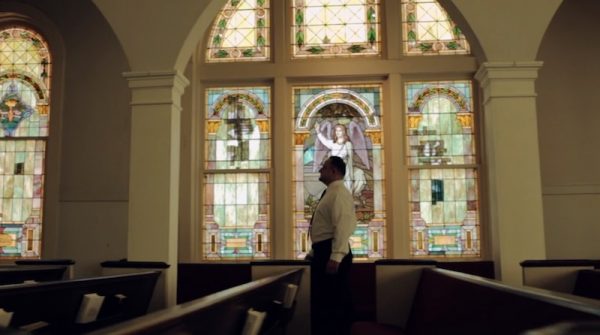 CC:  Your films also delve into the dark side of the human psyche. A reoccurring theme is the co-existence of good and evil, not as a binary relationship, but as an aggregate — one that is crucial to the soul’s development. How does beauty operate as a strategy in your cinematic oeuvre? Tell us about your exploration of evil as a component in the characters and their actions in your films.

RB: Beauty is my main object. Every filmmaker wants the audience to have a transportive experience, and I think beauty is the best provider of such an experience. I don’t mean decorous beauty. I mean the sort of beauty that is paired with a haunting sense of loss. For some reason — and I’m sure it’s very complicated even though the association comes automatically — but gorgeous things radiate fatal possibilities in the imagination. Beauty and the dread of impermanence lie in the same bed. 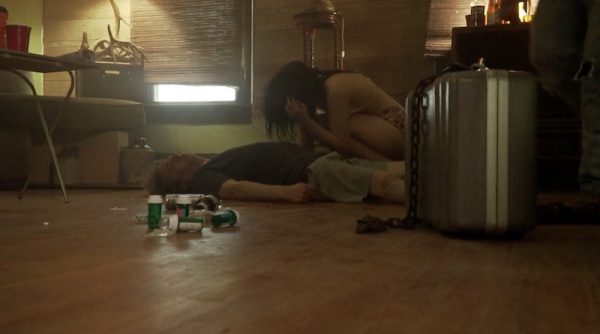 Shelley’s opening lines in Hymn To Intellectual Beauty go: “The awful shadow of some unseen Power / Floats through unseen among us.” We don’t know what that Power is. It’s not there in a concrete sense, but certainly it is there. The poet realizes that a search for beauty is accommodated not only by delight but also by anxiety, something brought on by a profound sense of loss. 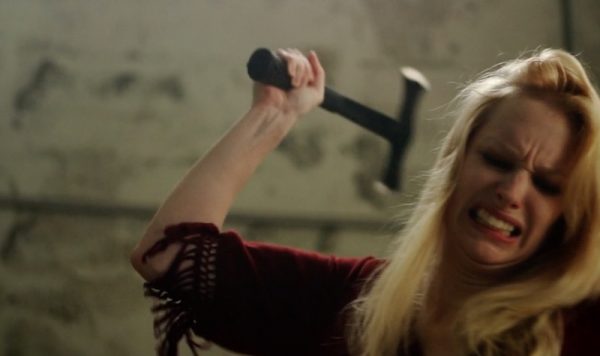 As for good and evil, I believe they are simultaneities and not warring factions. They’re aspects of the same whole — or Power. Turning to another poet: Baudelaire has a cosmology that interests me very much. Baudelaire dislikes the idea of Original Sin. Nature, according to the poet, is born permeated by terror. Wickedness is not the result of a fall from grace, but is instead the inevitable manner in which human beings elaborate on transcendental terror. Baudelaire never says the world is irretrievable or that people can’t improve. There’s a fascinating sort of optimism in the work. He admires Edgar Allan Poe’s idea of Supernal Beauty. But terror — perhaps an iteration of Shelley’s unseen, awful Power — is unavoidable; it’s in the fabric of everything.

CC:  The paranormal is also a prevalent theme in your work — a Texas magical-realism sensibility. When you’re writing, how do you determine the balance between believable, yet metaphysical, events in the script?

RB: I enjoy talking about ghosts with people. It’s like we’ve come to some crack in the status quo and incorrigibly go about trying to widen it with talk of strange things.

Texas is home to fascinating ghost stories. Many of them speak awful truths, but just as many are humorous. The landscape here is very hospitable to the imagination. One can feel quite isolated. The sense of isolation might evoke liberating ideas or frightening ones. In my experience, it’s often both. In this latest film, A Ship of Human Skin, a character says:

“It can be toil out here, real toil. Middle of nowhere, the sky could fall on you like a box and nobody would know! There you’d be, trapped and crying out. Anybody who comes along would see just a blank — blank landscape and you not there.”

That’s the sort of haunting sentiment I think makes a good ghost story. My movies are ghost stories, but not horror movies. Horror movies are a whole other thing. I like the dramatic possibilities of ghosts. One can fit a tremendous amount of emotional content in a screenplay just by typing: “Enter Ghost.”

As for balance, I rely on my experience as a reader. I’ve never been a movie geek. Obviously, I love movies. But as far as when to introduce certain types of images or how to distill information, I look to poetry. The poetry I prefer favors emotion over plot. Like the poets I admire, I try to build a narrative that seems an inevitable flow of images and emotions. 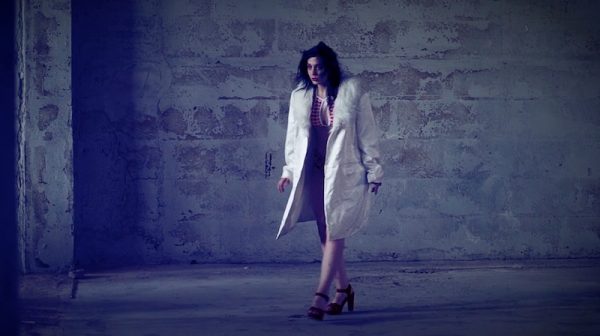 CC: Like all of your films, A Ship of Human Skin takes place in Texas and features local actors and talent. Please expand upon your inspiration for the storyline and your commitment to the local community.

RB: I’m fortunate to be a filmmaker in Dallas right now. Every week there are opportunities to see edgy theater and experimental performances. Watching actors push boundaries inspires me to push boundaries in my scripts.

The leading characters in A Ship of Human Skin present many challenges for the actors. The character Jeannie Tiller is mostly uneducated, but nevertheless has a revolutionary way with religious language.  Jeannie and her friend Saribeth Merton come to a hard place, where Saribeth’s soul plunges, Orphically, into darkness. Jeannie has to do something severe in order to save her friend, and she’s punished for it, harshly. Saribeth recovers and becomes a figure of grace. 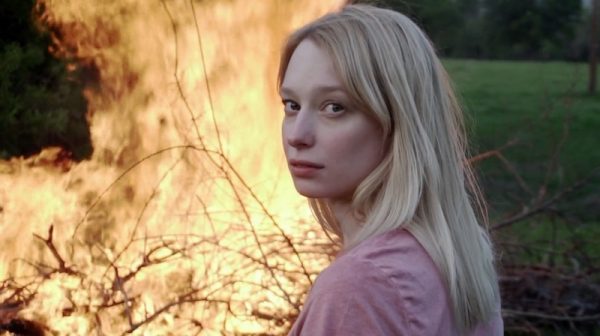 This script was written for Hilly Holsonback, who plays Jeannie, and Hannah Weir, who plays Saribeth. I hadn’t met them before, but had seen them perform with Dead White Zombies and Therefore. Their performances in the film are wonderful.

(Here is a link to the movie’s trailer on Vimeo.)

I hope folks will look at the credits. In addition to DWZ and Therefore, the performers come out of groups and series that include Artstillery, Avant To Leave This Planet, Dallas Ambient Music Nights, Endeavor Cinema, Mad Swirl, and Poets on X+. The film received support from creative and generous people in the communities of Commerce, Corsicana, and Fairfield.  These are wonderful places to make a film.

The producers are Jay Flowers, Andy Don Emmons, and Paul Bryan. Andy and Paul are excellent artists. Jay Flowers is new to Dallas. Jay is a terrific videographer. He’s also an artist who experiments with sound technology.

CC: You had an interesting experience while filming A Ship of Human Skin.

RB: I rented an RV to transport the actors back and forth from Fairfield, where we were shooting for four days. We completed an evening scene in one of Andy Don Emmons’ pastures, and by the time we packed up it was black outside. The headlights were pencil thin against the dark. Andy wasn’t there that night to guide us, and so we inched along in the RV, searching for the trail that would take us to the gate. 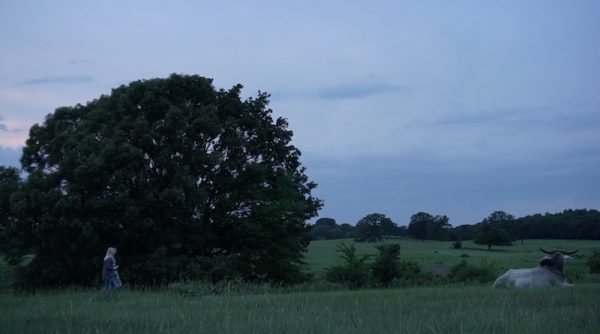 All at once, a herd of cows came ’round us. They weren’t worried about the RV; they walked peacefully along on all sides. The headlights finally had something to bounce off of, but all they showed us were cows. The way the light overexposed their hides and shone in their eyes gave the cows a spectral quality. We crawled along with the herd until we found our trail. The image of joining that ghostly herd stays with me. It’s a strange and cool sensation — kinda like the movie!

Contributor’s postscript: “The screenplay for ‘A Ship of Human Skin’ has advanced to the quarter-final round of the Fresh Voices Screenplay Competition. Based in Hollywood, Fresh Voices is rated one of the best screenwriting competitions in the country. According to the judges, this script advances for ‘magical’ scenic description and ‘thrilling, poetic’ dialogue.”

Dallas VideoFest AltFiction passes are $50. Here is more info on the full program.