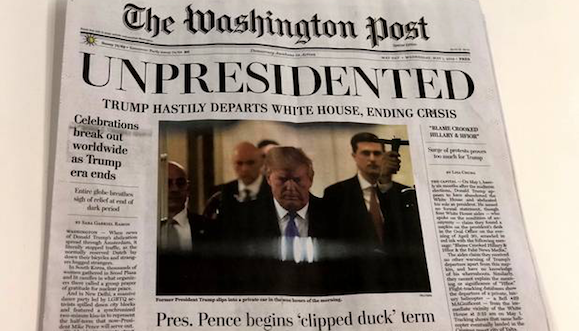 The New Yorker, along with many other publications, reports that Jacques Servin, a member of the self-described “trickster art duo” the Yes Men, handed out 25,000 mock copies of the Washington Post to D.C. commuters last week. The paper was created by three people: Servin and the writers L. A. Kauffman and Onnesha Roychoudhuri.

The fake Post was neither a parody of the newspaper nor a caricature of the current moment, writes the New Yorker‘s Masha Gessen; it was, “rather, a vision.”

Via the New Yorker: “Servin said that the project began last summer, when he attended an activist brainstorming session ‘about how to rally grassroots support for impeachment—to, in turn, pressure newly elected Congress members.'”

Servin told the New Yorker,“Democrats embracing neoliberalism for forty years, leaving millions in the dust who should be their base, is why we have Trump. And the only way to oppose this hideous right-wing populism we’re seeing is to offer an ambitious and appealing vision from the left.” One article is titled, “BLAME CROOKED HILLARY AND HFIOR: Surge of protests proves too much for Trump.” When Gessen asked for a definition of “hfior,” Servin said, “It’s related to covfefe. You actually mix it with covfefe to get wpnei.” 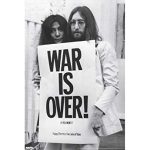 (We can’t go further without mentioning the connection between the mock Post and the John Lennon/Yoko Ono press conference, billboards, and 1971 Xmas song. Wishful thinking.)

The broadsheet-paper edition contained a tabloid-size insert: an action guide to turning the mock Post’s fake news into reality. In twelve short articles—three of them by Kauffman, two by Roychoudhuri, and several culled from sources as different as the Serbian direct-action group Otpor! and Gene Sharp, the American theorist of nonviolent action—this sixteen-page pamphlet may be the best primer now available on understanding protest. It is titled “Bye-Bye: A Guide to Bringing Him Down.”

The action guide makes suggestions such as: 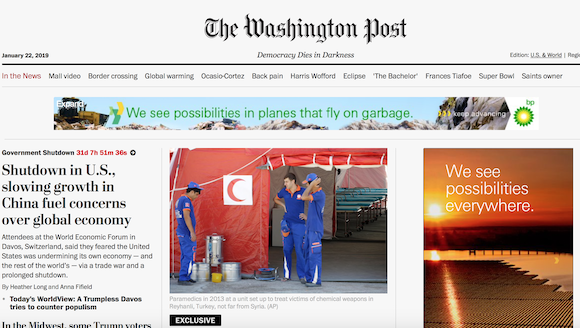