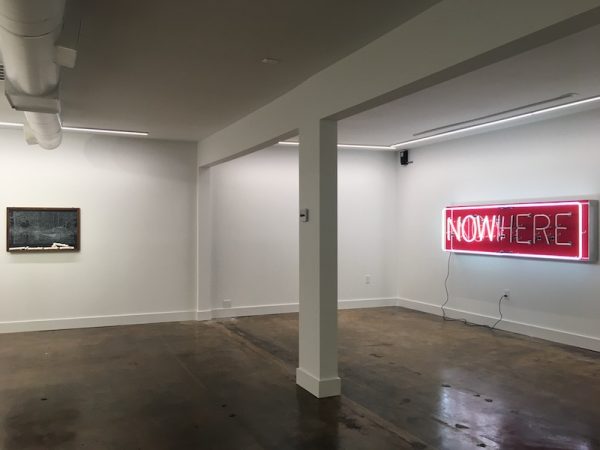 One of The MAC’s galleries in the new space. Pictured: work by Helen Altman on the left, Alicia Eggert on the right.

This weekend The MAC, a non-profit art space in Dallas founded in the mid-‘90s, opens its long-awaited new space in the Cedars neighborhood, after two years of programming in an interim space just down the street from the new location. The new address is 1503 South Ervay Street, right next door to the commercial gallery Ro2 Art.

The MAC has always been The MAC, though formerly its name was an abbreviation for McKinney Avenue Contemporary, after the space’s original Uptown address, where it shared a building with Kitchen Dog Theater for more than 20 years. During the ‘90s and early aughts, The MAC served a pivotal role in DFW’s art scene, featuring exhibitions by such notable artists as Kara Walker and Fred Tomaselli. The MAC’s original co-founder, the businessman and art collector Claude Albritton III, is still on The MAC’s board, and he and his family own the building the space now occupies.

When The MAC closed its Uptown location in 2015, it moved to a warehouse space (a former  auto repair shop and showroom) at 1601 South Ervay. There, its then-new executive director Rachel Rogerson programmed events and exhibitions that made sense in the un-renovated and non-climate controlled building. Rogerson has since shepherded The MAC’s move to its new finished-out space, and has curated its two inaugural exhibitions, which opened on Saturday evening, January 12, 2019.

(LaFleur also opened a solo show at Galleri Urbane in Dallas on the same evening as The MAC opening.)

According to Rogerson, The MAC will continue its long tradition of inviting guest curators to alternate the space’s programming between national/international shows and exhibitions featuring local and regional artists.