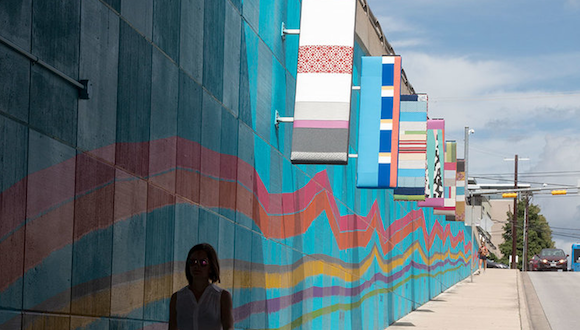 In August, Glasstire posted about a new program from TEMPO, the annual City of Austin program that commissions artists to create semi-temporary installations called TEMPO Refresh. For the inaugural year of this pilot program, artist Laurie Frick has created an installation on top of and around artist Carl Trominski’s Moments — an artwork comprised of “blue signs” sited on the Lamar Bridge Underpass. The work was chosen to mark and celebrate Moments‘ 15th anniversary because Moments is one of the most discussed artworks in the City’s collection. Trominski has been supportive of the concept from the beginning, and generously stated, “I am totally open to a temporary artwork intervention for Moments. This project was a great opportunity for me at the time and I’m happy that it can continue to provide opportunity to others today.”

Frick’s redo (a strange version of an Exquisite Corpse) is called Data Tells a Story. Frick is an artist who explores data through her artwork, revealing the people behind the numbers.

Also, this year, TEMPO has expanded to include murals. Through the TEMPO 2D program, twelve local artists were selected to create hand-painted murals, vinyl-adhesive artwork, or wall-based fiber art at locations across Austin, including public parks, the Austin Bergstrom International Airport, and other high-profile locales. Congratulations to the following mural artists:

You can catch Laurie Frick discussing her work and the TEMPO Refresh program at the second season of Art in Public Places (AIPP), a program of the City of Austin’s Cultural Arts Division, and when  Texas Society of Architects announce the second season of Visionary Voices, the popular speaker series featuring celebrated public artists from across the country. Launched in 2017, the series encourages thoughtful consideration of the role of public art and its relationship to public spaces, examining the often-blurred line between art and architecture. All lectures will be held at 6PM at the Texas Society of Architects building at 500 Chicon Street, and are free and open to the public.