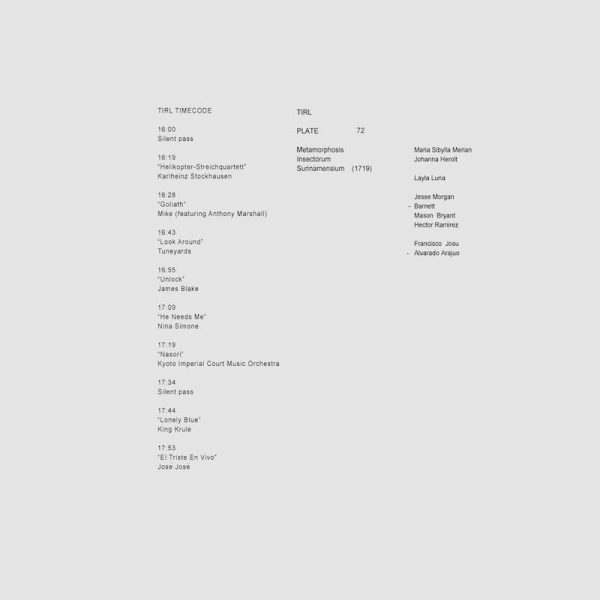 Tirl, the second show at a new alternative space in Fort Worth called Closed—Languages, opened on December 15 after delays due to weather. Set deep with in a nondescript enclave of warehouses, the gallery’s presence could be missed by visitors driving through, and not unfairly — the exhibition space itself is housed in the docking bay of one warehouse.

The show is sparse. More accurately, I could say that it is marginally present. The singular work on view in the gallery is a facsimile copy of Maria Sibylla Merian’s 1719 Metamorphosis Insectorum Surinamensium, chosen by Closed—Languages founders Jesse Morgan Barnett and Mason Bryant and guest curator Hector Ramirez. The book is slightly elevated, angled towards the viewer by a concrete book rest that holds the book open to an illustration of a frog’s developmental stages. Although Closed—Languages bills Merian as the artist of the show, her ghost here serves to remind us of the indeterminism of history. Barnett explains that this image was included posthumously, upon Merian’s publishers request, and remained as a misattribution in Metamorphosis Insectorum Surnamensium for several decades. In fact, as Barnett and Bryant point out, the image doesn’t have any definitive attribution.

The book and image is merely a node for spreading a set of “performances focused around Maria Sibylla Merian’s legacy,” as Barnett puts it. For instance, an unannounced audio accompaniment during the show’s reception augmented what would normally be viewed as a biographical exploration of Merian’s legacy. A single pickup truck periodically drove by the gallery at a crawl, with its windows rolled down, playing music at a volume that was surely deafening for the driver. Although not an entirely unsurprising sight at this sort of industrial park where nearby mechanic shops and a bingo parlor bring in regular traffic, it is a slight tweak that announces something — a slightly disruptive wink and nod. The result is a filmic scene unspooling as something joyous and esoteric: An arrival and end.

Knowing Barnett and Bryant, one could expect a constellation of actions throughout the life of this show. The engraving presented at this show’s opening is scheduled to be colored over the course of exhibition by Fort Worth artist Layla Luna. This is a historical allusion to the lives of Merian’s plates, which were colored by amateurs to increase the plates’ beauty and value. Barnett suggested that the exhibition would ‘change’ before it closes. Perhaps we could call this “choreography,” in place of “exhibition.”