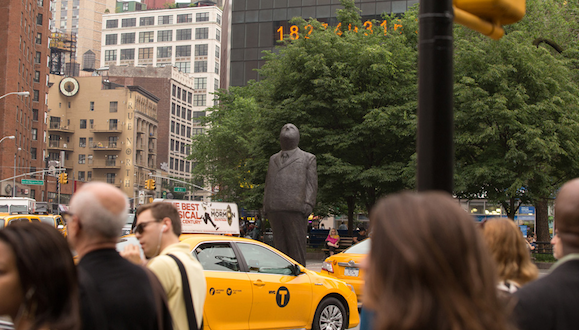 Fort Worth has a new sculpture that is so incredibly positive, we share the opening of the press release to properly express the depth of the feeling:

Simon, in partnership with Cassco Development Co., has unveiled “Think Big” at The Shops at Clearfork, Fort Worth’s luxury lifestyle destination. Previously on display in various public spaces throughout Manhattan, the 12-foot tall bronze sculpture depicts a towering businessman gazing upward at the skyline, contemplating the possibilities that lay within his vast surroundings.

Originally exhibited in New York City, Utah-based artist Jim Rennert’s sculpture, “Think Big”, aims to remind its audience that the American Dream is very much alive and available to all who seek it. Having had a challenging career in business, Rennert made the decision to take on a new career as an artist over 20 years ago. Over those years, his positive thinking, which is evident in the subjects of his sculptures, has helped him to succeed as an artist and gain the attention of collectors worldwide. Rennert hopes “Think Big” will serve as inspiration for all of those who see it to work hard and accomplish dreams of their own.

To be fair, Rennert has expressed mixed motivations. “Initially I had hoped to have depicted popular culture’s ideas on achievement and success in an ironic and humorous fashion,” he says in his artist statement. “However, over the past year, the work has taken on a more serious tone as I illustrate more about the thoughts and ideas we all deal with in our contemporary society.”

For several years, Think Big has appeared in different locations throughout Manhattan and the New York City area. Perhaps location has something to do with the sculpture’s reception. In Manhattan (pictured above), the 12-foot businessman seems to blend in with the busy atmosphere, but in Fort Worth’s “luxury lifestyle destination” (pictured below), he looks lonely. Perhaps that is where his positivity is truly needed.

Visitors are encouraged to take pictures and share on social media using the hashtag #DoYouThinkBig. 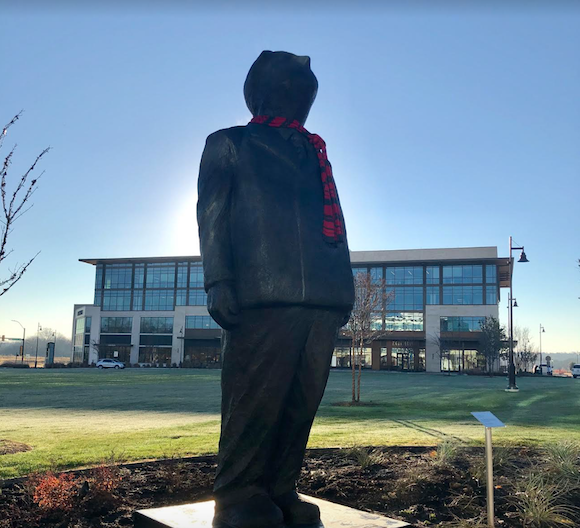 It’s just a boring bronze, that’s what’s sad. He can say what he wants about it, but formally it isn’t interesting. It’s a very ignorable public piece, that seems detached from reality- “Think Big” and “American dream still alive” while America suppresses voters and aims to build a wall when certain people are fleeing terrible conditions in hopes of that better life.

From a positive 2019 vibe, great, new art is good, but you made me read that statement in hopes of really getting something more. Someone with money to waste probably saw it on a business trip to NYC and realized it was for sale. Does New York City still have one on view? If it was so good, they would have kept it.

Could not agree more! Public art should be uplifting. This piece is not!

“Site-specific” is the determining factor for such a piece. Amongst a crowd of suit and ties, the piece is humorous and somewhat inspiring. But in the middle of a big open field, it looks out of place and rather sad.