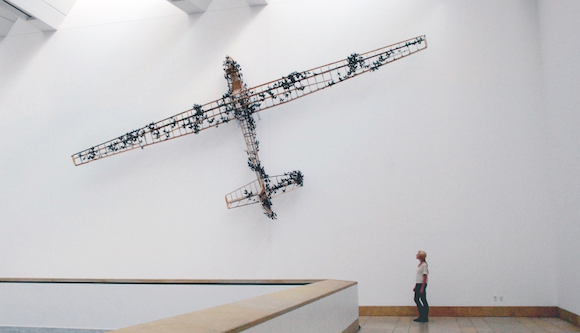 In recent years, the benefits of making medical students take art classes have received much attention in scientific articles and medical journals (examples here and here). Why?

Over at the Blanton Museum of Art at The University of Texas (UT), Ray Williams, director of education and academic affairs, says that he has often focused on Paul Villinski’s sculpture Passage when teaching UT’s Dell Medical School students. “In conversations with students, we have talked about how the two major elements of butterflies and airplane suggest a relationship between nature and technology,” states Williams, “and how medicine engages information from both domains.”

According to a joint press release by Dell Medical School and the Blanton (where Passage has been situated in its atrium), Villinski’s floating wood and metal sculpture is now on a fifteen-year loan to Dell Med. The sculpture is a natural fit for Dell Med given its emphasis on the humanities as a way to educate future physicians, Williams said. The school’s curriculum incorporates an experiential learning course at the Blanton for first-year students, designed to help build skills in empathetic communication, emotional intelligence, observation, mindfulness, and self-care.

“This couldn’t be a better illustration of the aspirations of a vital, inclusive health ecosystem,” said Dell Med’s dean. “Some of those butterflies are our faculty, staff and students. But more are the people we work with in the community. Yes, there’s technology, but it won’t fly without us working in concert.”

With its 33-foot wingspan, the aircraft appears to be lifted into flight by 1,000 black butterflies formed out of aluminum cans, also foraged from the streets. Villinski characterizes the butterflies, a common element in his work, as a symbol of community.