Rembrandt in Texas (Way, Way Up in the Panhandle) 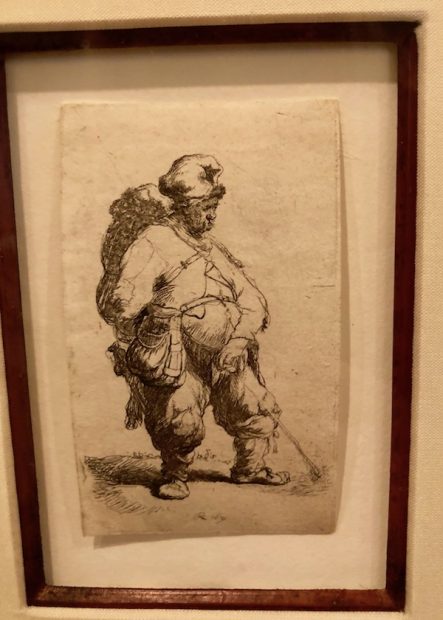 Rembrandt, A Man Making Water, 1621. From the collection of John Villarino

There is an incredible exhibition of Rembrandt etchings on view in Canadian, Texas. This 2500-person town, about 30 miles from the Panhandle’s far north border, boasts the Citadelle Art Museum, and the space has a fairly hefty program (I recently missed the show of Alphonse Mucha paintings and am still sore about it). A little about the Citadelle: Originally a church, the Abraham family purchased the property as a residence in the ’70s and it served as their home for more than 30 years. The Abrahams later donated the buildings, the gardens, and their private art collection, and it’s now the Citadelle Art Foundation.

This is the first time this particular group of pictures, Sordid & Sacred: The Beggars in Rembrandt’s Etchings, has been shown in Texas,  and it hails from a single collector, John Villarino. Google tells me Villarino has something to do with the construction of movie sets (Jurassic Park; Beetlejuice; Edward Scissorhands, to name a few.) He “fell in love” with one of these etchings in 1994, in a Beverly Hills gallery, and has been seeking out pieces from the series ever since. This is not your average collection, collector, or venue. 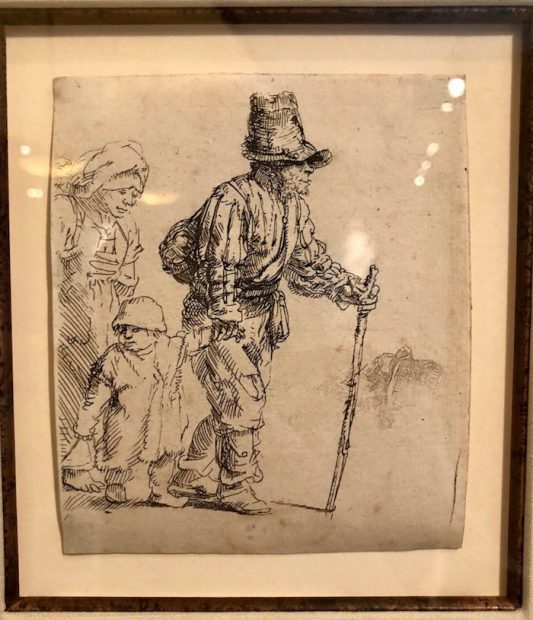 Rembrandt, Peasant Family on the Tramp, c. 1652. From the collection of John Villarino

It is wild to see an entire show of completed Rembrandt etchings and studies in the middle of nowhere. Rembrandt is celebrated for his paintings, of course — but if you’re into drawing, he’s your guy. Gesture in drawing is sometimes illustrated by a bunch of squiggles that get at the mass of something. Gesture, for Rembrandt, is line that gives the essential — but intensely accurate — information in as few marks as possible. In only a few strokes, we can see who this person was: How they stood, gesticulated, looked at the world, with their billowing clothes and haggard face. Conceptually, this collection is fierce (more on that later) but the art of it is in the efficacy of Rembrandt’s marks. 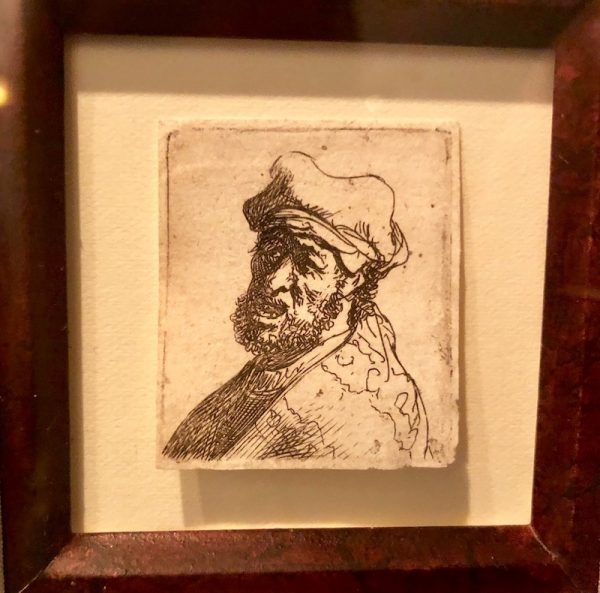 For this show, the object-hood of the prints themselves presents itself immediately. They are nearly all three or four inches on their longest side, and neatly framed with large mats to play up their minuscule size. Each depicts a gypsy, beggar, biblical figure, or Rembrandt himself. The reading material for this exhibition gives insight into Rembrandt’s personal struggles. He was surrounded by death: The loss of his parents, wife, and three children within a decade. He lived to see the death of his son, who made it to adulthood. He paid up to collectors by, for all intents and purposes, becoming homeless. This man struggled. (Apparently he also had a mistress thrown in jail so as not to meet his obligations, so don’t martyr him just yet.) This information colors the way I see his self-portrait as a beggar, and the near-self portraits of men crying out, whether in physical pain or emotional distress, or sheer madness.

The seeming ease with which Rembrandt summons each figure into being forces me to consider exactly what is depicted, and gives it weight. A common thread throughout is exposure: of toes, bellies, privates, illness, and pain. The accompanying essays and materials speak of Rembrandt’s “deep sympathy” for the outcast, but these portraits often read as the grim comedy of a voyeur. He asks us to laugh (e.g. Man Making Water, pictured at top), but after awhile we’re reminded that we are all subject to be stripped of our devices, as even God was (e.g Flight to Egypt; Crossing a Brook). 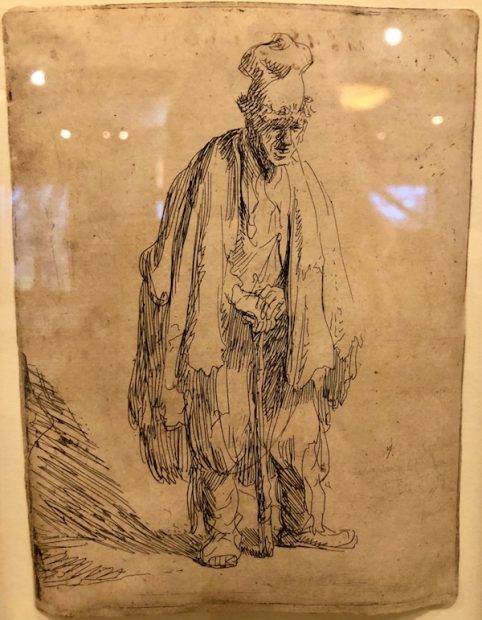 Rembrandt, Beggar in a high cap, standing and leaning on a stick, 1630. From the collection of John Villarino

Just as it is impossible to fully unravel the genius of the curling line-work in these etchings, I struggle to unpack what all the work is doing. The thematic construct of Sordid and Sacred makes this show perfect, almost ironically so, for a non-city audience, in that I find it arrogant to consider “lowly” (blech, find a better word) and “holy” as always-separate things. The patronizing tone in the way these works are written about and displayed is evident. For how much longer will poverty connote some kind of character flaw? If all you poor folks would quit upgrading your phones, you could afford healthcare, amiright? Hey, guys, let’s stare at The Beggar and pat ourselves on the back for working hard so as to avoid such pitfalls.

My last thought as I looked at Rembrandt’s etchings: No one walks into an emergency room for a routine mammogram. Sadly it seems, centuries after these etching were made, Rembrandt’s humanizing of the poor, the immigrant, and the outcast can still seem like a radical act.

Tape Art Comes to the Panhandle

To Whom it may concern:

Canadian, Texas, Hemphill County is not in the middle of no-where unless your from the city & don’t understand that some of the most educated, sophisticated art loving Americans live here. It’s an amazing credit to the Abraham Family & Wendie Cook for their vision to bring the Rembrandt Collection to a truly beautiful, historic region of Texas that’s considered a diamond of a community that truly enhances the wealth of cultural treasures to an important place called Canadian where it is appreciated & valued. I suggest you spend some time in Canadian and witness that it is very close to “Utopia”.