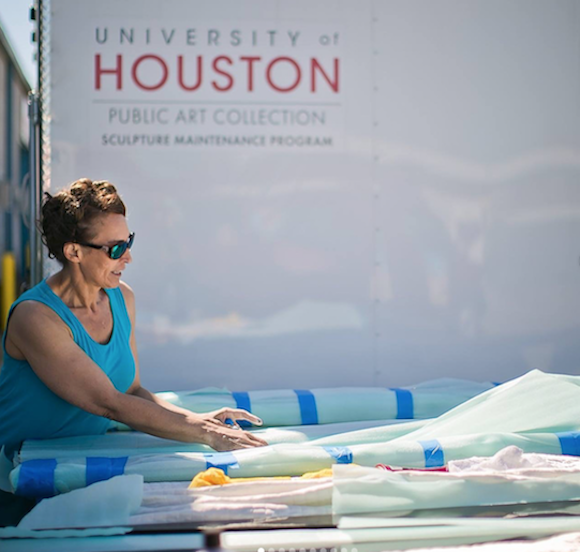 As the year turns to 2019, the University of Houston (UH) will celebrate the 50th anniversary of the Public Art of the University of Houston System (PAUHS). In 1969, the Texas Legislature approved its public art revenue plan, a 1969 Texas law enabling the funding of public art from construction projects. The University of Houston then became the first state university in Texas to formally adopt this program. Now, PAUHS is a collection of public art works by acclaimed local, regional, national and international artists, representing a wide range of media and style. With nearly 700 pieces spanning across the UH System, including UH, UH at Sugar Land, UH-Downtown, UH–Clear Lake and UH–Victoria, PAUHS is offers a wide range of media and styles—free and open to the public.

As reported by Sara Tubbs in the University of Houston newsletter, PAUHS embarked on a Public Art Collection Enhancements (PACE) project under which a number of important artworks are undergoing conservation treatment in anticipation of its anniversary. The pieces will be re-sited to more prominent locations as part of an overall beautification program that also includes landscaping and site redesign. In 2018, Curator Michael Guidry oversaw a total of 26 conservation, maintenance, and strategic art re-siting projects. Some of the works restored included art by John Biggers,  Carlos Cruz-Diez, Richard McDermott Miller, and Jim Love.

For the first time, UH is also the recent recipient of six Mayor’s Proud Partners Landmark Awards sponsored by Keep Houston Beautiful (KHB). The annual awards recognize the exceptional efforts by individuals, communities, businesses and organizations to enhance the city’s landscape. From the ingenuity of architecture students who designed and fabricated a new Embarkation Station for Port Houston to UH’s efforts to give access to world-class public art, a wide range of UH projects (including its new partnership with BCycle, the city’s bike-share program) earned accolades.

The Mayor’s Proud Partners Awards are presented annually by KHB. Click here to see the complete list of UH winners.