After Chernobyl, Life in a Ghost Town: BERLIN Collective 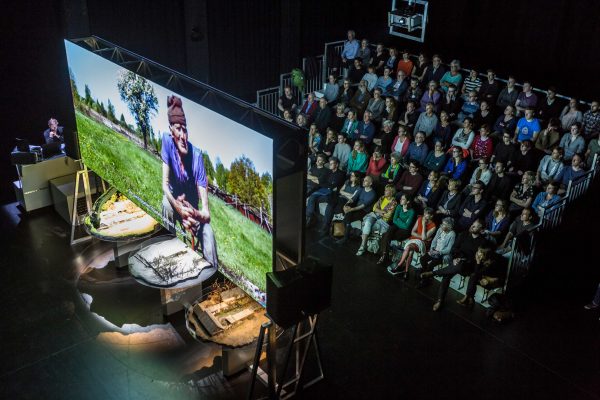 BERLIN, Zvizdal [Chernobyl –so far so close], 2016. Photo: Frederik Buyckx. Courtesy of the artists and DiverseWorks.

In 2019, the Antwerp-based performance collective BERLIN (Bart Baele, Yves Degryse, and Cathy Blisson) will be coming to Houston and Austin for performances of its cinematic play, Zvizdal.

The interdisciplinary performance tells the story of an elderly couple living in the town of Zvizdal. The couple, Pétro and Nadia, refused to evacuate their home in 1986 following the Chernobyl disaster. Since then, they have essentially been living in a ghost town: all of their former neighbors and acquaintances moved away in fear of the radioactive fallout of the disaster.

For their project about Pétro and Nadia, BERLIN followed the couple from 2011 to 2016, documenting how the years of solitude and lack of basic necessities (like electricity and running water) has changed their lives.

BERLIN’s shows in Houston and Austin are part of a larger U.S. tour of the performance that was co-organized by Fusebox in Austin. Other stops include: the Wexner Center for the Arts, Columbus, OH; the Contemporary Arts Center, Cincinnati, OH; the Walker Art Center, Minneapolis, MN; and PuSH International Performing Arts Festival, Vancouver, Canada.

Get tickets for BERLIN’s Texas stops below.