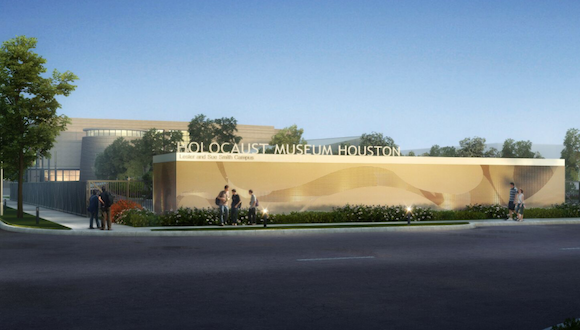 As Glasstire reported in June 2017, the Holocaust Museum Houston (HMH) was about to close (and move into a temporary location) for renovations. Now, the Museum has announced that it is about to reopen, bigger and better.

The building will almost triple the size of the original HMH and will be the nation’s fourth largest Holocaust museum and the first to be fully bilingual in English and Spanish. Two-thirds of the original building was razed to make way for the new three-story structure that will house a welcome center, four permanent galleries and two changing exhibition galleries, classrooms, research library, café, 200-seat indoor theater and 175-seat outdoor amphitheater. The new building will be named Holocaust Museum Houston, Lester and Sue Smith Campus. Known for their generous philanthropy throughout the Houston area, the Smiths donated a $15 million matching grant, the largest gift in the history of HMH.

Besides the vastly expanded gallery space, there will be new technology, gardens, outdoor spaces, and the amphitheater. The first floor is adding two new galleries: the Rhona and Bruce Caress “And Still I Write” Young Diarists on War and Genocide Gallery, which revolves around 18 young diarists, including Anne Frank, and the Human Rights Gallery, which features educational displays of all UN-recognized genocides as well as tributes to international human rights leaders.

The second floor will be host to quadruple the current classroom space, a professional performance-sized stage, the Jerusalem stone sourced from Israel and etched with the names of 986 Houston-area survivors, and the Moral Choices Hall and Jerold B. Katz Family Butterfly Loft, a three-story loft, with 1,500 butterflies symbolizing the 1.5 million children that perished in the Holocaust.