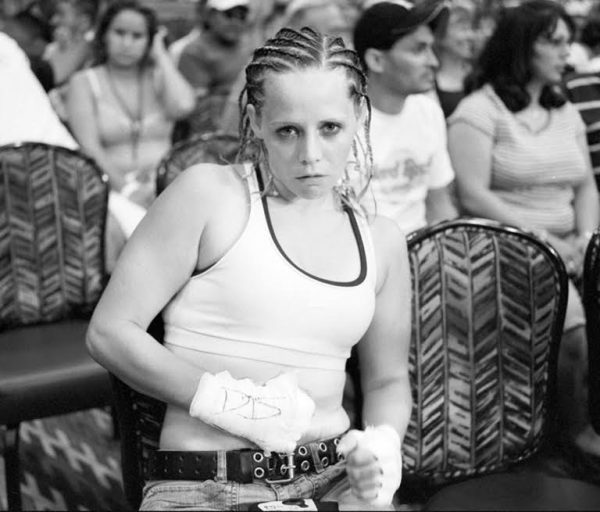 In Ars Poetica, Archibald MacLeish famously stated that “A poem should not mean / But be.” This is simple, yet profound; it also outlines for us what literature accomplishes when it is at its best, when it’s transformative. In other words, a work should be far more than a mere transference of literal meaning. And, of course, this offers trenchant insight into all forms of art, including visual works. This is offered as a preface to considering the work of Delilah Montoya at PDNB Gallery in Dallas. Or as the philosopher Ortega y Gasset noted: “A work… has to be taken like Jericho.” He adds that it’s a cycloid approach, turning and turning and slowly moving closer to the image to apprehend it.

As always, Missy and Burt Finger bring heavy hitters to the gallery scene in Dallas and they do so with thoughtfulness and grace. And, in this case, they are bringing works to the public’s attention that can be seen as being quite timely— Delilah Montoya’s photographs that were part of the MoMA’s PS1 show, Body Armor. Specifically,  the gallery features work from her New Warriors series, a documentation of female boxers from the Southwest who pursue careers in boxing while simultaneously balancing familial obligations and traditional feminine roles. This, of course, readily complements the sentiments of the #MeToo movement, which any sane person should wholeheartedly appreciate and support.

However, to present sentiments in such a straightforward manner, despite the laudable impulse, is an occasion for questions that go unanswered; in fact, they are rarely, if ever, posed. Moreover, it underscores a deep failure to appreciate the means by which images educate. 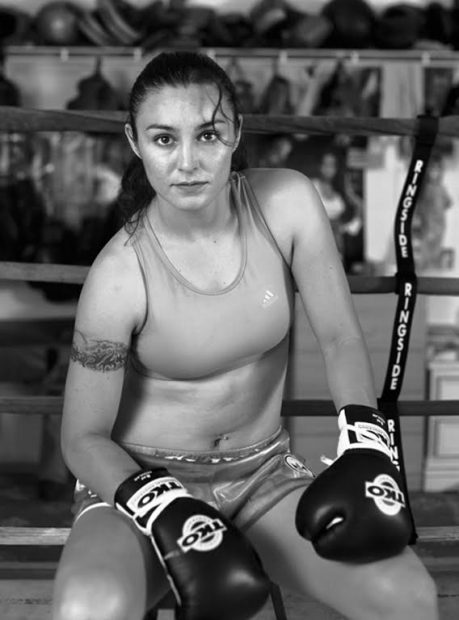 More precisely, images do not just convey meaning. Rather, they hone our imagination in new and expansive ways. Great teachers explain that the greatness of a work largely depends upon its ability to operate within the great canon of archetypal figures, images, and trajectories. (For more information on this, either read James Hillman, former director of the Jung Institute, or look at his videos online that either treat the roots of imagination or outline his own thoughts on Jung’s Red Book.) Spoiler: it boils down to an argument against the factual, the merely literal. Hillman asks that we move grandly through the world by engaging our innermost participation in mythos and offering an utterance “outside” that is worthy of the extravagance of our interior life. And we should ask that artists do this in a manner that is especially huge and grand. 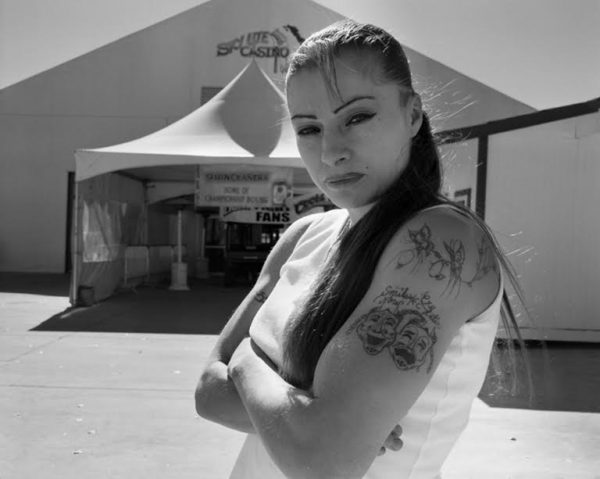 Specifically, Montoya’s images include the following: Doreen, 2006; Jackie, 2006; Lil Loca, 2006; Elizabeth Pink Panther, 2006; and, lastly, Audrey Resting in her Corner, 2005. All of these images present Latina boxers doing precisely what they most desire to do, despite the fact that they are transgressing traditional boundaries. However, how far does this take us imaginally and, thus, how far can it take us toward righting wrongs and bringing women to the fore in meaningful ways? These works tell us, quite literally, what is happening on a cultural level, but they don’t offer ingress into a broader world that elevates and remakes us by virtue of images that, ultimately, are irreducibly brilliant — images that simply radiate and do not seek to simply “mean” in the way that MacLeish articulates. 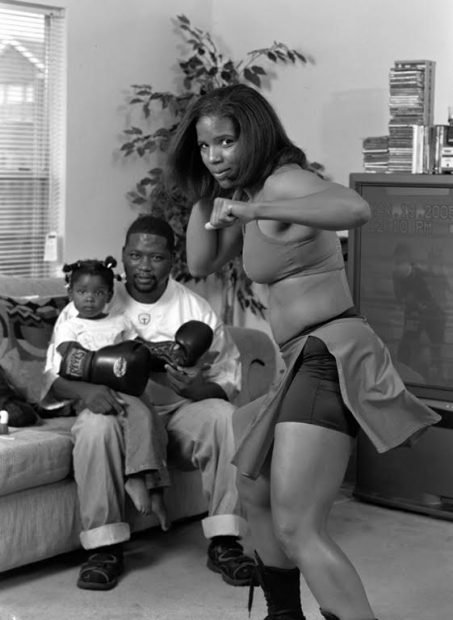 When is art profoundly true and when is it functioning as a propaganda device? And is there a hierarchy in art to which we should acquiesce? For example, I once had a gallery owner tell me, “Plastic grapes from Michael’s MJ Designs are every bit as valid as a Duccio because they both give people pleasure.” This person, it should be said, is no longer in business, or even in Dallas. But the statement dumfounded me and left me wondering when an odd sea change occurred that leveled the aesthetic world to a flat surface in which everything, to use a contemporary cliché, “is what it is.” 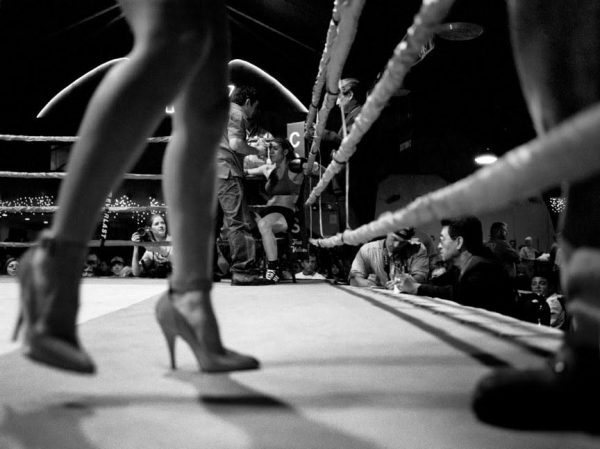 Montoya’s images are skillfully produced and I could not agree with her impulses more profoundly; however, the experience of art should outstrip any and all “isms.” When it’s at its best, art immediately bypasses our overrated noggins and pierces a more southern sphere, just behind the sternum. Thus, when work is created that is the product of an idée fixe, no mater how fine and noble and morally correct, you may as well resort to reading newspapers, listening to radio hosts and attending Meet Up groups for like-minded folks. And this is never more sensitive terrain than when it comes to the “MeToo” movement and attendant feminist causes — which, again, I favor wholeheartedly.

I found it interesting that a show featuring work by Paul Sokal was in an adjoining room. Each of his photographs shows an oversized image of a single thermostat, old camera, or other item from decades past. Is it about memory? Or is it another case of “it is what it is”? It functions as a kind of magic theater for the mundane. And this may give some people inestimable pleasure. 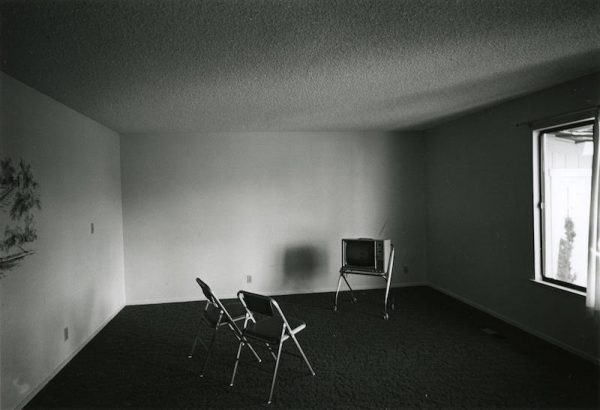 Bill Owens, 1973, from his Suburbia series

However, I felt far more enlivened when I peered around a corner and glimpsed an iconic Bill Owens image of two folding chairs in front of a blank portable television. The ceiling in the depicted room is captured at an odd angle and the piece is unnamed. It is not even dubbed Untitled. I found it stunningly apt; the Owens image conferred upon me a place as forlorn as any terrain in Dante or Cormac McCarthy. It’s our own blasted landscape and we would do well to recognize it for precisely what it is. Thus, it became an occasion to think about things differently, to see differently. Take a look. It’s tucked away in Burt’s office — which is typically open on weekends. It’s worth the trip.

At PDNB Gallery in Dallas through December 29, 2018

Delilah Montoya at the Transart Foundation for Art...