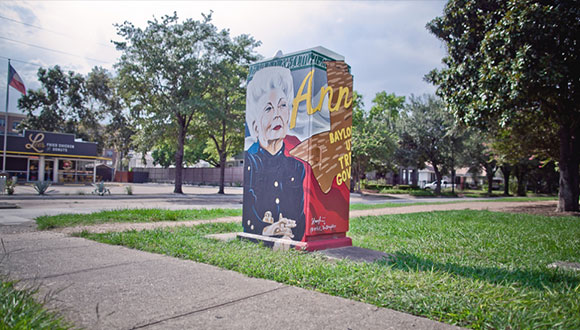 A mini mural in Houston by Tra’ Slaughter

UP Art Studio, a design house based in Houston, Texas, announced today that it has a contract with the Austin government to bring its Mini Murals project to the city. Originally established in Houston, the project, which invites artists to paint on traffic signal control cabinets, has transformed more than 200 of these silver boxes into murals in the round.

The Houston edition of the project was the topic of a dynamic discussion initiated by Rainey Knudson’s article Please Stop Painting The Electrical Boxes (A Public Art Proposal), which was published in summer of 2017 on Glasstire. (And subsequently, the subject was discussed in a podcast featuring Knudson and Christina Rees.) Prompting many responses from community members both in support of and in disagreement with Knudson’s conclusion, the article went viral, and discussions about the project continued on the pages of the Houston Chronicle and over the airwaves at KHOU.

The initial round of Mini Murals in Austin will be funded by the city’s transportation department. This move is part of the city’s larger, long-running initiative to fill its streets and parks with public art, as one of the department’s employees, Katherine Gregor, explained: “The Artbox Program is just one way we are moving to make Austin streets more people-oriented — better, more lively places for people to walk and bike and express the special character of our community.”

Noah Quiles, who founded Mini Murals along with Elia Quiles, said that the program is also seeking more sponsors in Austin. He further broke down the cost of executing one project: “The cost to sponsor a mini mural is $2,500, with $1,000 going directly to the artist.”

Currently, the project is accepting applications from Austin-based artists. The deadline to apply is December 30, 2018 at 11:59PM.