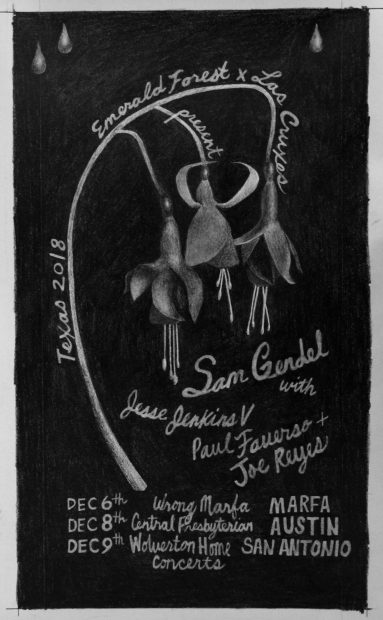 Glasstire’s guest editor Neil Fauerso has organized three upcoming evenings of musical performances across the state of Texas. Each show will include sets by four musicians who all have distinctive sounds and backgrounds: Sam Gendel is known as a saxophone player; Jesse Jenkins for his work with the Austin, Texas band Pure X; Paul Fauerso for his role as a founding member of the Bay Area psychedelic funk band The Loading Zone; and Joe Reyes for his regular tours across Texas and the U.S., and for his bands Buttercup and Demitasse.

Neil Fauerso told Glasstire more about what inspired this particular lineup of artists:

“This is a very special lineup for me. I’ve been listening to my dad play music since I was born, basically. When I was four years old we performed the song from An American Tale ‘Somewhere Out There’ for Joe Namath and he wept (true story). In my opinion my dad has never sounded better, more soulful, more present. Jesse Jenkins became a very close friend over the last few years and I’ve always loved his music. I saw him play a show last year and it was so great, at one point he was doing an almost acapella soul coda to one of the songs and it was incredible and people in the crowd were talking. And I thought to myself: next year, we’re putting you in a church.

And with Sam Gendel, my dad and I saw Moses Sumney in Austin last year and Sam opened for him. It was so exceptional and audacious (covering Rahsaan Roland Kirk!) that I approached him afterwards and asked if he wanted to do some solo shows in Texas. I’m very excited it came together; I almost can’t believe it. I think it’s going to be three really special shows.”

The three shows are scheduled for December 6 at the Wrong Store in Marfa; December 8 at Central Presbyterian Church in Austin; and December 9 at Hill Snyder’s venue, Wolverton, in San Antonio.

Tickets can be found at the above links.