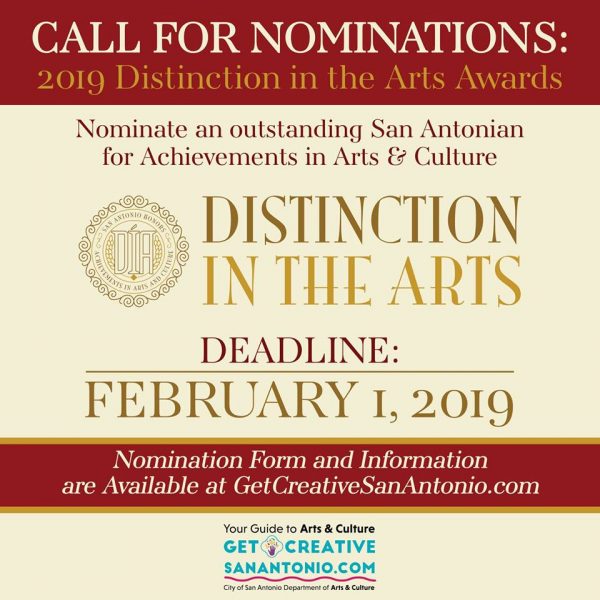 The City of San Antonio is now accepting nominations for its 2019 Distinction in the Arts Awards. Since the program was established by San Antonio council member Roberto C. Treviño in 2015, it has honored 16 of the city’s creatives.

In the program’s first year, Distinction in the Arts Awards were given in five categories: visual art, literary arts, music, supporting organization, and dance. The 2016 and 2017 years saw some category omissions, while others were added, including: arts administrator, video, and patron/foundation. As 2018 marked the year of San Antonio’s Tricentennial, rather than selecting a new round of winners, the city instead chose to honor all past awardees with an evening of performances and readings. A list of past visual art awardees is below:

With the 2019 Distinction in the Arts Awards comes a marked change — this will be the first time awardees will be nominated by the public. After that nomination period closes, the San Antonio Arts Commission will choose who will represent the city in 2019.

Nominations will be accepted from December 3, 2018 through February 1, 2019. Although nominees are not required to be San Antonio residents, it’s stipulated that “the significant contributions [made by nominees in their fields] must have been for the benefit of the San Antonio community and its residents.”

More details are below. To nominate someone, go here.

I would Ike. to nominate artist Vie.Diunn Harr, she coontributes her beautiful art through paintings . Teachs classes in painting. Travels to Italy to increase her teaching ability’s. Sells her paintings through out Texas. She would make a wonderful candidate and ambassador for fine arts.