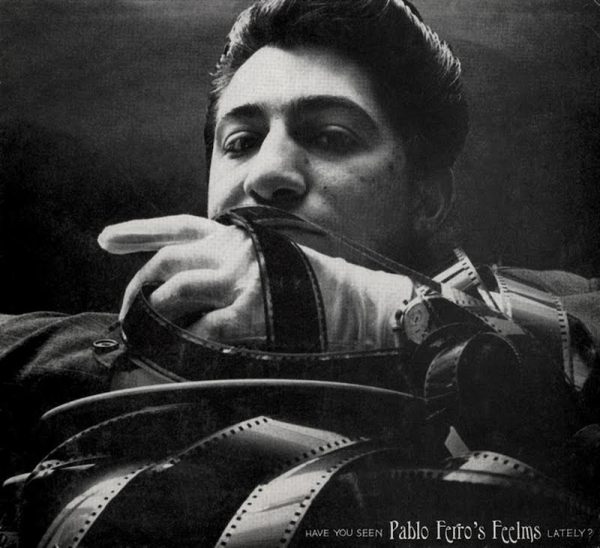 Legendary Cuban-American designer-filmmaker Pablo Ferro, best known for creating dynamic movie title graphics, sequences, and trailers since the 1960s, cut to black last week at the age of 83. You may not know his name, but you’ve likely seen his work and have definitely seen his influence. The self-taught comic artist, graphic designer, animator, photographer, and editor had been an experimentalist-for-hire for six decades, collaborating with such directors as Stanley Kubrick, Norman Jewison, Hal Ashby, Jonathan Demme, and Gus Van Sant.

Ferro is normally referred to simply as a “Title Designer,” but that’s a limiting abbreviation. He was indeed a master of typography and should be celebrated for it, but his title treatments were often just one ingredient within kinetic constructions that aggressively explored the temporal and sensorial possibilities of moving image media. Ferro was an early pioneer of rapid montage, split-screen techniques, and optical effects. His unconventional sequences mixed and remixed type, art, still photography, film footage, sound, and music. While his approach was continually changing, he was always concerned with creating visual compressions, collisions, fragmentation, and layering. And he was dedicated to orchestrating these experiences with a vigor, winking humor, and teasing tension that suggested much more than was actually on screen.

In addition to being a longtime Pablo Ferro fan, I’ve had the honor of presenting the man and his work multiple times (including a 2011 event at the Museum of Fine Arts, Houston co-presented by AIGA-Houston and Rice Design Alliance) as well as the great pleasure of getting to know him a bit through our occasional conversations and correspondences over the past 15 or so years. There was little information about him available when we first began talking, long before the blossoming of the online publication Art of The Title and the release of the 2012 feature-length documentary Pablo. He was extraordinary friendly, open, and generous with me, and I believe he was appreciative of my interest in aspects of his work that go beyond traditional graphic design and into the realm of experimental film. Since his passing, I’ve been thinking a lot about the impact of his efforts, and his unique, long-held position at the nexus of art, design, film, counter-culture, and mainstream media. I felt compelled to share some images, information, and thoughts here — as a reminder for those who know, and a primer for those who might want to. 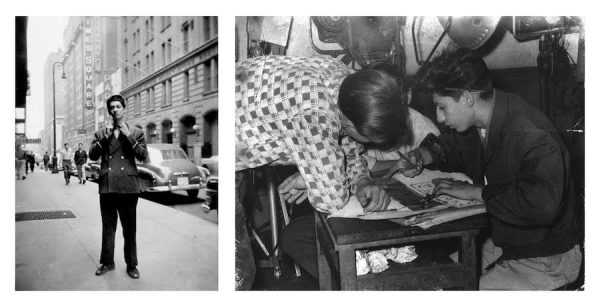 Pablo Ferro was born on Jan. 15, 1935, in Antilla, Cuba, and developed an interest in drawing at an early age. He spent most of his childhood on a remote farm in Cuba until the family moved to bustling New York City when he was 12 years old. While in high school, his job as an usher at a 42nd Street movie theater exposed him to all kinds of cinema and launched a lifelong fascination with moving images. He occasionally stole a few film frames from the theater’s projection booth for study, taught himself animation from an instructional book by animator Preston Blair, and set up a homemade animation studio with friends.

Just out of high school, Ferro got a number of opportunities to further sharpen his sense of graphics, illustration, narrative flow, and the mechanics of manipulating time and motion in film. He worked as an inker and artist at Atlas comics alongside pre-Marvel Stan Lee, before moving to a commercial animation studio and learning from former Disney animator Bill Tytla. Graduating to director, he worked at a number of commercial studios animating, among other things, Paul Rand’s drawings for El Producto cigars and the first color NBC peacock.

By the early-1960s, Ferro had gone from ambitious teenage tinkerer to head of his own production company and wild-card darling of Madison Avenue. With collaborator Fred Mogubgub, he began creating a variety of wildly innovative films that drew attention from an advertising industry hungry for dynamic, new ideas. Among these was a great opening film for Jerome Robbins’ 1961 stage play Oh Dad, Poor Dad, Mama’s Hung You In The Closet and I’m Feeling So… Sad using found footage, and striking sequences created for Hartford Channel 18 which compressed through radically rapid editing many hundreds of still photos and different typefaces into 20 seconds. The latter was the first of Ferro’s “quick cuts” montages, and was the fastest editing to ever hit television screens.

A fantastically frenetic film made especially for the 1963 Clio Awards unleashed such an absurdly eclectic arsenal of experimental techniques that one can only imagine a room full of Mad Men scratching their heads and cursing the dawn of a new era. In creating these playful, cool-yet-haywire sequences in the early 1960s, Ferro had already found the styles and tones of the late 1960s. He’d also established a confident practice of creative cacophony that would continue throughout his career. 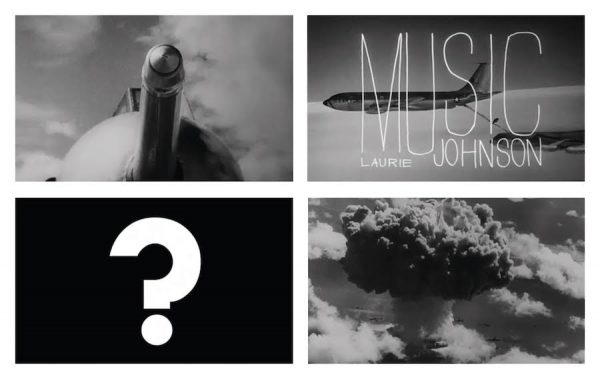 Stills from Dr. Strangelove opening sequence (above) and trailer (below), 1964.

Director Stanley Kubrick took notice of Ferro’s unique talents, and convinced him to come to London for most of 1963 to do work for the upcoming film, Dr. Strangelove. Ferro’s first-ever film title sequence would become his most famous one. While he and Kubrick were discussing the film’s themes and human nature in general, Ferro brought up that most of man’s inventions seem overtly sexual. They quickly stumbled upon the revelation of showing B-52 bombers refueling in air, as if having sex among the clouds. Kubrick thought of shooting models, but Ferro insisted they find actual government film to use. He was able to cull great footage, with its bobbing of the camera up and down adding to the innuendo, and he cut this to an airy instrumental version of the song Try A Little Tenderness.

The conventional placement of small credits in different areas of the screen proved distracting, so Ferro’s solution was to do thin, elongated and stacked credits across the entire screen in order to fuse the text and imagery into one experience. This short Dr. Strangelove sequence — a fine assemblage film in and of itself — is a beautifully crafted, profound joke. And while its pencil-thin, hand-drawn lettering style was copied by countless others and reprised several times by Ferro himself (Stop Making Sense; Men In Black), it was never quite used in the same way.

Ferro’s trailer for that film is another, altogether different masterpiece — a bold and darkly funny, quick-cut succession of large, single words and bits of footage synced tightly with tense music. The Dr. Strangelove trailer exemplifies Ferro’s unique approach to language in motion, as he activates the text to “speak” through rapid, rhythmic editing, and then deftly punctuates its questions, statements, and titles with surprising infusions and interruptions with inserted moments from the film.

Following the Dr. Strangelove projects, Ferro’s reputation as a one-of-a-kind audiovisual magician was solidified, and he continued to push and pull at a variety of techniques. His opening title sequence for Woman of Straw featured high-contrast still images bathed in changing colors, while his opener for The Russians Are Coming, the Russians Are Coming animated Russian and American flags dueling to occupy the screen. At the same time, he continued to create trailers for such movies as Kaleidoscope and A Fine Madness, television commercials for County Fair Bread and Kreisler watchbands, and an animated stitching logo for Burlington Mills that was used for two decades.

Ferro experimented with split-screen techniques in commercials for Beech-Nut Fruit Sours, a dual-projection film for Singer’s pavilion at the 1964 World’s Fair, and a sequence for the Ed Sullivan Show. In 1967, his pal Hal Ashby was working as the editor of Norman Jewison’s The Thomas Crown Affair, and was struggling to quicken the film’s pacing. He suggested they bring on Ferro to compress time through the use of split-screen compositing. With the help of Ashby and a special lens borrowed from Disney, Ferro did such beautiful multi-screen work that the director asked if he could then make the sequences longer. 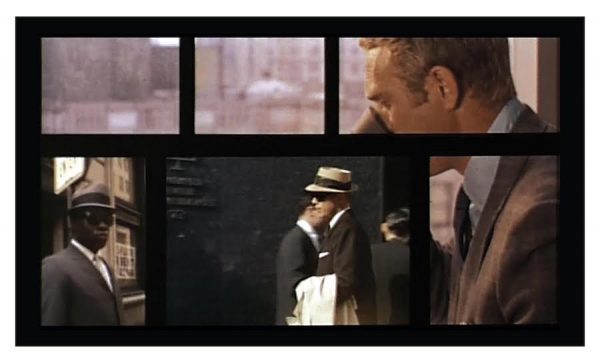 The film’s pivotal polo sequence is a masterful, musical choreography of up to 60 screens at once, remixing a simple scene into a thrilling movement, and energizing the attraction at the heart of the film’s romantic dance. Ferro’s opening title sequence for the film — considered one of his best — also uses split-screen panels but with color-tinted still images and graphics. Beyond this stylish prelude and his dazzling polo scene centerpiece, the integrated use of split screens during the film’s coordinated robbery is a significant leap of Ferro’s efforts beyond style, moving the film’s narrative and building its tension by showing simultaneous activity in different locations coming in and out of focus.

Ferro’s great work on The Thomas Crown Affair convinced Steve McQueen to give him full control on his next title sequence project, Bullitt. It also forged his lifelong association with friend and collaborator Hal Ashby. Over the following decade, Ferro created opening title sequences and trailers for Ashby’s Harold and Maude, Bound For Glory, and Being There, as well as co-directing with Ashby the Rolling Stones documentary Let’s Spend The Night Together.

He created unique trailers throughout the ’70s and ’80s for films including Kubrick’s A Clockwork Orange, Norman Jewison’s Jesus Christ Superstar, Lindsay Anderson’s O Lucky Man, John Boorman’s Zardoz, John Carpenter’s They Live, and countless others. Beginning with 1977’s Citizen Band, Ferro worked with director Jonathan Demme for more than two decades, alternately creating title graphics, sequences, and trailers for Stop Making Sense, Married To The Mob, and Philadelphia. His opening sequences for Gus Van Sant’s films in the 1990s are every bit as creative and well crafted as those he’d made decades prior. His opening for To Die For is a fast-paced tabloid/news media montage that throws audiences into the fractured aftermath of the story, while the slow layering of kaleidoscopic refractions in his opening for Good Will Hunting is a glimpse into the complex mind of its main character.

It’s easy to take Ferro’s work for granted, because there are so many of his little spells in the fabric of film and television, spanning six decades and three generations. Ironically, he has been both conspicuous and invisible. Did I mention that he had something to do with the Cheers opening sequence? And he designed the Beetlejuice logo? And Napoleon Dynamite? Or that he was the supervising editor of Michael Jackson’s Beat It video? Oh, and his TV-sex montage sequence in Midnight Cowboy is great. And that L.A. Confidential opening montage. And we haven’t even gotten into the nitty gritty of the inventive technical wizardry used to do all of that animation and image manipulation before digital technology existed. Or all of the famous artists who lost themselves at his parties… should I mention that Warhol and Yoko Ono showed their films at his New York loft? Oh, and his experimental porta-pack video stuff and his romantic comedy Me, Myself and I.

There’s so much more to the Pablo Ferro story, but it’s difficult to parse what’s significant and what’s peripheral in the case of this audiovisual alchemist’s life’s work and work’s life. I’m realizing just how much is connected by this one, funky thread. And I’m realizing that it is impossible to write an obituary overview for such a long-sustained cultural meddler. So maybe let’s just call this article a teaser.

I’m reminded of something Ferro once told me about his eye-popping trailer for A Clockwork Orange. Kubrick had confidently given him complete freedom, and Ferro had concocted such a fast-paced frenzy of film footage, repeated words, graphics, and flash frames that he was stuck and had no idea how to end it. So he just randomly cut it. No landing. Jump cut. Mic drop. Silence. Leaving only the mind’s after-images of its flurry of flashes fading into the black of a sudden void and the lingering unanswerable question, “What the fuck just happened?” No one really knows. But the short answer, then and now, is: Pablo Ferro. 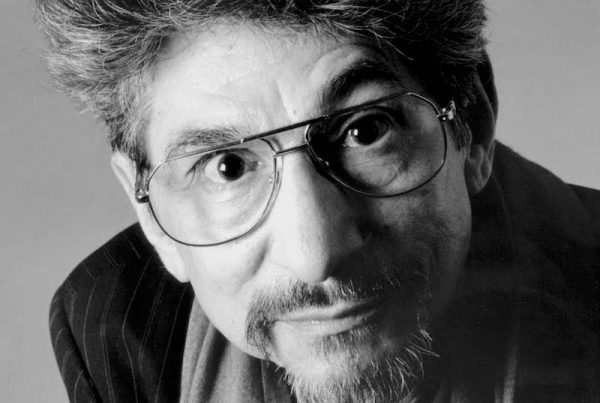