Incisive and Subversive: Leslie Hewitt at the Menil Collection 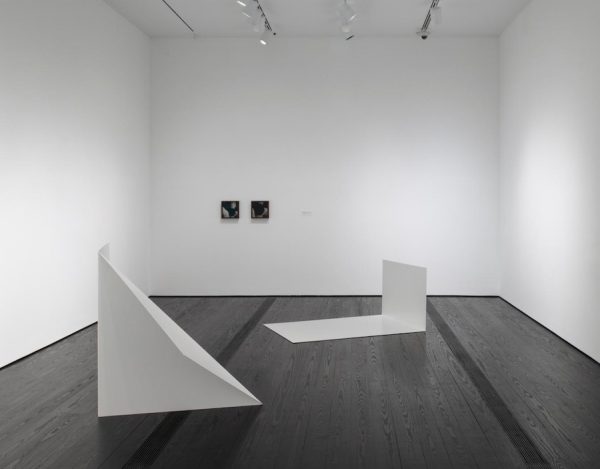 Consider Leslie Hewitt’s current solo show at the Menil Collection in Houston in relation to her previous collaboration with Bradford Young, also at the Menil, titled Untitled (Structures), in 2012. Both shows sprung from the same archive — the Edmund Carpenter and Adelaide de Menil collection of Civil Rights-era photography. In Untitled (Structures), Hewitt and Young cinematically excavated sites previously associated with the civil rights movement, their slow panning and extended shots eliciting the energy, injustice, pain, and resolve of a bygone era, still pulsing through walls and foundation. Untitled (Structures) asks the question: what becomes embedded into architecture (in this case: socially, politically, racially) long after the event has passed?

It’s therefore no surprise that Hewitt, in this iteration of her exploration of the same photographic archive, has again revisited architecture, albeit this time more abstractly. The three steel forms on show at the Menil that comprise Where Paths Meet, Turn Away, Then Align Again (2013) — in their sharp, 90-degree angles — reference architectural planes, fragments, and building material. They are powder-coated white. But while the methodology behind Untitled (Structures) was to, through slow or extended viewing, conjure an apparition of the past, the content driving Where Paths Meet diverges from this earlier path: It is more incisive, subversive, and dangerous. 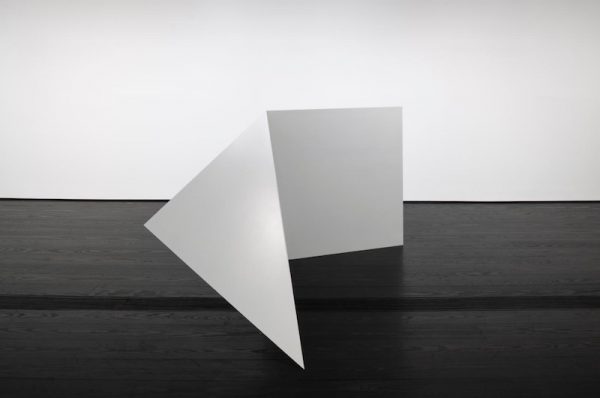 Here Hewitt asserts an oft-overlooked concurrence: the civil rights era and minimalism. By re-contextualizing and conflating minimalism historically with the civil rights era, Hewitt simply (but sharply and intelligently) lays the groundwork for important and revelatory institutional critique. Minimalism — macho, essentialist, puritanical — left little room in its philosophy for anyone other than the few (mostly white guys) who adhered to its strict principles in the first place, and didn’t much open itself to the influence of concurrent historical moments. As those excluded often satirized or parodied minimalism throughout post-minimalism and beyond — Eva Hesse’s Accession II (1968) immediately comes to mind — Hewitt evades this well-trodden strategy. She instead, cleverly, adheres to and exacerbates minimalism’s strictures as a force of agitation, and heightens Fried’s notion of theatricality in order to expose the form’s inability to relate to anything beyond itself, as well as the problematic social erasure and denial that minimalism’s asceticism entails. 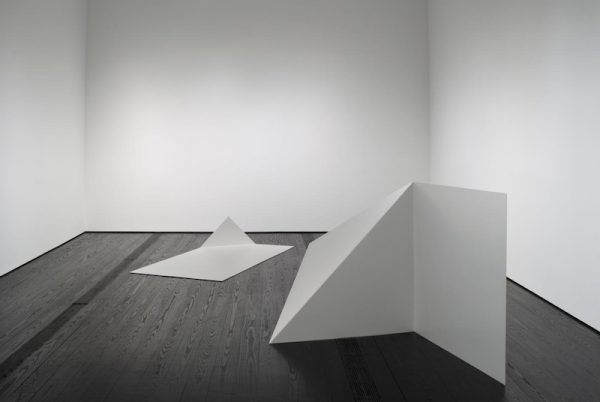 Hewitt does this in two ways: through context and formal dynamism. It’s important to note that in this installation, there is not a one-to-one relationship between subject and object, but rather a slingshot effect between the viewer and the three sculptures. This effect is less sculptural and more directional: Although the angles on the sculptures are 90 degrees, each sculpture is offset from one another and in the space, set askew at about a 15- to 20- degree angle. This sets the viewer in motion, pinging from one sculpture to the next like an Atari ball. We start off with the piece to the right from the entrance, and its sharp angles thrust us towards the subsequent one, until we reach the third one on the left, its upturned corner flinging our eye to the ceiling. Our eyes then follow Newman-esque lines demarcating the track lighting across the ceiling as they fall back down the opposite wall, ultimately landing on a photolithographic diptych titled Where Paths Meet, Turn Away, Then Align Again (Distilled moment from over 72 hours of viewing the civil rights era archive at the Menil Collection in Houston, Texas) (2012), which details an archival photograph from a 1965 voting rights march. The diptych’s dualistic graininess and cropping of a woman’s head — as if Hewitt is unfurling a secret hiding in plain sight — instills in us a sense of unease. It’s presented as evidence, or as testament to a woman burdened with bearing witness to the formalistic violence before her.

This context renders Hewitt’s formal decisions heightened and, more importantly, socially and racially provocative. The sculptures’ sharp angles are exacerbated by the thin grade of the steel, and threaten (like daggers) to pin us to the wall as we walk by and around them. The snowy texture of the powder-coated steel in conjunction with the sinuous curvature of the bend in the steel (Hewitt created the angles by bending the steel rather than cutting and welding it) wraps us up in a dance of eroticism and precariousness. 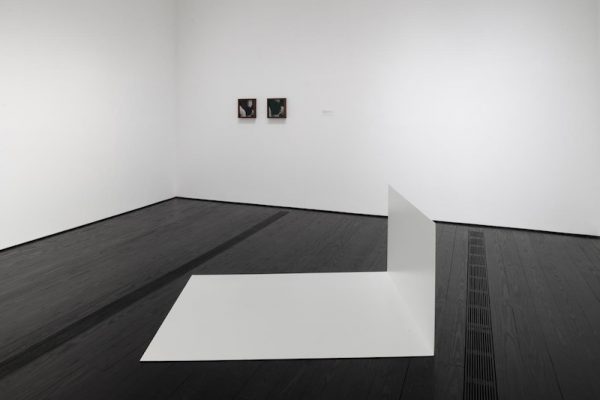 The color white — racially charged, yes — here serves more prominently as a symbol of erasure, or perhaps a blank slate, or maybe even, most frighteningly, the void. Yet it also creates the kind of soothing siren call that is most dangerous of all. One of Where Paths Meet’s sculptures, the one left of the entrance, lies before us on the floor like a sinister pool or portal. It beckons us to fall into it, lest we’re impaled by that subtle-yet-decisive upturned corner.

On view at the Menil Collection in Houston through January 6, 2019.