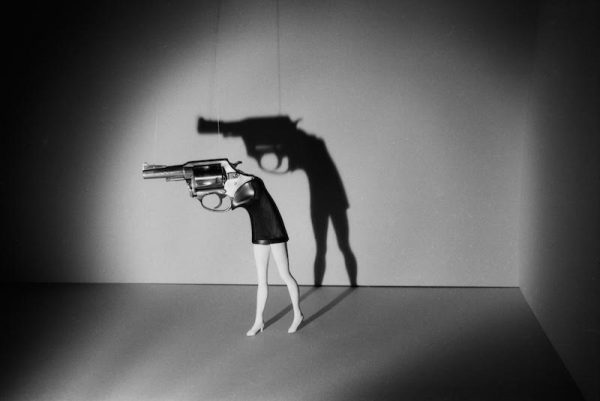 [Note: for a recent Glasstire conversation with the artist, please go here.]

There are two well-known tributes to photography in popular music that were released decades apart. In 1973, Paul Simon debuted the song Kodachrome, an endearing homage to Kodak’s patented color film technology, and in 2005, OutKast came out with the hit Hey Ya!, referencing Polaroid with the refrain “shake it like a polaroid picture.” The dye-destruction Cibachrome prints in Laurie Simmons’ current solo retrospective Big camera/Little Camera, at the Modern Art Museum of Fort Worth, are in a way their own sort of homage to photography. They offer lush, vivid examples of the plasticity of our fabricated world and fabricated culture.

Simmons made the transition to digital photography a few years ago, and benefits from the latitude that it affords her, but it’s her early color photographs in Big Camera that best reveal how advertising, consumption, and gender roles invade our lives and consciousness. Simmons’ staging of setups with life-sized sex dolls, miniature figurines, and puppets, along with some of her stage sets and collages, grant us an artful distance to evaluate our own expectations and perceptions of our troubled culture. 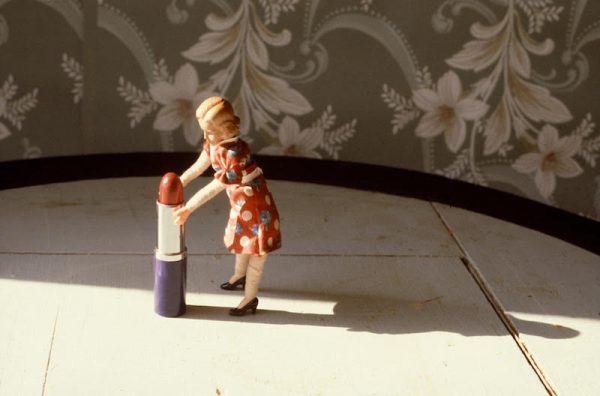 There are dozens of Cibachrome prints among the 80-plus photographs in Simmons’ retrospective, and they cut a formidable swath through the photographer’s dense bodies of work. Pushing Lipstick, for example, from 1979, depicts a tiny doll slightly bent and grabbing a tube of red lipstick (large and suggestive) as if we’d caught her mid-twist. Her red hair and floral patterned red dress pop with a vivid plastic glow that emphasizes the lush dyes of the color-process print. Simmons’ luxurious use of color endures; these prints glow as brightly today as the day she first printed them. But subject-wise, they also deftly reveal some problematic baggage of our recent past and agitated present. Prescient back when they were made, and still charged today, they’re not so much nostalgic as they are tragic. Extra time has added this element. 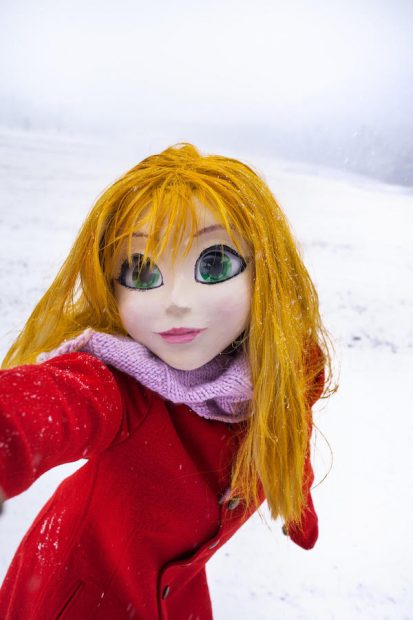 In a public conversation with her husband, the painter Carroll Dunham, at the Modern a week ago, Simmons shared her thoughts about the Kigurumi characters she later photographed in works like Yellow Hair/Red Coat/Snow/Selfi, from 2014. The Japanese term describes people who dress up and mask themselves as doll and animal characters. “I always thought that if I’d found Kigurumi — this character that existed in the interstitial space between human and doll — I probably would have given up years ago. Looked like a doll, felt like a doll, but it was human and it would respond to my command. I felt like I’d been looking for this my entire photographic life. It’s as if the dolls had come alive,” she said. “There are so many possibilities for changing your persona and changing yourself that often you don’t know who you’re really interacting with or talking to [online].”

I was reminded of Dolores’ phrase while considering two works in Big Camera: 2017’s The Mess, in which Simmons recognizes the grotesque heft of the all the disposable material she has been photographing all along, and Props, 1976-present. The seemingly endless river of disposable plastic packaging in Mess, in their entire pre-consumed rainbow splendor, reads as a glowing radioactive reflection of the mound of toys in Props, which are displayed in their own gradient color configuration. We’re back at the beginning now, to Simmons’ cautionary observation of advertising, consumption, and constructed realities, and we’re again aware of how these problems have persisted in the time and space between the earlier and later photos. 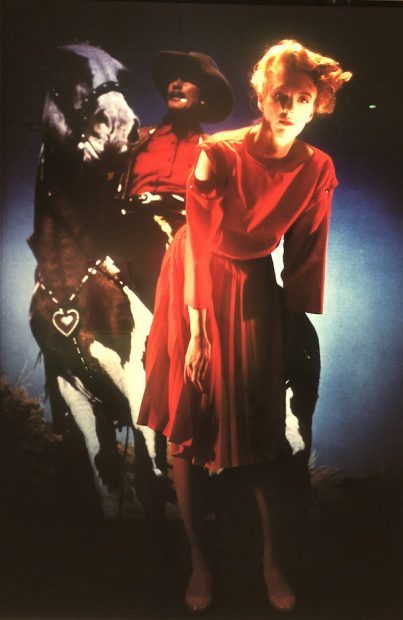 Simmons’ work reflects the sensibilities of “someone from the generation raised on television and advertising, and as a woman who came of age as an artist in New York in the 1980s,” as the exhibition wall text describes. The ’80s vibe resonates in Simmons’s work. In Cowboy, 1985, a picture that could alternatively be titled Cindy Sherman meets Richard Prince, a woman in a red dress is hunched over and posing like a mannequin, with a picture of a cowboy on a horse projected behind her — a suggested combination movie still and ad campaign. And although neither Sherman nor Simmons were part of the seminal 1977 exhibition that ultimately gave us the name ‘Pictures Generation’, for a band of photographers working in New York at the time (and used to describe both artists for decades now), Simmons’ connection to that group is concretized. (Simmons’ and Sherman’s friendship began in the mid-’70s, at New York’s Artist’s Space gallery, the particulars of which she revealed in the December, 2012 issue of The New Yorker.)

Another early touchstone: David Levinthal’s early 1970s photographic series Fake Barbie, and later Hitler Moves East and Modern Romance, anticipated the work that Simmons would do with her miniature scenes, although Simmons employed a more conceptual framework than Levinthal’s photographs.

Simmons’ work spans decades now, and her breadth of images and series of works can be broken into individual statements. Each one reverberates with the politics of feminism and Simmons’ poignant and focused scrutiny of gender roles, both from intentional observations, and as a result of politics catching up to her photographs. Walking Gun, 1991 [pictured at top], is a great example. It depicts a gun with the legs of a woman, and carries the undertone of a film-noir femme fatale paused in the moment before the shot rings out. The hard contour light from a single bulb spotlights the subject and casts a dark shadow, exaggerating the drama of the photograph. Decades later, this image cannot be seen outside of the context of gun violence in America. This is the power of Simmons’s photographs. Her images don’t change, but over time, their context certainly does, through the eyes of an increasingly worldly viewer.