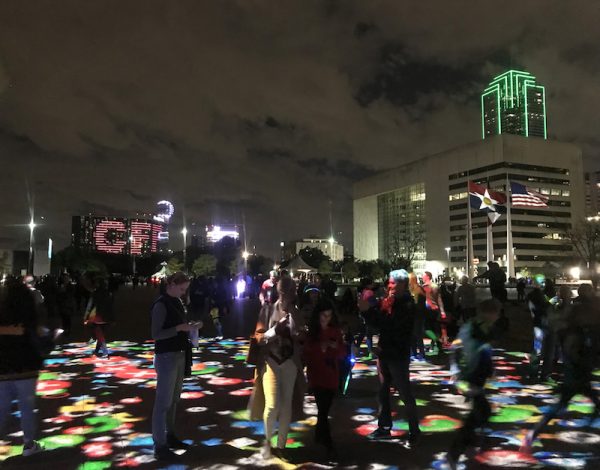 Aurora is a public, outdoor new-media biennial staged in Dallas. My experience at this year’s Aurora, which took place last weekend, was underwhelming. Perhaps my expectations were too high. Perhaps my need for dopamine-fueled spectacle jaded my response. Perhaps it was due to the change in venue. Instead of the Arts District, where it’s taken place since its start in 2010, the event this year was relocated to the area around City Hall, and for the most part, the works did not play off one another. The pulsing energy that usually accompanies the event was missing. My friend summed it up succinctly by stating: “There’s no Vegas here.”

Aurora’s mission is to provide a unique, immersive experience to the public free of charge. In previous years, works were much more immersive, requiring the audience to take an active role in their experience. I didn’t have time to see all the works this time (the weather wasn’t cooperative later in the evening), but it seemed that interactivity options were limited. I spent more time looking for and looking at, rather than participating in meaningful multi-sensory experiences. It may not be the fault of the artists. And most viewers didn’t seem interested in immersion so much as using the works as backdrops for selfies, or posting cel-phone footage on social media — which points to a larger social and cultural issue about concentration and engagement.

A major challenge for many artists, including of course new-media artists, is how to capture the public’s attention within a few seconds. It’s daunting for an artist to balance a compelling conceptual framework with an equally compelling visual experience. With the exception of a few works, I found myself much more interested in reading about them than my actual encounter with them.

On the plus side, despite threats of rain, large crowds were in attendance. I experienced a part of the city that I rarely visit. And the student work was outstanding. Kudos to the curators for giving the students a platform to shine (literally and figuratively). 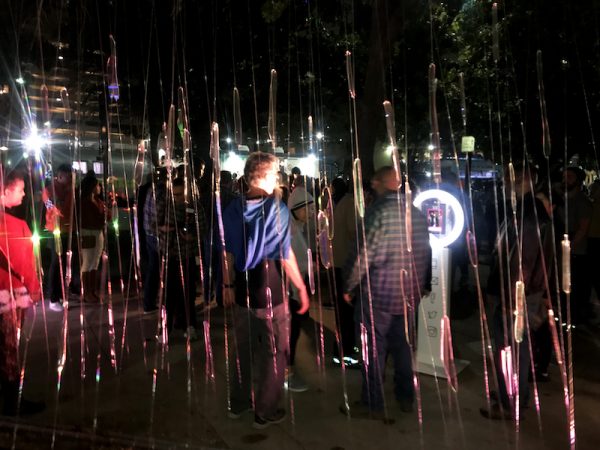 Although viewers could walk through Paula Crown’s hand-drawn Plexiglass raindrops, most just stood in front of it, using it as a backdrop for a quick selfie portrait. 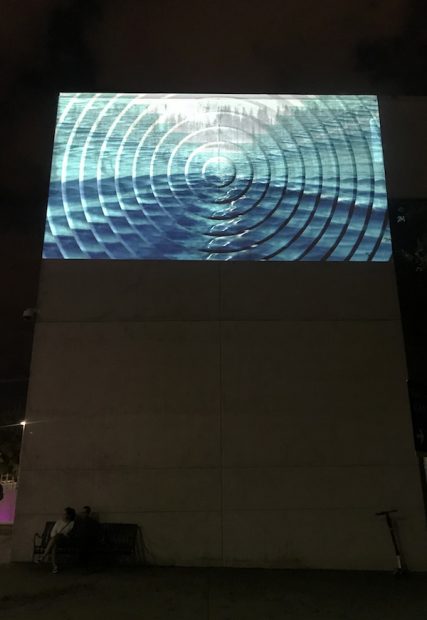 In Kristin Lucas’s work Sick Waves, the play on the title “sick” as something both ill and awesome references climate change, but the visual projection onto architecture did not sync with the concept. I wonder what this would look like projected onto water or mist. 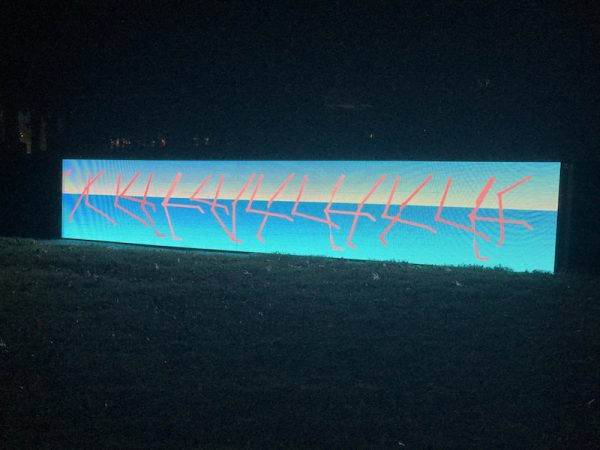 This is Lucas’ animation work referencing the flamingo courtship march. I’m not sure the viewers would connect the references to habitat or species destruction. 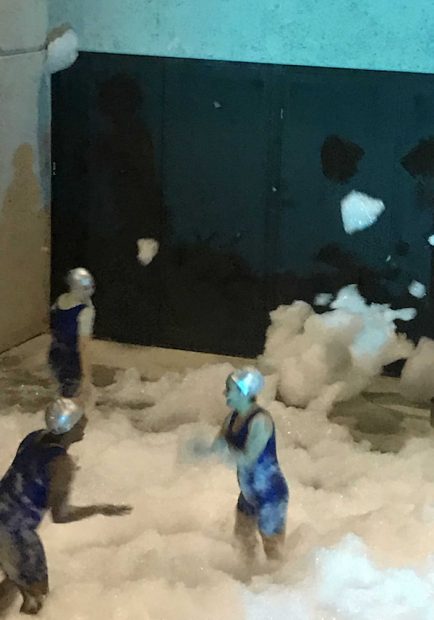 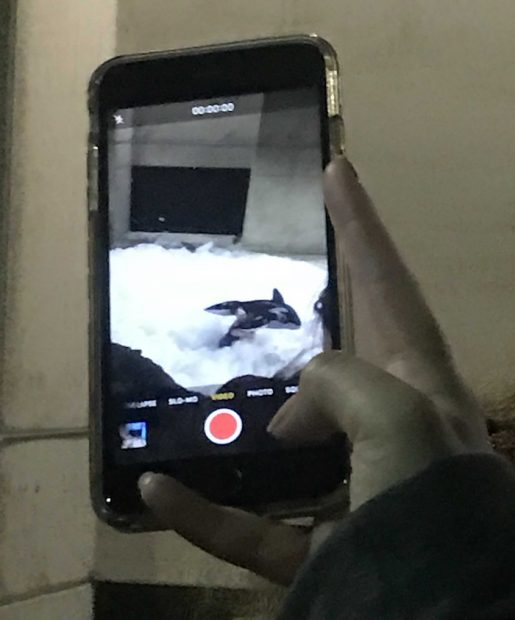 Large crowds of viewers recording the Danielle Georgiou Dance Group’s performance prevented me from seeing much, except through the mediation of other viewers’ phones. Referencing Esther Williams’ water ballet, this was a fun crowd-pleaser with lots of bubbles and not much dance. 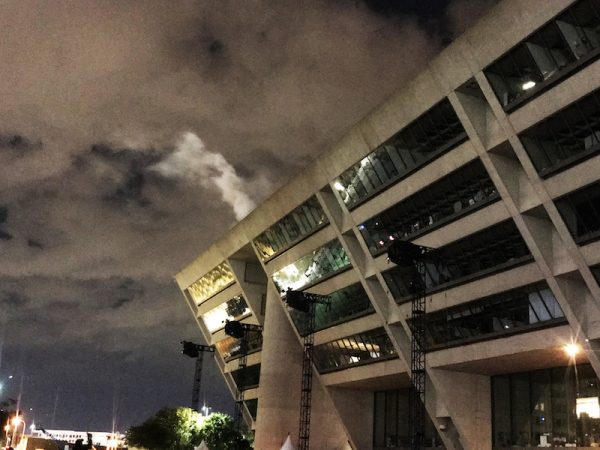 Fabian Knecht created a smoking building — specifically a smoking Dallas City Hall, which is famous for its architect (I.M. Pei) and its appearance in the 1987 Paul Verhoeven movie RoboCop. Knecht’s work was very subtle and easy to overlook if not for the illuminated caption display. 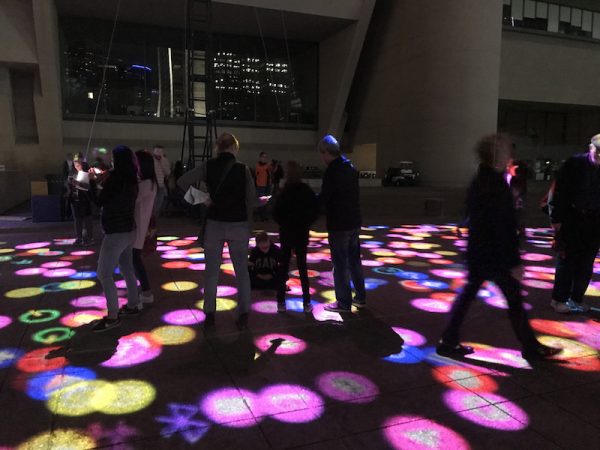 Miguel Chevalier’s work was the most immersive of the evening, but it was unclear that the icons/patterns changed in reaction to visitors’ movements. I failed in my attempts to trigger a direct response from the program. 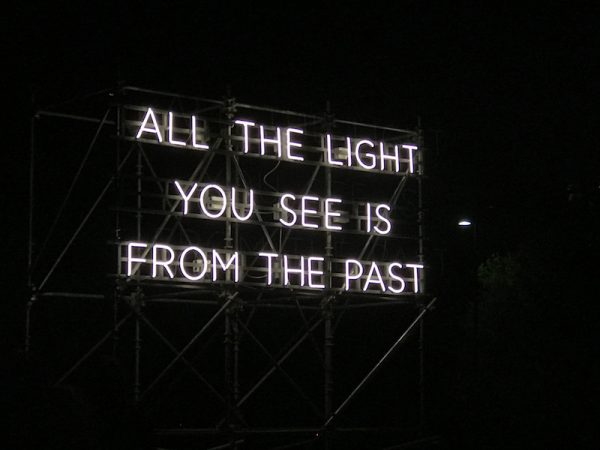 Alicia Eggert, All the Light You See, light installation, 2017 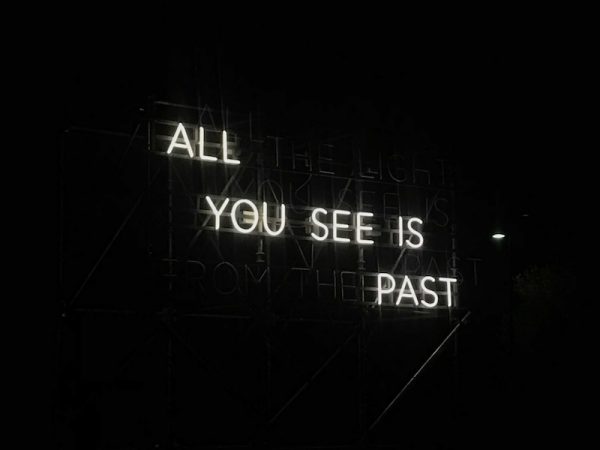 Although Alicia Eggert’s concept references the speed of light travel, the minimal neon text is a powerful statement on our current political situation and the danger of history repeating itself. 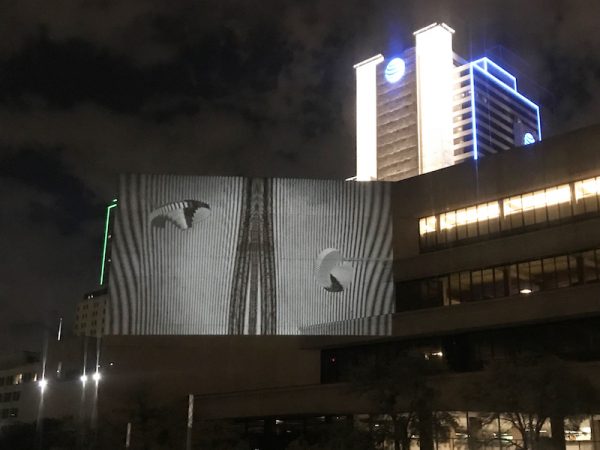 Visually compelling, Stout’s work adroitly addresses this Aurora biennial’s theme of “Future Worlds.” The projection posits a future where architecture is clothed with a sentient techno-being or membrane, beyond the human threshold of experience. 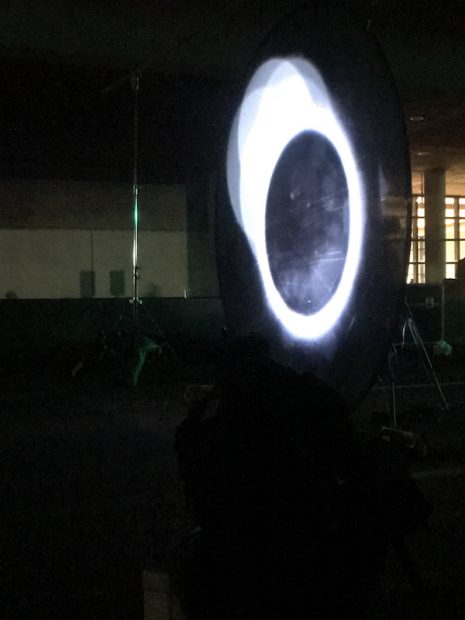 Resulting from a collaboration with scientists at a French nuclear physics research center, Herman Kolgen’s work combines light and sound energy in real time. The sound was almost unbearable, causing nausea and vertigo for viewers. Most interesting is the visual realization of an event, i.e., the energy transfer that happens at the atomic level, normally invisible to the human eye. 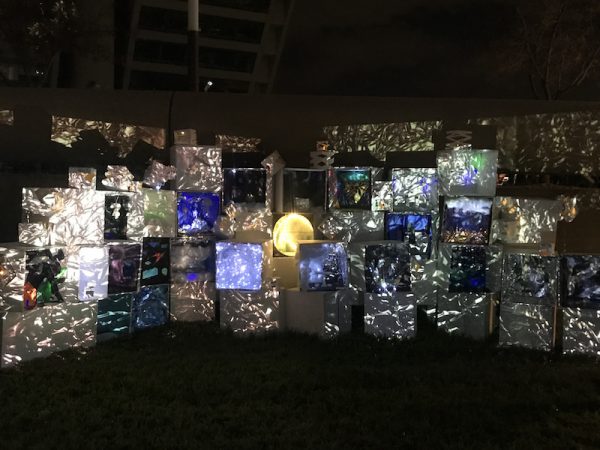 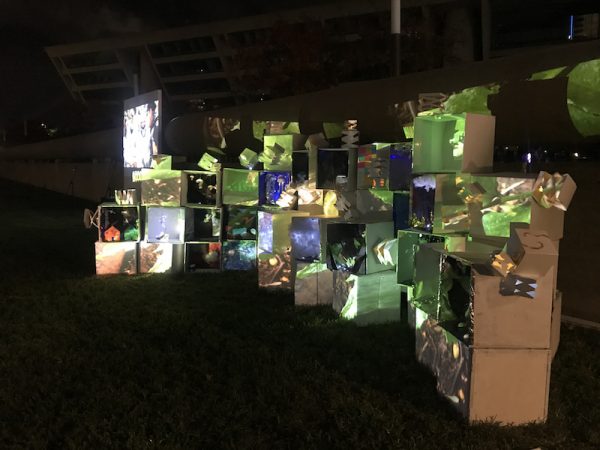 For this collaborative student installation, each Joseph Cornell-style box represents a student’s vision of the future. It was my favorite work of the evening, as video projections transformed the collective installation, simultaneously revealing and obscuring details.