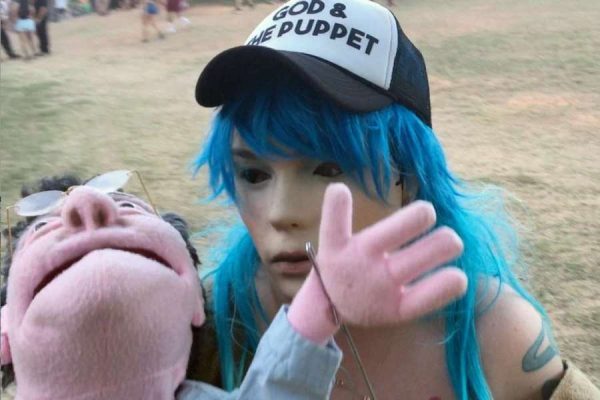 The closest I’ll come this week to watching a horror movie is scrolling through recent videos on Christie Blizard’s Instagram. They’re performance, and not horror at all, but they’re unsettling and creepy, and funny. Blizard is an artist based in San Antonio. I go to San Antonio a lot for work and meet up with artists there each time, but I’ve never met Blizard. And though she’s in her own videos, I have no idea what she looks like.

Another San Antonio-based artist, Joey Fauerso, mentioned Blizard’s Instagram not too long after Glasstire published a conversation I’d had with Joey’s brother, Neil, who’s currently a guest editor at Glasstire. Titled The Most Twisted Artists in Texas, Neil and I had, in our rushed enthusiasm for the subject, left Blizard off the list, and she’s someone we both consider properly twisted, and certainly one of the most twisted artists working in Texas today. It was simple oversight. 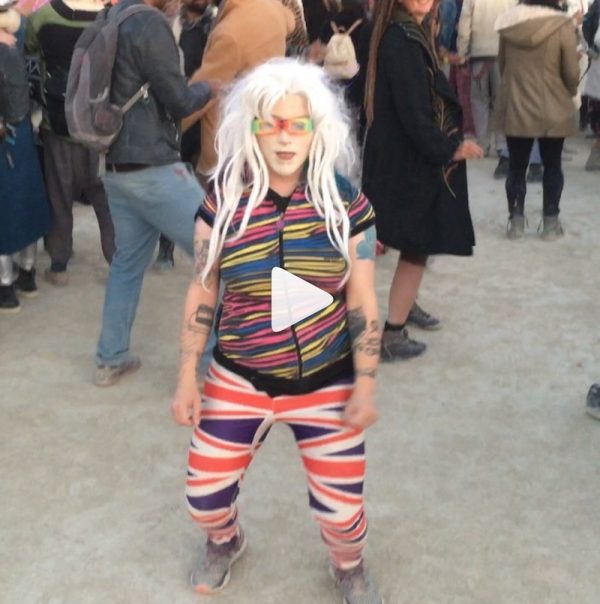 So I started watching Blizard’s Instagram. Around that time, Blizard was off to Burning Man to shoot in character, and post dispatches of herself masked and tranced out at the festival. In character, Blizard is both the synthesis and antithesis of a southwestern festival-goer: zeroed in on the EDM playing through the loudspeakers (or making the music herself on a rigged up Moog/mixer setup), Blizard, with her blanked-off mask of a face, fright wig, and bonkers ad-hoc athleisure wear, is something other attendees have to encounter on their own time, and many overlook. If they do a double-take, they see not so much a fellow human as some sort of unflappable alien being who’s reveling in and confirming an apex of cultivated festival ecstasy. Blizard’s character is not “cute” or “sexy” as the other festival-goers so aspire to be (though there is weird sex in Blizard’s character); she is instead the end result of humanity self-indulged to the point of soul obliteration. The effect is trippy and scary.

The mask is key to what makes Blizard’s performance work, and it’s present in her last few years’ worth of work. Given that it’s a mask of a smooth, pale and featureless face (albeit with some enviable cheekbones), with simple holes for eyes and mouth, I could use the word ‘uncanny’ (the way ‘uncanny’ relates to the uncanny valley of humanoid robots, sex dolls, and digital animation) — but for those of my generation, the closer correlation is the mask worn by the character Michael Myers in the Halloween franchise. Blankness in a human is frightening. Anonymity in a person is menacing. One, because we can’t read any signals off of a blank — no face and no real connection to the eyes means we have no idea what’s coming next — and two, it stokes our own fears of eradication. Torturers have used lockable masks and hoods on victims for centuries. It’s a form of erasure. 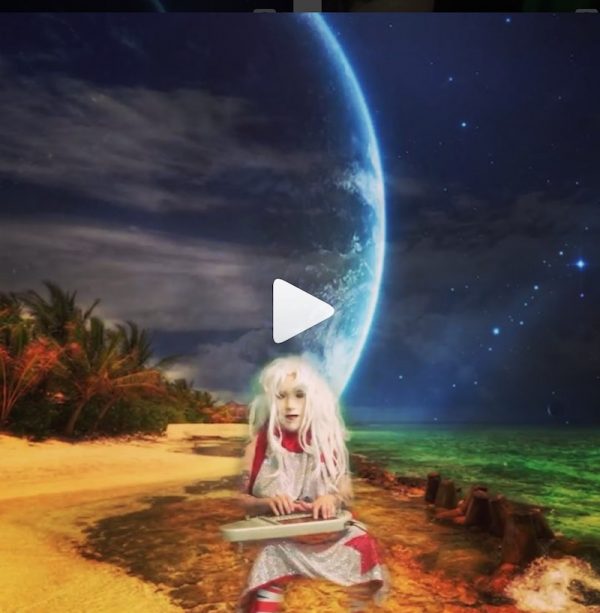 “Erasure” is an interesting state for an artist to aspire to. Blizard uses cheap, easy, near-sleazy props and modifiers in her work, both in person and in the video dispatches: a muppet sidekick, archaic video effects, rickety drum machines, neon, an over-sparkly car. In a post-Burning Man Instagram entry, Blizard superimposes herself onto a totally artificial new-age/space-age backdrop as she clutches a lap instrument and sways slightly to the patter of thin beats. It’s sleepless and hypnotic, and reminds me of late-night internet surfing circa 2008, when a new generation was learning to fuck with everyone older (and play with one another) by shaping a short-hand irony online. This month, Blizard posted a video of her masked character sitting in a car in an empty parking lot in broad daylight, doors ajar, while she blisses out to the seduction of a electronic tune that sounds like scratchy old telephone dial tones and busy signals. The sense that this is the bad-dream apotheosis of American Youth — that with enough screen time, drugs, and ADHD, everyone is headed toward disengaged oblivion — is sort of the point. 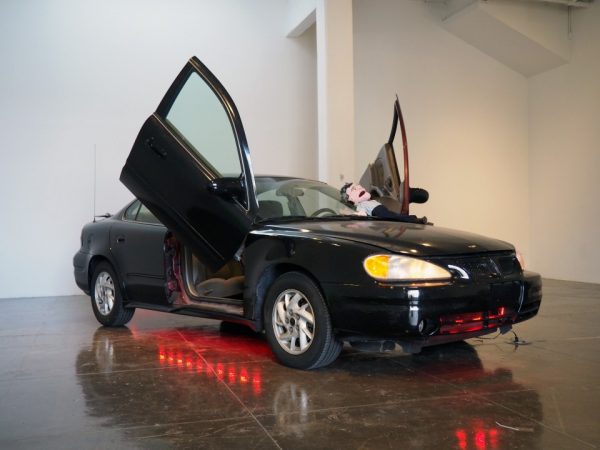 Blizard seems unblinking (natch) when it comes to steering her ship right into Huxley’s sea of Soma, and broadcasting the hermetically sealed state achieved by anyone who decides to check out of reality and into a state of reverie (why not?) or stupor (more common). Blizard’s character is very often hashtagged in IG with #scarlettjohansson, or #ellefanning. What’s the value of pop culture, of the escape it offers us, if we disappear into it entirely? If the individual “transcends,” in public, without taking anyone along for the ride, who benefits? How useful is this bell jar in this moment?

I’ve felt for a while, and certainly since Blizard’s solo show at Artpace last summer, titled We invent nothing, that Blizard is warning us. She invents new images and characters to show us that not only is nothing really new, but that we’re not paying attention to anything but our own pleasure. And this is the shortest route to not only personal oblivion, but to the extinguishing of everything. What’s remarkable is that Blizard presents this idea without criticism. Maybe warning without judgement is best achieved from behind a mask.

Christie keeps her motivational cards close in. In a good way. At least it seems so to me, but I feel your last paragraph really gets to the heart of it.