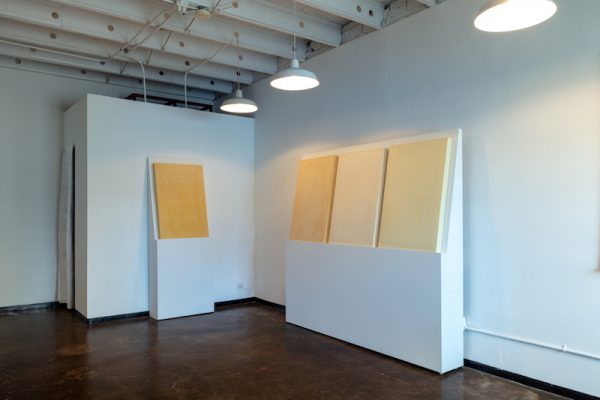 In addition to his career dedicated to educating the public about other artists as an independent curator, and Director of Educational Programming at the Rachofsky Warehouse in Dallas, Thomas Feulmer maintains a consistent studio practice. In his own work, he’s explored the dynamics of human relationships and the construction of identity and self through the arrangement and alteration of found texts, appropriated imagery, and readymades. He attends with equal respect and attention to the signifiers of a broad spectrum of cultural spaces, including, but not limited to: Art history, workout culture, children’s posters of clowns, classical sculpture, and ancient Greek graffiti. As such, Feulmer is indebted first to the legacy of Pop Art, whose practitioners have done the most work to erode the boundaries between high culture and popular culture. Feulmer’s show Yellow Tablets, on view at the Reading Room in Dallas through October 27, brings together the cultural impact of Star Wars, the earliest forms of writing in history, and the role of museums in defining value systems. 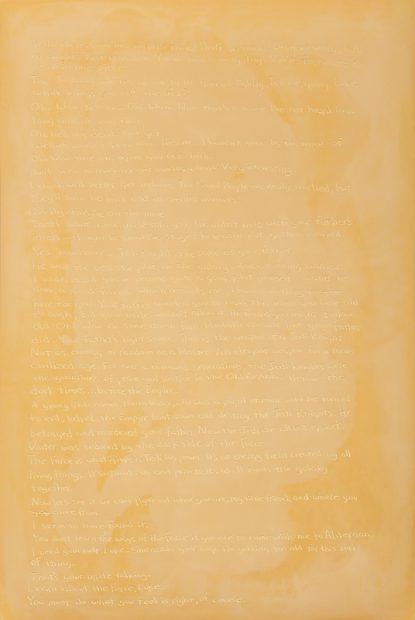 In 2002, a few years after completing his MFA at Carnegie Mellon, Feulmer re-watched the original Star Wars trilogy, and transcribed with rapt attention all of Obi-Wan Kenobi’s lines. At the time, he didn’t know what to do with the text, but he held on to the yellow legal pad he’d used until he could figure it out. The resultant work, Yellow Tablets, render these pages into sculptural objects with Obi-Wan Kenobi’s words inscribed into cast, dyed plaster tablets three feet tall by two feet wide (scaled up and roughly the same relative proportions as a piece of notebook paper). Up close, a viewer can read Obi-Wan Kenobi’s words tidily inscribed in an unremarkable, natural hand, but at certain angles the text disappears and the tablets become radiant, nearly monochromatic surfaces, suggesting the type of butter sculptures Donald Judd might carve for the State Fair. Displayed on large white pedestals which are evocative of museum displays of ancient stone tablets, Feulmer’s six yellow tablets take on an aura of both religious and secular sacredness.

This is certainly in the artist’s mind. Feulmer explained to me that for him, and for most kids of his and future generations, Obi-Wan Kenobi “was one of (if not THE) iconic mentor figure, a male figure who led a character (Luke) from boyhood to manhood, and helped him find his purpose.” He continued to explain that he envisioned that he could create a permanent set of “lessons for a number of ways to think about boyhood/manhood, and how one guides or is guided,” by extracting Kenobi’s lines from the ephemeral space of the film, and inscribing them into tablets. Inscribed tablets trace back to around 3000 BCE when the ancient Sumerians began to keep more complex records of trade. They eventually amassed enormous libraries of stone and clay tablets describing their laws, business transactions and stories. An encounter with a cuneiform tablet in a museum is, for most people, fairly unremarkable. The script bears no resemblance to alphabetic scripts contemporary people are familiar with, so the content is completely lost on them. Clay cuneiform tablets are the epitome of esoteric. However, their importance to history and to understanding the development of human civilization, language, morality, and literature, cannot be understated. Feulmer quite explicitly places the script from Star Wars into that context, and in doing so, makes a point of elevating the films to that level of cultural significance — not within the larger context of human history, but certainly within the way he constructs his own personal history.

By putting one of the most extreme examples of consumer-driven mass culture into dialogue with the idea of ancient stone tablets, which are placed in museums to indicate their importance to our understanding of humanity, Feulmer is indicating that these films could have a similar effect on the course of history. And one can argue that it has. He’s also speaking more broadly about the lack of distinctions between high art and popular culture, and critiquing institutions that make too much of those distinctions. I should say that I know next to nothing about Star Wars. While I understand the extent of cultural impact of these films, for the uninitiated like myself, something gets lost in translation. The text inscribed on the tablets is usually half of a conversation, sometimes presenting moral lessons, sometimes responding to plot points. The movie itself is not esoteric, but to an non-Star Wars fan the plot specificities are, and the presentation enhances that barrier to entry.

For me, it raises a lot of questions about how an element of mass culture, that has been analyzed and celebrated to the tune of half a billion Google hits, operates in the context of contemporary art, and that’s an interesting conversation in its own right.

On view at the Reading Room, Dallas, by appointment through October 27.

Allison, thank you for this insightful article on the beautiful and compelling show of Thomas Fuelmer. Loved the reference to Donald Judd and a butter sculpture at the State Fair. The work is important as you articulate. It also is luscious. Thank you for your excellent review!