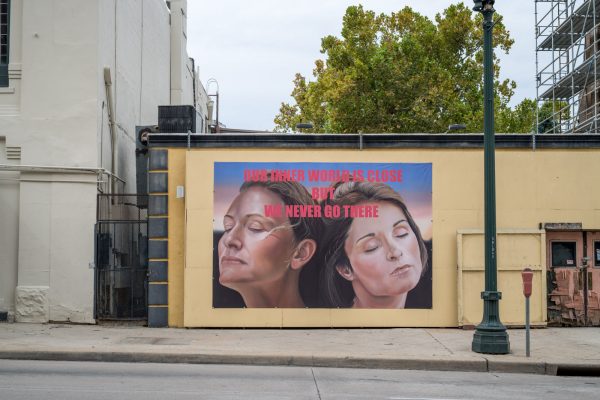 Public works like Kelli Vance’s 2017 inkjet on vinyl piece ‘Our Inner World Is Close But We Never Go There’ are made possible through Houston’s hotel occupancy tax. The piece is installed in Downtown Houston on a building owned by Jim Petersen. Photo by Peter Molick Photography/via McClain Gallery.

A newly released study by January Advisors, a Houston-based data science consulting firm, has found that Houston arts organizations are missing out on hotel occupancy tax (HOT) money, as these funds are not automatically billed when renters reserve rooms through AirBnB in Houston. While the 17% HOT tax is applied to all hotels in the city, and AirBnB hosts are supposed to registered as a hotel or short term rental with the city and the county, Houston First (a government organization that operates Houston’s performing arts and convention spaces and manages the HOT tax) says that only 174 AirBnB hosts in the city have identified themselves as a such. This data conflicts with the more than 3,000 listings active on AirBnB in the Houston area. Though it is possible that more AirBnB hosts may be registered — Houston First’s HOT online registration form doesn’t ask users to specifically denote that they run an AirBnB — it is unknown if this is the case.

HOT taxes exist as a way to help cities secure funding for programs without charging constituents; since they are mostly paid by tourists, the taxes are generally easier to pass. This does mean, however, that traveling to cities with robust HOT tax policies makes trips more expensive, a fact that is widely covered, with Houston often cited as a leading example.

Not all 17% of the HOT tax goes to the city. The breakdown of the money is as follows: 6% to the State of Texas; 2% to Harris County; 2% to the Harris County Sports Authority; and 7% to the City of Houston and its partners.

In the last two years, AirBnB has started collecting a portion of the HOT tax in Houston (and all across the state) though an agreement the company has with Texas. In June of 2018, the company announced that in the first year of this program, it delivered “over $15.3 million in home sharing and short-term rental tax revenue on behalf of its Texas hosts.” AirBnB’s agreement with the state of Texas, however, only covers the 6% of the tax that goes to the state, meaning that it is up to individual hosts in Houston to collect the remaining 11% of the city’s tax. Via AirBnB’s website:

“As an Airbnb host, if you determine that you need to collect occupancy tax, you can collect Occupancy Taxes by asking your guests to pay it in person or through the Resolution Center after they check in. In each case, it’s important that guests are informed of the exact tax amount prior to booking. If you choose to collect Occupancy Taxes in person, please note that it should be collected only upon arrival and that we’re unable to assist with collection.”

According to this, hosts either have to confront their visitor and collect the HOT tax money in person, or they have to follow up with their guest and charge them the tax money post-stay, all while communicating that this is something they’re allowed (and legally obligated) to collect.

A portion of this HOT tax money earmarked for the arts is distributed between the Mayor’s Office of Cultural Affairs & Houston Civic Events and the four groups that contract with the city to apportion the funds to the arts community, including: the Houston Arts Alliance (HAA) and the City’s Initiative Program through HAA, the Houston Museum District Association, the Miller Theatre Advisory Board, and the Theater District Improvement. This pool of money is equivalent to a 1.35% tax, meaning that for every $100 spent in Houston hotels, the arts receives $1.35. (For more clarification on this breakdown, go here.)

January Advisors found that over a year period, from September of 2017 to August of 2018, the arts in Houston missed out on $365,231 of uncollected HOT revenue from AirBnB hosts. Of this money, $332,766 would have gone to the four contract groups listed above, and $32,465 would have gone to the Mayor’s Office. Though it’s possible that some of these funds could have been paid to the city by individual hosts, it is unknown how many funds were received from AirBnB proprietors.

To reach this conclusion, January Advisors contacted the Texas Comptroller with an open records request asking for data on the 6% HOT tax that AirBnB automatically collects for the state of Texas. Then, per January Advisors:

“…we used total taxable room receipts as a baseline. These are the gross receipts declared by AirBnB and paid on behalf of hosts within the boundaries of the City of Houston.

AirBnB has worked with other cities to address this issue. In Amsterdam, Portland, and San Francisco, the company has agreements with the cities so it can collect (and pay) city occupancy taxes as part of its service.

When asked about whether AirBnB plans to collect additional hotel occupancy taxes in Houston as a part of its service, Laura Spanjian, the company’s Texas policy director, commented:

“We have been engaged in productive conversations regarding a potential tax agreement with the city and are ready to move forward with the city’s approval.”

This solution could be a win-win for Houston and for AirBnB and its hosts: the city would start receiving its funds, and AirBnB would have worked successfully with another local government to make sure the money is being collected. Additionally, having a HOT tax built into the line-item bill on its rental agreement would ease the burden on both the company’s hosts and its customers. AirBnB and the city of Houston may reach an agreement soon, as negotiations have been in the works since April 2017, as reported by the Houston Chronicle.

When contacted for comment on the status of these talks, Jonathan Newport, Houston First’s Vice President of Public Policy, replied, in part:

“Though an agreement doesn’t exist yet, we’re hopeful progress will be made in the near future.”

Those interested in voicing their concerns over this matter can contact the city of Houston, Houston First, and AirBnB.

Judd’s Manhattan Home Opens to the Public (This...