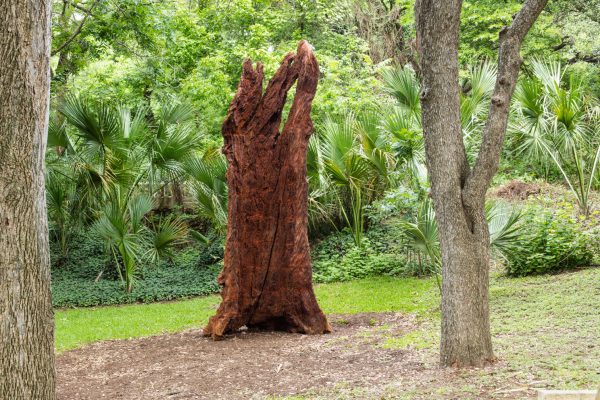 Recently, Texas institutions have been chockablock with new art acquisitions. In just the past two months, the Museum of Fine Arts, Houston announced acquisitions of major pieces of Medieval art; the Dallas Museum of Art publicized their collection of works by local artists, including a suite of eight paintings by Ludwig Schwarz; the Nasher Sculpture Center reported the acquisition of 2D, sculptural, and immersive works by Ann Veronica Janssens, Joshua Neustein, Bosco Sodi, Louise Bourgeois, and the Guerrilla Girls; the University of Houston-Victoria unveiled a new installation by Austin-based artist Margo Sawyer; and the Kimbell Art Museum picked up Landscape at Le Cannet, an important painting by Pierre Bonnard.

Now The Contemporary Austin has announced its own acquisition, of a tree trunk sculpture by Ai Weiwei. The piece, which is made of iron, has been on view in the Betty and Edward Marcus Sculpture Park at Laguna Gloria since 2017. More than 70 donors and foundations made the purchase possible.

Iron Tree Trunk sits among other trees in the pathways of Laguna Gloria, essentially blending into its surroundings. Ai cast this piece from the remains of a single large tree, so unlike some of his other tree works, which can be described as Frankenstein-like assemblages, this piece is more monolithic and naturalistic.

Louis Grachos, the museum’s director, commented on the acquisition:

“Ai Weiwei is among the most important artists working in the world today. I am touched and so impressed by the outpouring of support for this purchase. Austinite’s clearly understand just how significant a work like this is for the enjoyment, education, and inspiration of the tens of thousands of adults and children who visit Laguna Gloria from the region, for the cultural tourists who come to Austin from around the world, and for future generations who will develop lifelong relationships and lasting memories with this moving and poetic sculpture.”

The installation of Ai Wei Wei’s Forever Bicycles, a piece situated on the Waller Delta in downtown Austin, has also been extended through June 2019. To read more about that piece, check out Ayden LeRoux’s article Ai Weiwei, Austin, and Instagrammable Art.