Props, Assists and Situations: Jessica Stockholder at The Contemporary Austin 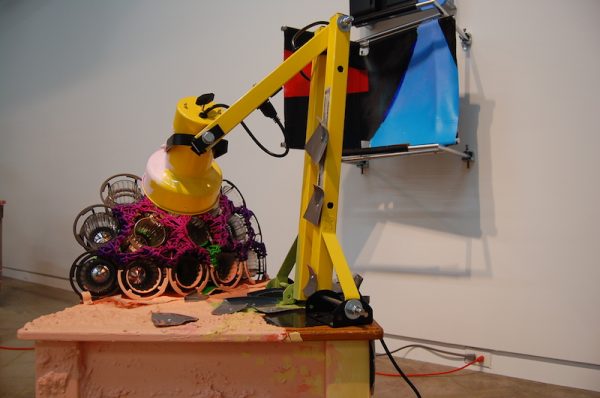 The promotional photographs for Relational Aesthetics, Jessica Stockholder’s show at The Contemporary Austin at the Jones Center, share some compelling features with the works themselves — they confuse the eye. It’s no accident.

“I don’t think in volume,” Stockholder says, “I think graphically.” The sculptures themselves are described not as installations, but as three-dimensional paintings, or in some cases, “situations.” Stockholder’s propensity for working from a graphic, two-dimensional idea creates an interesting life cycle to the work, which transitions repeatedly from two-dimensional thought experiment to a three-dimensional model from which a full-scale work is rendered, and then to documentation photographs. In most instances this last phase might feel like convention, or bureaucratic necessity, but with these works, one wonders if the resulting images are actually nearer the artist’s original impulse than the structures themselves. Or perhaps it’s just another iteration of a persistent theme in Stockholder’s work — every element’s success is dependent on another element. 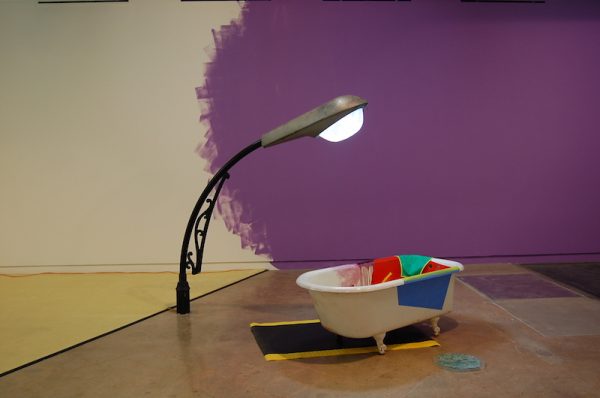 Installation view: Jessica Stockholder at The Contemporary Austin at the Jones Center

Stockholder routinely manipulates a viewer’s perception of space though materiality and composition, and refers to many of her works in Relational Aesthetics as “assists.” These forms range from bundles of sticks to unwieldy sheets of metal that appear to be waving in the wind, or heavy-gauge metal screens supporting miniature works of art by other artists. Each of these assists are in turn supported by a prop, which is strange reversal of expectation — or is it function, or is it semantics? 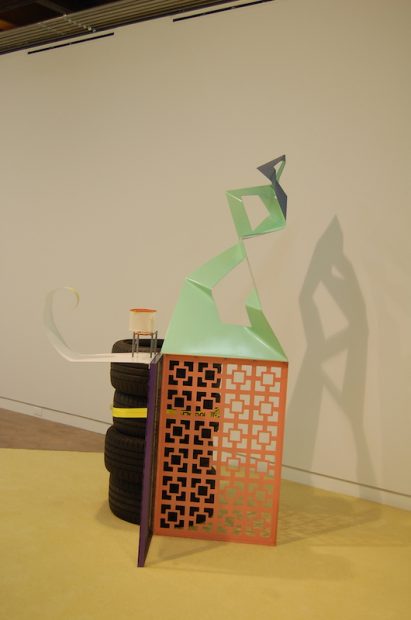 The assists bear tags that inform the viewer: “Take note, this structure will not stand on its own.” This idea — that nothing (neither the objects themselves, nor the artist who made them, nor the viewer who puzzles over them) is an island — permeates the show. Even the viewer, or a potential buyer, is confronted with the idea that the prop, as large and imposing as a refrigerator or a motorized scooter (and it may dominate one’s view of the work), is not in fact a part of the art. Should someone buy one of these works, Stockholder explains, the prop would not be included in the sale, and they would have to find some other way of supporting it. She acknowledges that this may be a difficult idea for some, but responds that, “If you buy a painting, they don’t sell you the wall to hang it on.” 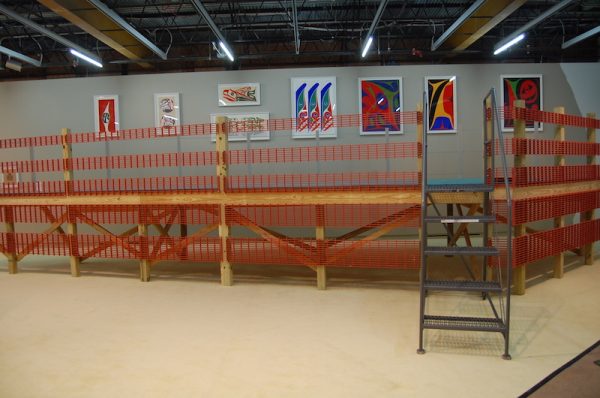 This idea — that everything is dependent on people and experiences outside of itself (or one’s self) — is Stockholder’s leading impulse behind her inclusion of the work of others in what is, technically, her solo show. A large portion of the gallery is given over to work by Robert Davidson, a curated collection called U and Eye, which is viewable from a raised platform. Even in this title, there’s another nod to the idea of art as a shared experience. Stockholder identifies the art work of native peoples of Canada — where she is from — as influential in her own trajectory as an artist, and she seems to derive genuine pleasure from sharing the work of others and finding new ways of presenting it.

At the same time, the viewer must grapple with context, and context, in this show especially, is itself a work of art. It’s difficult not to consider that a whole collection of curated pieces by another artist becomes, through Stockholder’s process, a single work of art by Stockholder. Though Stockholder concedes this is a possible interpretation, she counters that this choice in the show is not about questioning authorship. “We all have agency, I’m not disputing that fact. But we don’t all exist alone.” 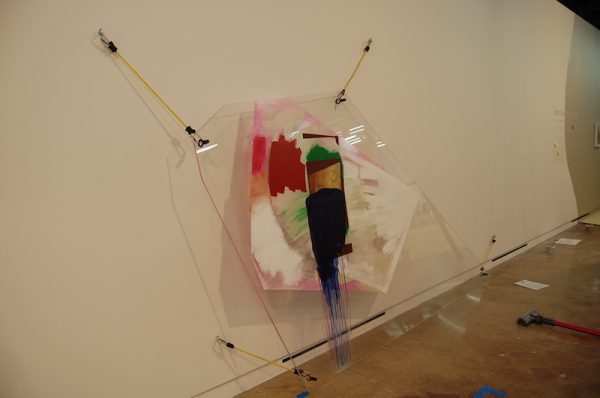 This insistence on the importance of others, and a persistent compulsion to look out or through or beyond both oneself and even the work itself, shows up again and again in Relational Aesthetics. From the basic premise of this show — that things exist only in relationship to other things, to her use of assists and props, the material choice of mesh (to see through the work), or the use of platforms to view the work — always returns the viewer to this initial impulse: To look out there.

In growing this idea, Stockholder is planning a new sculptural piece for The Contemporary’s Laguna Gloria location in Austin that will be primarily a platform. The work, titled Save on select landscape & outdoor lighting: Song to mind uncouples, should be on view by the end of the year. “I love the platform,” Stockholder says, “It acknowledges the viewer the way a piece of furniture does.” And it’s true that a platform, like a couch, is a sort of invitation to participate in a “situation” as Stockholder calls it. One does not observe a situation; one finds oneself in a situation, and in this way the art leans not only on its prop to be fully realized, but also on the viewer. 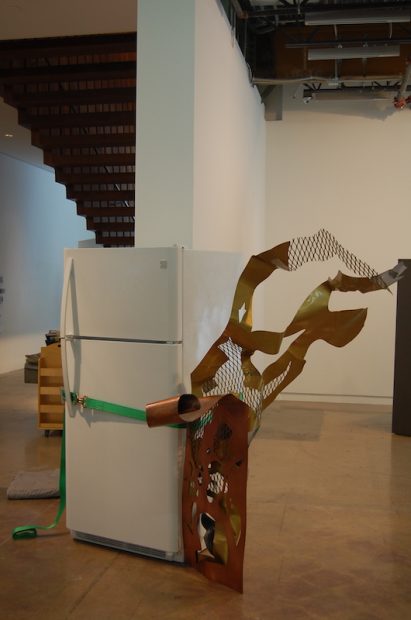 Strange associations come to mind while moving through the gallery. In Assist: Hinge Arrested, one of the pieces constructed deliberately for this show, sheets of metal that have been fabricated to look as though they are moving through space by their own volition are held up by a full refrigerator. In looking at the waves of metal the phrase, “assisted living” keeps coming to mind, interrupting more coherent thoughts. Around the corner, mounted on a wall, is a small plexiglass case holding a model demonstrating how to install this work. Miniature waves of brass and copper are lashed to a blue bear eraser. And because it is so small — it could fit in the palm of your hand — this one piece feels uncharacteristically dear. It feels like a window into something, a kind of key to the artist’s initial desire, or her sense of both whimsy and acceptance about how that initial desire comes to fruition. And it shows a point at which the artist depends on others not for inspiration, but for execution. 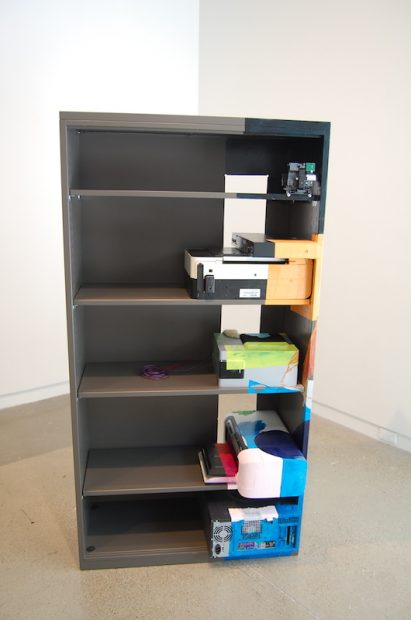 So there’s perhaps more to the phrase “assisted living,” in this context. The pieces inhabit the gallery space as residents might. And the space, too, is put to work, as an art work. And it is perhaps this realization, which emerges with greater intensity as one moves through the gallery and across the strange yellow carpet that bisects the room, that makes it increasingly difficult to look at a single piece without seeing the way it reflects or casts a shadow on a nearby wall, or how it relates to another sculpture in the background.

While contemplating Poles Apart, a painted stack of electronics that loosely references a totem pole, a lyric by William Onyeabor comes to mind: “Since I came to know you baibe, I’ve been telling you how sweet you’re, I’ve been telling you how good you’re. Now I want you to tell me how I look.” The lines, like the sculptures, shamelessly acknowledge that the way we are perceived, and the way we perceive ourselves, depends on the feedback loop we establish with the object we focus on. Depends, again, on the context, again, on what they are in relation to, again, on what came before.

Through March 3, 2019 at the Contemporary Austin at the Jones Center, Austin

Your Super Tuesday Quote About Texas From Devo’s...

https://www.indiegogo.com/projects/peak-shift-smh-2018#/
She’s awesome, and also at the Silos in Houston