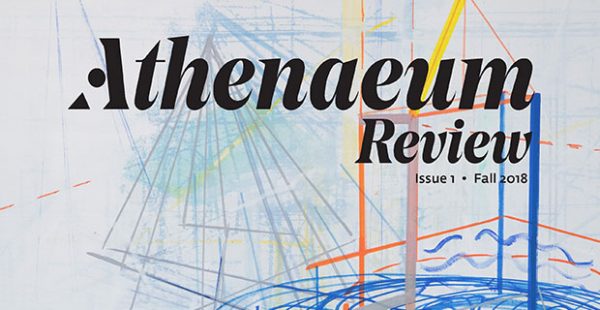 Today, September 28, 2018 at 5PM, at UT Dallas’ SP/N Gallery at Synergy Park North 2, the Athenaeum Review, a newly launched publication of UT Dallas’ School of Arts and Humanities and Edith O’Donnell Institute of Art History (EODIAH), will have a reception and panel discussion with Rick Brettell, Charissa Terranova, Paul Galvez, Ming Dong Gu and Dennis Kratz addressing the present public venues for criticism in the arts and humanities.

According to the publications’s mission:

“Athenaeum Review is to help make interesting and important ideas in the humanities freely available to the general educated public, and to promote thoughtful, in-depth criticism of the arts in the Dallas-Fort Worth area. Our first issue includes an introduction to the Athenaeum and an essay on the Wilcox Space, both by Rick Brettell, as well as reviews of First Sculpture at the Nasher by Paul Galvez, and of two books on bioaesthetics by Charissa Terranova. Among much else, there are also essays on Frankenstein at 200, democracy promotion, culinary history, David Hume and Adam Smith, African performance, and science fiction, as well as lists of the best books on British Romanticism, Athenian democracy and Joseph Conrad.”

Jennifer Smart interviewed editor Benjamin Lima earlier this week for Glasstire, about the eclectic and diverse nature of subjects covered in the Athenaeum Review:

“Another distinctive aspect of our approach reflects the interdisciplinary research centers whose directors sit on our editorial board: so we expect to have particular emphases on, e.g. China, Latin America, Holocaust studies, translation studies, art history and science, and values in the STEM fields, for example.”

In addition to its interdisciplinary focus, the Athenaeum Review will seek to provide serious and in-depth arts coverage in the Dallas/Fort Worth area. Lima states his rationale for this as:

“Not to be too simplistic about it, but I hope that worldwide readers who are passionate about arts and ideas will enjoy discovering the material that we share from D/FW as much as they would from, say, Reyjkavik or Taipei or anywhere else.”

Tonight’s event is free and you can RSVP here.

The full website for Athenaeum Review with calendar listings, links to podcasts, and expanded content is here.

What the JFK Assassination Tells Us About Dallas...

A Chat With Benjamin Lima About the Launch...