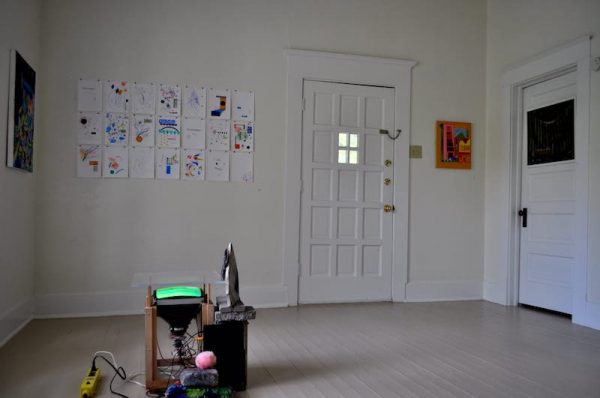 Cultural institutions and art galleries in Dallas, as in most cities, tend to cluster together in particular neighborhoods, moving in accordance with a fluctuating real-estate market and dominant trends in the industry. Today, as anyone reading this site is probably aware, there’s the downtown Arts District in Dallas with the city’s largest cultural institutions concentrated within a few blocks; the Design District, which began to attract commercial galleries (as well as  the Dallas Contemporary) a number of years ago; the rapidly changing Trinity Groves neighborhood; a few stalwart galleries in Deep Ellum; vibrant communities in Oak Cliff, Denton, and many more small pockets around the city.

Inner Space: A Chamber Gallery isn’t near any of them. Situated in an early 20th- century home in a residential neighborhood near Love Field Airport, Inner Space proves that geographic proximity isn’t a necessity for building a strong vision or community. The founders, Robert Long and Aryna Petrashenko, moved to Dallas in early 2018, and within a matter of months they established their gallery as a space for deep engagement with art and ideas, and they’re helping to build a community that’s interested in the same thing. With Inner Space, Long and Petrashenko translate the intimate, social experience of hearing chamber music into a model for the presentation of visual art.

A visitor’s experience at Inner Space, in other words, should not be one of passive absorption, but one of response and critical dialogue. This is by no means a new concept — Long and Petrashenko cite early 20th-century Moscow avant-garde exhibition societies, Jack of Diamonds and Donkey’s Tail, as predecessors — but one that seems absolutely necessary for any city’s artist community to thrive.

It’s not a new concept to Dallas either. To the best of my knowledge, the most recent saturation of artist-run spaces in the DFW area peaked sometime between 2012 and 2015. During that time: S.C.A.B. member-artists all had robust exhibition programs, Arthur Peña had his own space, Francisco Moreno and Kevin Jacobs were running the Fort Worth Drawing Center and Oliver Francis Gallery respectively, the Apophenia Underground was confusing critics, the (wo)manorial art collective was making a point of showing cyberfeminist work on an online platform (and IRL too), and the much beloved Beefhaus threw curveballs at the commercial establishment and artist-run models alike. Unfortunately, for a variety of reasons — most prominently that some of the associated artists (excluding Moreno and Peña) have moved elsewhere to pursue their careers, and difficulties with the city’s Fire Marshal office — all of those space have closed. Others, like Karen Weiner’s The Reading Room, continue to present artwork in a non-commercial setting and foster an engaged, dedicated community.  Still, the sense of urgency that spawned all that activity has waned somewhat in recent years, but Petrashenko and Long’s Inner Space feels like a beacon of new energy.

As an artist, Long has something of a personal investment in the evolution of the Dallas art community. He grew up in the area, in what he refers to as, “the suburbs of the suburbs.” He met Petrashenko, who was raised in post-Soviet Ukraine, in a community college drawing class in Missouri. Long would stay in Missouri until 2014, earning a BFA at the Kansas City Art Institute and pursuing graduate studies at Washington University of St. Louis. Petrashenko earned a BFA in Costume Design from Webster University and an MFA in the same at the University of Maryland. In 2014, the couple moved to the Bushwick neighborhood of Brooklyn.

In New York and the DC area, the two immersed themselves in the cities’ respective arts communities, and found the culture most vibrant when artists took the presentation of work into their own hands, hosting events in their homes and studios. When they relocated to Jersey City, just across the Hudson River, in December 2016, the increased square footage in their apartment served as a catalyst to found Inner Space, where they hosted four exhibitions before Long’s job moved them back to his hometown of Dallas. Without hesitation, they relaunched the gallery in a new location with the same objective, “to provide a space where artists can exhibit their works and engage with peers within the artists’ community, as well as with patrons who wouldn’t have access to their work at this point of their emerging careers.” 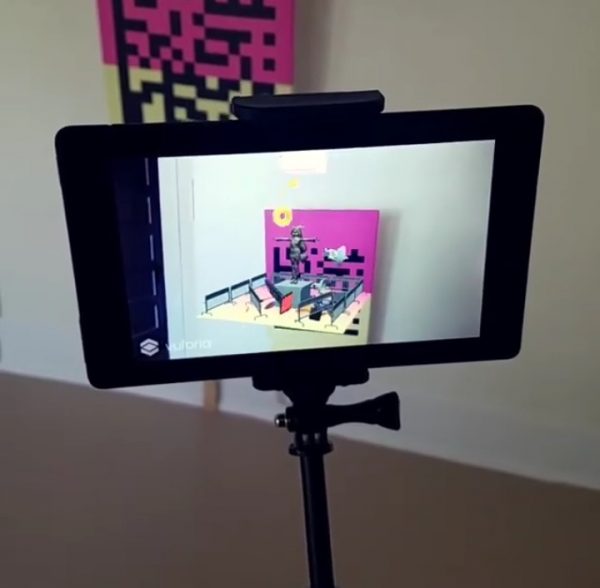 So far, their endeavors in Dallas have, by their estimation, proved successful. They recall a broad and challenging discussion about fraternity culture, sexual assault, gender identity, and gender performance, that resulted in response to SMU MFA student Jessamyn Plotts’s Inner Space exhibition A New Woman this summer. The two current exhibitions at the gallery, From Falsehood’s Glitter, which features work by Dallas-based artist and curator Gina Orlando and Los Angeles-based artist Brandon Barr, and a survey of international video work from 19 artists, aptly titled Video, both make use of digital technologies directly, and mine the landscape of the internet directly for inspiration. 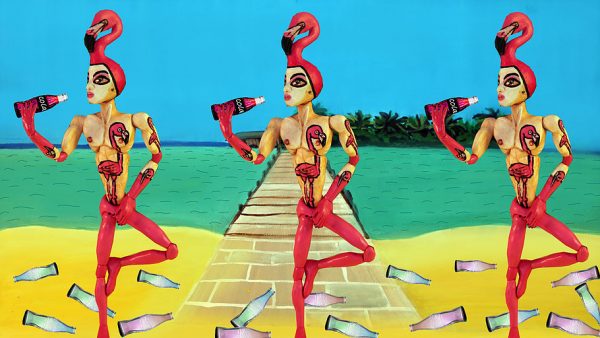 The video show, which was curated through an open call placed on various online platforms, demonstrates how effectively the internet can build an interconnected, global community of artists. For a small gallery that operates as a “no-profit” space, video is one of the most cost-effective, efficient ways to show international artwork. The video survey, not constrained by any thematic or aesthetic similarities, is refreshingly eclectic. Highlights include two frenetic ruminations on nature, culture, identity, and displacement from Argentinian-German artist Leyla Rodriguez; a psychedelic nightmare set in an ecologically-ravaged dystopia animated by puppets dressed like Berlin club kids (with a soundtrack to match) from Russian artist Olga Guse, who works in Dresden; and a pulsing poem by another SMU MFA student, Xxavier Edward Carter. Unfortunately, due to the set-up of the house, and the crowd at the opening, it was difficult to hear many of the more narrative videos, but there are links to most of them on the gallery’s website, and Inner Space is open by appointment for subsequent viewings. 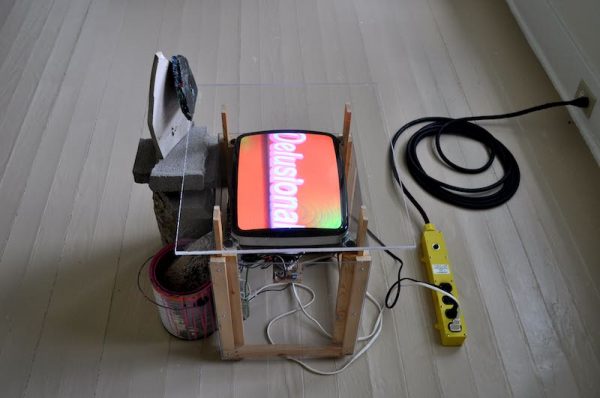 I wish that I had made a more concerted effort to return to see From Falsehood’s Glitter and discuss it in more depth. The exhibition is based on the premise that both Barr and Orlando make work at an intersection between digital technology and traditional media, and as such, they make the viewer consider the points at which the digital and the real converge, questioning notions of truth. Barr makes more explicit use of digital technologies; most of his paintings in the exhibition require a digital apparatus — a tablet with augmented reality capabilities, or a digital camera with a flash — to be experienced in full. Orlando appropriates visual material from the internet in order to reflect on the experience and results of our limitless access to information and visual stimulus. I was only able to recognize a concrete connection between her digital source material and the resultant work in a video-based sculpture titled Relation Between Problem Solving and The Pace a Cactus Can Grow, as most of the two-dimensional work on display at Inner Space reduces that overload of imagery down to vibrantly colored, geometric abstractions.

¯\_(ツ)_/¯. I may be missing something, and frankly, I feel ill-equipped to talk about some of these works. I tend to subscribe to a belief defined with striking clarity in an article on Vilém Flusser by writer, editor, UbuWeb founder, and radio provocateur Kenneth Goldsmith called, “It’s a Mistake to Mistake Content for Content.” His thesis is essentially that cultural artifacts produced through a technological apparatus say more about the capacities and economic concerns about the technology used to create the work than what the artist intended in the first place. When an artist uses a new technology to make their work, it often seems to me that they’re reinforcing the dominance of these technologies rather than questioning how they’re affecting our perception and experience of the world. By using an augmented-reality technology to make an artwork that just uses augmented-reality technology, can you really do anything other than demonstrate the capacities of the program? How can an artist expose an apparatus’s limits in a way that doesn’t simply invite the company that produces it to make new, “better” technologies to serve their needs? I don’t think it’s enough to just showcase a technology or use its content as source material without attempting to deconstruct the forces at play in its creation. How can artists address the internet and digital technology’s capacity to create false information? How can artists work with —and better yet — against that? How can artist ‘break’ the internet?

I don’t even know if these are the right questions to ask. Inner Space’s program not only presents work that provokes difficult questions, but offers artists and audiences an opportunity to learn from each other and have real, IRL conversations about where art is going. In Long’s words: “What we seek to achieve is what happens on porches and in kitchens at the end of the night when the few remain and jabber on, endlessly interrupting. A conversation, be it about aesthetics, politics, or the moment at hand, to spark that question and debate it until tomorrow comes anew.”

The discussion continues on Sunday, September 30, at the closing reception for both exhibitions, from 2 – 5pm. In November, Inner Space presents a solo exhibition of work by University of Texas at Arlington professor, Andrew Ortiz, addressing the physiological and psychological effects of epilepsy. That exhibition opens Saturday, November 3, from 4-7 pm.