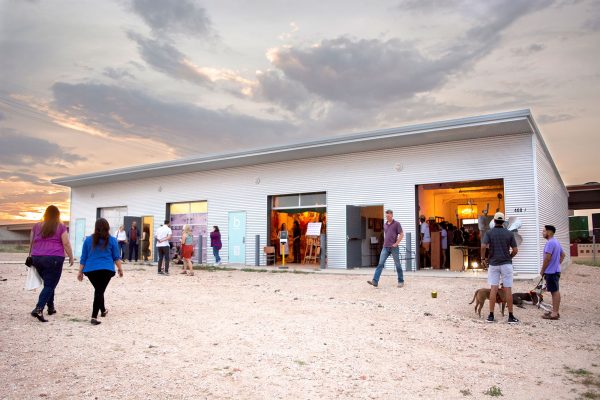 The Charles Adams Studio Project (CASP) announced today that it has a green light to build four new studio spaces on its campus. The Lubbock-based non-profit, which was founded by its namesake and has been active in the city since 2009, is an organization dedicated to helping artists by providing them with workshops, affordable studio spaces, lectures, and other career-building resources.

So far, CASP has constructed four studio spaces on a lot adjacent to the Louise Hopkins Underwood Center for the Arts, another Lubbock nonprofit dedicated to producing exhibitions. All of the studios — the four currently operating and the four CASP will soon build, are each 800 square feet (20′ x 40′) and cost $400 a month, plus electricity. Three of the current studios are rented out to local artists, while one of the spaces is leased by the Texas Tech School of Art for use by its faculty.

CASP studio renters, along with artists who are a part of the organization’s residency program,  are regular participants in the city’s First Friday Art Trails, a monthly event in which thousands of Lubbockians go see some art. Perhaps more crucially, the CASP studios are right in the thick of the art trail, meaning more foot traffic for renting artists.

“When you create an artist community, artists collaborate with each other and they interact with the public. CASP is working towards making Lubbock not only the Hub City, but an Arts Hub as well.”

The four recently announced studios will be completed in 2019. The funding for the building comes from various foundations and donors, including: The CH Foundation, the Helen Jones Foundation, Western Bank, American National Bank, and members of the Lubbock community. CASP is currently raising money to build its twelve additional studios. For more information on that, go here.