Why We Need Art Writers Now (More Than Ever) 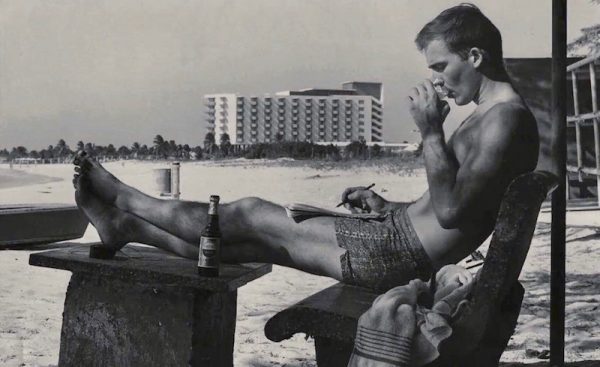 Hunter S. Thompson, having an opinion and a beer

The first piece of published writing I was paid for was for a set of capsule reviews of television shows. It was the mid-1990s, for a print newspaper here in Texas. I wrote movie and music reviews, freelance, after that. This was a dream come true for me, to be paid for critical writing. The first time I was paid to write about visual art was less than a year later, for another print publication. I was so green that when I interviewed a prominent Dallas art dealer about the work in her gallery, she had to firmly correct me when I referred to her program as “Modern” art. “You mean contemporary,” she sniffed. I was in my 20s, and I was really embarrassed about that.

Glasstire is launching an art writing prize this year, aimed at writers who are enrolled in universities and colleges in my own region, which is North Texas. Back in the ‘90s, every major daily newspaper in Texas, and almost every major alt-weekly, had a full-time art critic. I was one of them in the late ‘90s, for two different Texas publications at different times. What an era for criticism! Where I worked, we had food critics, movie critics, music critics, book critics. As far as I know, in Texas there are now only two full-time salaried art critics, and we’re both at Glasstire, and I’m one of them. Yet here in Texas there are more art venues, art-school programs, and artists than ever before. And a dire lack of honest, engaging, readable critical writing about any of it.

The Glasstire Art Writing Prize won’t fix this imbalance — no one publication can (not even the oldest online art magazine in the country, and the most comprehensive visual art resource in the state: Glasstire is both) — but it can encourage and cultivate the voices who are interested in engaging with the vast amount of visual art that this state churns out. Artists not only deserve honest critical writing about their work. They want it. The best artists, especially, want it. And the glossy lifestyle magazines and ‘curated’ Insta-sites that only embrace the forced glamor and fluff around visual art aren’t giving them (or art fans) this, or starting any meaningful conversation around art and what it can actually do in our culture. Given our current political moment, this problem of lack of real dialogue is especially galling.

I want to encourage you, to challenge you — the university student who likes art, goes to openings, goes to museums, goes to artist talks — to lend your voice to the public conversation about art. And get paid to do it. All you have to do to get our attention is to write one essay on a piece of art that you love, and then tell us why you love it. If you can communicate how much that work blows you away, you will blow us away.

Glasstire not only pays our contributors, but if you look at art and think about art, we want your opinions, your original impressions and insights. This is key: art has a point of view, and in order to honor that, the responses to the work should have one, too. The art work shown throughout Texas, whether homegrown or imported, demands it. We are awash in art (modern, contemporary, every kind of art), and our state is much more open, and richer and more complex for it. Being surrounded by art is both a luxury and, on a human level, deeply necessary and sustaining. Writing about art in a way that’s compelling (in a sustained way) isn’t easy, per se, not if you want people to stick with you for a whole article, but an honest and meaty review of a current art exhibition is the most rewarding, and — dare I say necessary? — way to enter into the dialogue that the artist hopes to start in the first place, by making the art (which was much, much harder to do than any non-artist can fully comprehend).

Even a negative review is a salute to the very impulse of an artist to create. Oscar Wilde famously argued that criticism itself is an art form, but even if you don’t quite buy that, you probably would agree that artists aren’t making work only to see it disappear into a black hole of mindless cheerleading, which most published art writing is these days, or, even worse, no reaction whatsoever. The very existence of real critical writing is evidence that someone is paying attention. Legacy journalism (I mean the grand tradition of print journalism) has lost money in our technology revolution and cut critic rosters down to nearly nothing in most American cities, while social media has provided anyone a platform for shallow hot takes on everything from breakfast cereal to Drake’s new album. With this, the dilution and disappearance of thoughtful, sophisticated criticism — the kind that requires the checks and balances that comes with working with editors and being published and paid — is tragic, and it seems especially pronounced in Texas, the third largest art market in the country, where criticism is already treated as suspect.

But artists are brave. They break rules and put themselves out there, very publicly, through their work. The people who write about it should rise to the challenge of meeting them where it counts — publicly, and professionally, and embrace the higher stakes of putting their name to it and banking the check that comes with that risk. (You try sleeping at night if you’ve written a paid review you don’t actually believe in. I don’t recommend it.) Art criticism can be thrilling — for a writer and for its interested audience — and at this point, it feels urgent. Artists need your voice, art lovers need your voice, and Texas needs your voice. Write to us about art you love. Tell us why you love it. Glasstire is listening.

Christina Rees is the Editor-in-Chief of Glasstire. She is an inaugural winner of the national $50,000 Rabkin Prize for Arts Journalism, and was recently named Best Critic in DFW by D Magazine. She will serve on the jury of the upcoming Glasstire Art Writing Prize.

“And the glossy lifestyle magazines and ‘curated’ Insta-sites that only embrace the forced glamor and fluff around visual art aren’t giving them (or art fans) this, or starting any meaningful conversation around art and what it can actually do in our culture. ”

As someone who writes about visual art for a “glossy lifestyle magazine” and co-produced two podcasts for Glasstire, I don’t believe one platform inherently generates a more “meaningful conversation” about art, music or whatever than another. I go deep when I meet and interview artists, and the diversity voices I’ve had the opportunity to present in print reflects my need to push myself out of my comfort zone, and discover new things.

I understand you’re rallying the cry for critical writing, and the wonderful opportunity Glasstire is offering student writers, but why paint yourself (or others) into a corner when it comes to deciding whose “conversation” is meaningful or needed or not?

Yes, we need them. We also need them not to be bombarded by whiners and hacks after they do their job. This state needs criticism, just like it needs art. Not all of the criticism will be good, but I’d bet the greater majority is stronger than the amount of art put upon the viewer- our standards have gotten a little out of control, and that could be a direct result of the lack of critical writing. If there is a string of negative articles or posts about exhibitions, then I could see certain people defending, but to have one or two critical reviews a year, that don’t just splash praise upon local texas joes, is sad. With the amount of exhibitions and spaces doing work, we should see a greater amount of strong, critical writing.

Kudos to those that give writers a platform. The artists should want healthy dialogue, for good or bad, about the work they sometimes thanklessly display.

As an Artist.. .CREATIVE SPIRIT, I am constantly seeking and provoking people to engage their thoughts on art rather than the obsurdiry of “I like the colors.” With my own art, I am truly interested in how my work resonates/affects. Sure, I can be the biggest and greatest fan of my own work but that’s just ‘one + none;’ so I do seek honest critical thought and writing. And, it is true that the best artist, especially, want (and deserve) critical thought and writing in regard to their work.

Thanks Glasstire for offering this art writing prize. Texas desperately needs a new generation of art writers and critical art participants. I truly hope this prize will help get the ball rolling and inspire people, not just the prize winner to get out there, look, think, write and publish their opinions.
I also strongly encourage my fellow artists to help promote this art writing prize. It is afterall in your own best interest to support writers. There is a old quote that still haunts me “If your exhibition is not reviewed it never existed”. Sadly if true, most of the art and cultural events in Texas never existed…. On a good note, the lack of art coverage in Texas means an art writer has LOTS of material to choose from.
Cheers for art writing. Cheers for Glasstire.
Brad

I have personally been pushing this idea for the past two months with The Houston Review and was excited to recently see a critical review in Houston. I am currently working with many Houston artists, writers and galleries on finding funding and ways to get more writers covering local exhibitions. As we have a open discussion on Critical Writing in Houston this Thursday, 4:30-6:00 at Gray Contemporary. As there are are many exhibitions in Houston that deserve good and bad reviews and currently there is a huge void. Great article!

This is a great idea, GT. We do need more criticism, both positive and negative. But why is this writing prize open only to students?