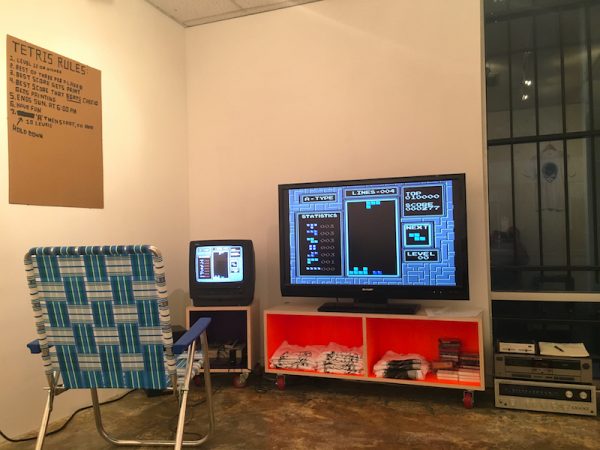 Chris Cascio Sells Prints, T-Shirts and Zines While Playing Tetris was the name of a recent pop-up shop and exhibition by Houston-based artist Chris Cascio. Changing direction from his sculptural works and paintings, Cascio created a limited edition of silk-screened prints and works, which was released on July 20 at the opening at BS Gallery in Houston. The sale lasted two days. The project and body of work featured a selection of new-off-the-line t-shirts, zines, and small edition books.

Within Cascio’s work, there’s always a journey through the realm of obsession, compulsion, ritual, and hoarding. He dances along the lines of passion and pathology. But with this pop-up exhibition, Chris Cascio Sells, the artist took a side step from his typical hard-edge abstraction. Unlike his previous work, often based on quilt patterns and color interaction, Cascio has created a new core sample of madness. The evening was lively as viewers entered an (almost) living room- or bedroom-like setting. Participants were invited to compete with each other by playing the classic Nintendo game Tetris, which was set up on one side of the room in a makeshift entertainment center. Cascio’s new publications, zines, and shirts were on display throughout the room. 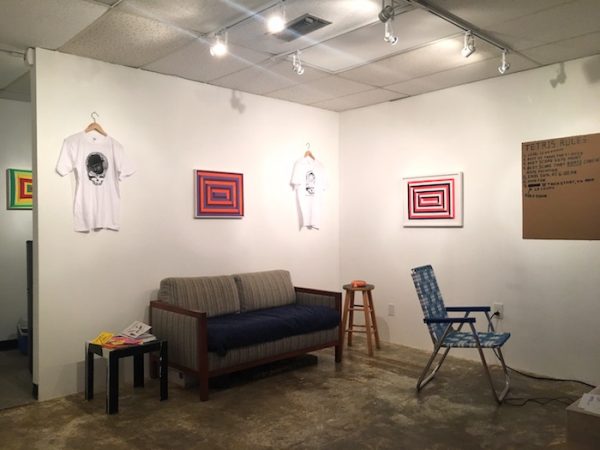 It wasn’t your typical art opening; this one created a “Sit and Chill” environment, which works well with Cascio’s practice and the vision and purpose of Bret Shirley’s new BS Gallery. Make it fun, make it new, and present everything the way it may be experienced in a gathering at an artist’s studio, or impromptu party. Chris Cascio Sells Prints, T-Shirts and Zines While Playing Tetris was a surprisingly free-range experience.

I had a chance to catch up with Cascio and to dive a little deeper into the inner workings of the exhibition and event.

Paul Middendorf: Can you walk me through the idea you had in collaboration with artist/curator Bret Shirley and BS Gallery?

Chris Cascio: It was really a combination of two ideas.  A couple years ago when Bret got his studio and was spitballing the idea of opening a gallery out of the reception area, I came up with an idea was was basically me sitting in the room playing Tetris for the duration of the show. Playing Tetris is a big part of my studio process, and I was trying to figure out a way to exhibit what was becoming a full-time obsession. The second, more recent idea came out of the desire to make a screen print and needing a venue to release it. I’ve been bulking up my merch game, and was producing some serial items (zines and tapes) that I was also interested in getting out there. So I turned the Tetris performance into a contest and loosely based the installation on a bedroom. It kind of culminated in a retail store, performance, and installation work, all at the same time. 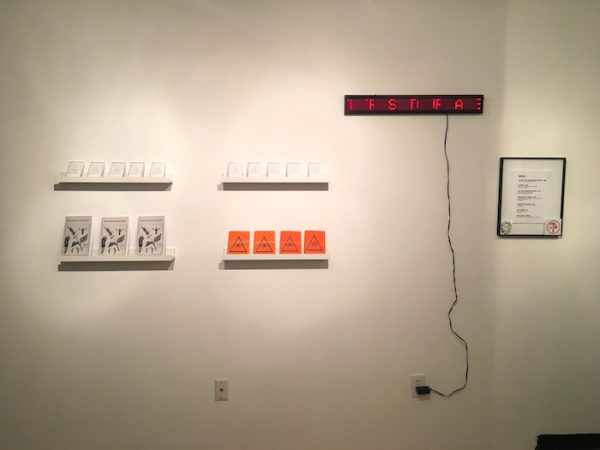 PM: So, changing the exhibition idea up a bit and making more room for the viewers to be an active part of your process. Making it comfortable to hang out and enjoy the space. What was the overall goal with the show and installation?

CC: The overall goal was to make work available at a lower price point than my paintings, and to have an event that engaged people to play Tetris. And also to sell some stuff. Over the weekend, the show lasted a combined 18 hours. The installation itself was designed to be a minimal boutique that was as comfortable as someone’s den. There was a late ’80s – early ’90s thread running through the whole thing that was probably more on my mind than it was obvious to others. 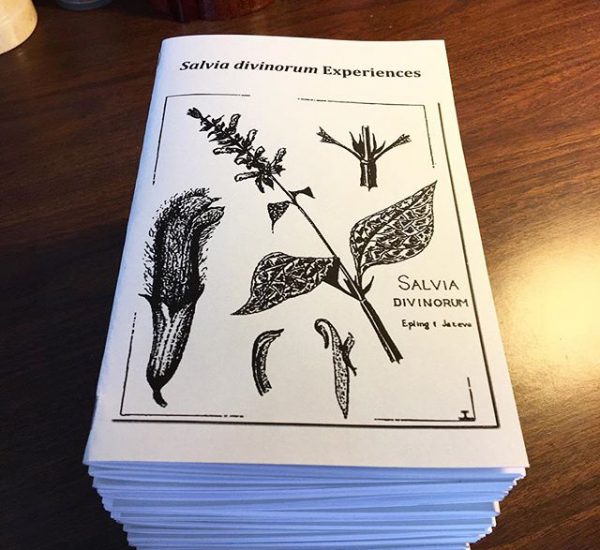 PM: Your zine exploration has been quite a change from your other studio work. What influenced the Salvia Zine… besides Salvia?

CC: I explored the Salvia experience pretty thoroughly around the turn of the century when it was becoming known for its hallucinogenic properties and was still legal in all 50 states. It’s not what I’d describe as a pleasant trip, but it’s short and intense. One can expect physical sensations of unknown forces pushing, pulling or compressing your body and head.  I’ve always used the messageboards on erowid and elsewhere to research drugs before I took them, or simply to read the trip reports, which were oftentimes pretty hilarious. I read the book Trip: Psychedelics, Alienation, and Change by Tao Lin, and there’s a chapter on Salvia that brought it to mind and I was reading these trip reports trying to find stories that reflected the difficult-to-describe experiences I had had almost two decades ago. I also started looking for images that users of the drug had drawn to illustrate the specific effects of the trip. There was enough for a good-sized zine, so I put it out. 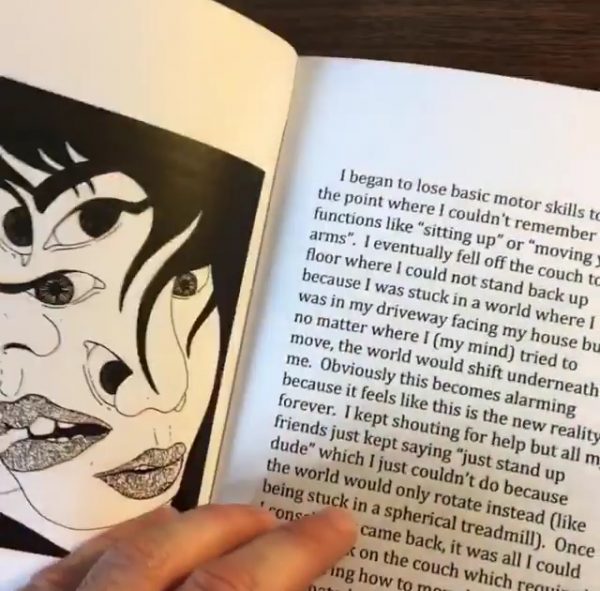 PM: Is your Salvia zine autobiographical?

CC: Aside from the stories being similar to my own experiences, no. The stories are collected and edited by myself. I am planning a second edition which has my own personal experiences as well as some stories I’ve begun collecting myself.  Have you done Salvia?

PM: Ha. Well, not yet. Let’s say that it’s on the bucket list. Your works have always been about you and your experiences, the habits you have, the items you collect or hoard, and the process, which highlights your obsessions. Would you say this recent exhibition or event was a way to let the viewer into your studio practice and give us a deeper look into you?

CC: I think it’s definitely a deeper look into what’s going on in my world. Everything I was doing in the mid ’90s as a teenager (printing bootleg t-shirts, making zines, dubbing cassettes) has become a big business and side hustle for many artists. Making these things again was nostalgic for sure. And it made sense to combine them with the Tetris, another late ’80’s/early ’90s phenomenon, in a sort of “ode” to that period of my life. And a take on the cyclical nature of life/art/etc. Not much has changed. 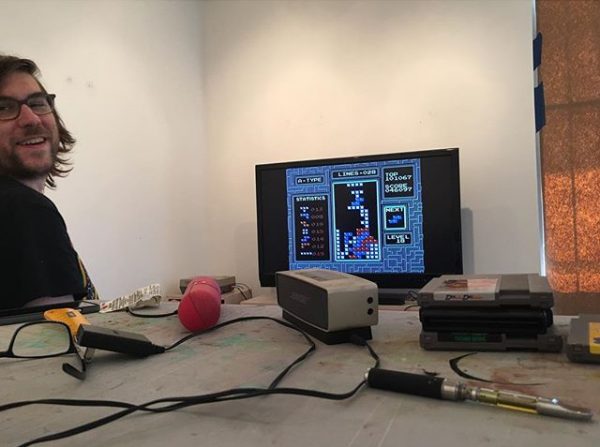 PM: Who needs change?! I’m down for living in that past moment. What’s next on the horizon for you? What new projects do you have in the works?

CC: I’m working on a couple more zines, a Bath Salts news clipping compilation, and a Salvia Volume II, as mentioned before. I’ll have a table at Zine Fest in November, and those will be out then, as well as other flat stock. I’m trying to get a show lined up for my paintings, which are piling up. My website is way out of date, so the best way to see new work is my Instagram feed.

This and That: Christopher Cascio & a Gee’s...