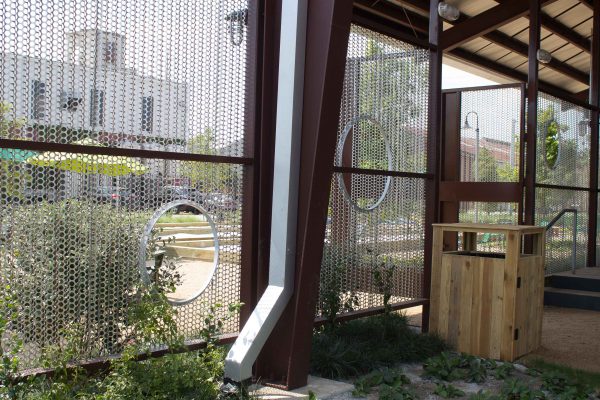 Last week, Saint Arnold Brewing Co. in Houston opened a new beer garden and restaurant next door to its brewing facility on Lyons Avenue, just north of the city’s downtown. As opposed to the heavy brick and concrete building that houses the brewery’s production, this new restaurant is airy and open while still maintaing, on its exterior, an industrial look. The building was designed by Houston-based architecture firm Natalye Appel + Associates in partnership with OJB Landscape Architecture. Exterior architectural embellishments of the structure, along with the plant life and radiating arms of its outdoor beer garden, allude to the process of brewing. 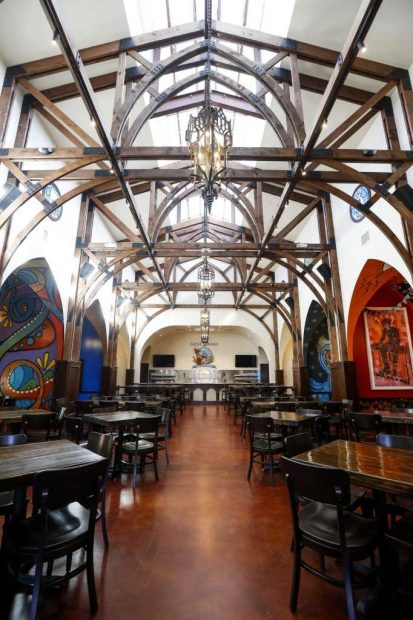 The interior of the building was designed with the brewery’s namesake in mind: wooden beams mimic the arch of Saint Arnold’s pointed hat, and metal chandeliers give the building a cathedral-meets-Game-of-Thrones feel. Six side-chapel alcoves featuring murals by local Houston artists flank the space, which dead ends at the bar. Each artist was given creative control over their chapel, filling it with their own stylistic interpretation of what the space needed: GONZO247, a former employee of the brewery, painted a piece that acts as an abstract representation of the brewing process, using his signature all-over approach. Printmaker Carlos Hernandez went against the idea of his space being a “chapel,” instead filling it with images of horned skulls, snakes, and pin-up ads. 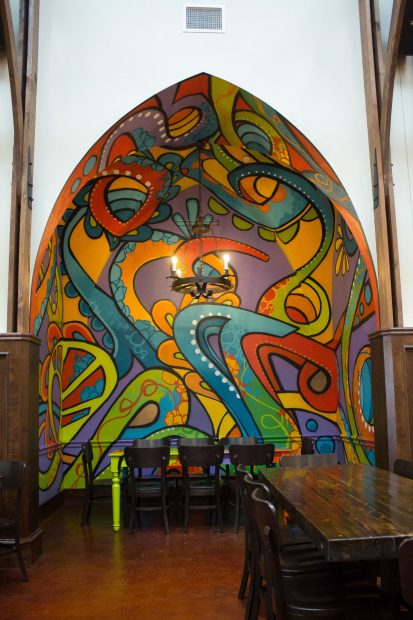 Robynn Sanders was also inspired by the brewery and chose to depict Saint Arnold in a pastoral landscape along with four goddesses representing the ingredients of beer: malt, hops, yeast and water. Jeff Szymanski took a more biblical approach and created the Beer Garden of Eden, complete with cohabitating animals and figures modeled after the artist’s friends. The final two chapels — murals by Nick Papas and Matthew Schott — are perhaps the most churchlike. Papas is an Orthodox Christian iconographer and it shows: Saint Arnold, clad in modest robes and adorned with a golden halo, kneels in prayer. The Saint is flanked by two symbolic representations of his miracles: a never-ending beer mug, and a ring that the Saint threw into a river, only to have it returned inside a fish he ate for dinner. Perhaps the most austere and bare, Schott’s chapel features a large-scale depiction of the Saint, this time clad in regalia and holding a staff. The two flanking walls feature images representing the brewing process, and the Saint’s miracles.

In addition to the murals, three of the chapels have custom tables: GONZO247 and Hernandez painted their given tables, and Schott drew on his experience as a furniture maker, making a custom table to go with his installation. 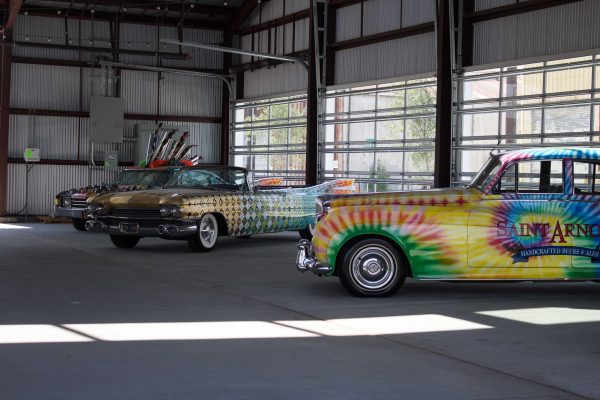 A few of the six artists chosen to create works for Saint Arnold’s new beer hall have worked on projects with the brewery in the past: In addition to working as a bartender for the brewery, GONZO247 designed the artwork for its Art Car IPA, painted a few of its art cars, and created murals on some interior and exterior elements of Saint Arnold’s brewery. Hernandez designed the artwork for Saint Arnold’s Santo, and also painted two of its art cars. Sanders has also painted some of the brewery’s art cars, and not too long ago painted a mural in a stairwell leading up to its former everyday beer hall. A rotating selection of the brewery’s art cars, along with other art cars created by Houstonians, will be on view in a breezeway located at the back of the building, facing the street. 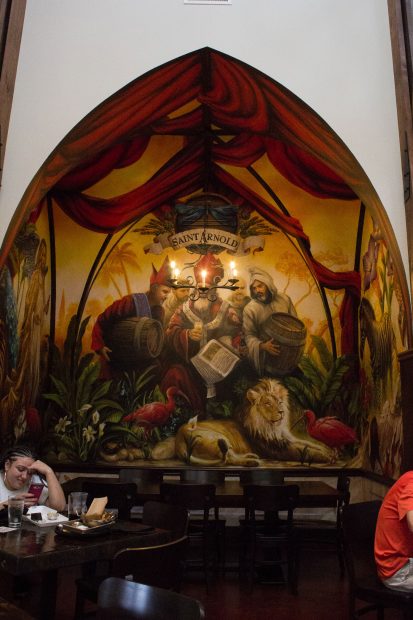 Saint Arnold has long been a supporter of the arts. Its founder and owner, Brock Wagner, regularly drives the brewery’s cars in Houston’s annual Art Car Parade, and the beer hall has annually served as an event space for the the city’s printmaking gatherings, including It Came From the Bayou and Rockin’ Rollin’ Prints. Wagner commented to Glasstire on why he chose to incorporate chapel installations by Houston artists into Saint Arnold’s new beer hall:

“I wanted to use art as a way for people to experience the Beer Garden & Restaurant in different ways. Turning the chapels into immersive art installations with artists we had worked with in the past was exciting for me.” 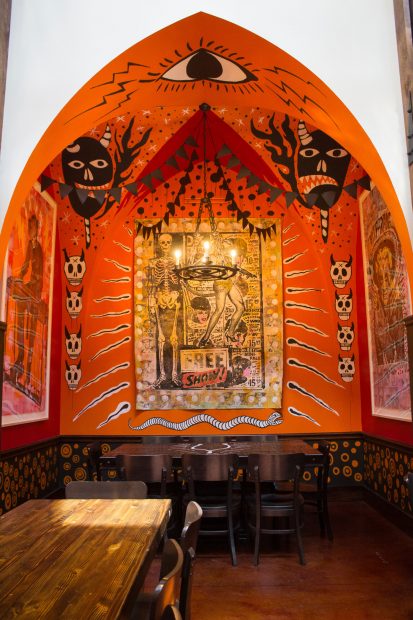 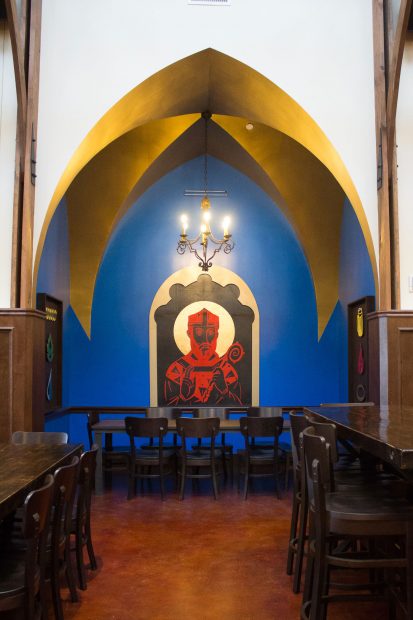 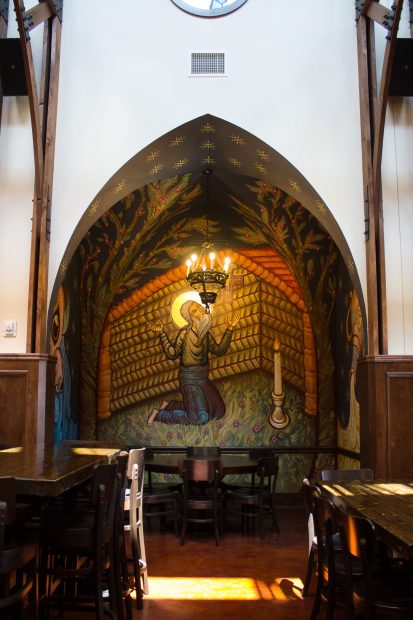 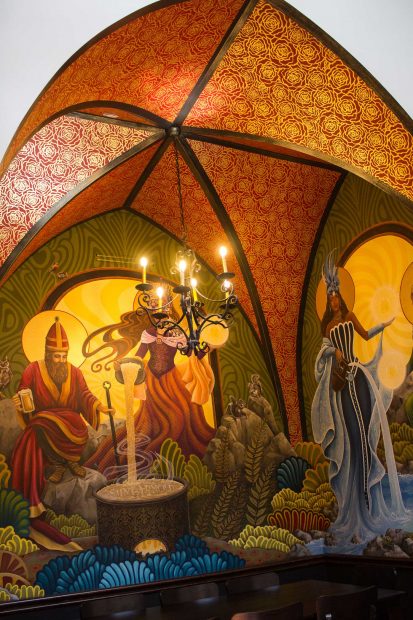 Printmakers Descend on Houston with the 8th Annual...

As a huge fan of Hernández’s work, I have to admit I’m so glad that stuff like this exists. Sometimes corporations think they’re doing artists a huge favor by providing opportunities like this for artists, when in reality they just need something to decorate an otherwise bland public space. Saint Arnold’s has demonstrated the opposite, that by funding artists expression, and placing a value on it, they are investing in the whole cloth, a community where artists and their work are integral to the scene and celebrated.