Earlier this month, a new mural by Angel Quesada, an artist also known by his moniker “ARTKUNGFU,” went on view in Houston’s East End. Commissioned by the Morales Funeral Home and executed on the side of the newly opened Morales Radio Hall, the mural celebrates the culture and traditions of the traditionally Hispanic neighborhood.

The Morales Family has a long history in Houston’s Second Ward. In 1931, Felix and Angela Morales moved to the city and, using a $150 loan, opened Houston’s first Hispanic-owned funeral home at 2701 Navigation Street. After struggling through the Great Depression, during which the couple handled the production elements of funeral services themselves (Felix built caskets and Angela sewed clothes for the deceased), the couple decided to expand their reach in the community. To do this, they got into radio by subletting time from a station for a Spanish-language program. In 1950, the Morales’ founded their own radio station, KLVL, “La Voz Latina,” the city’s first Hispanic radio station. Although the family no longer owns the station, its former headquarters has been turned into the Morales Radio Hall, an event space open to the community. 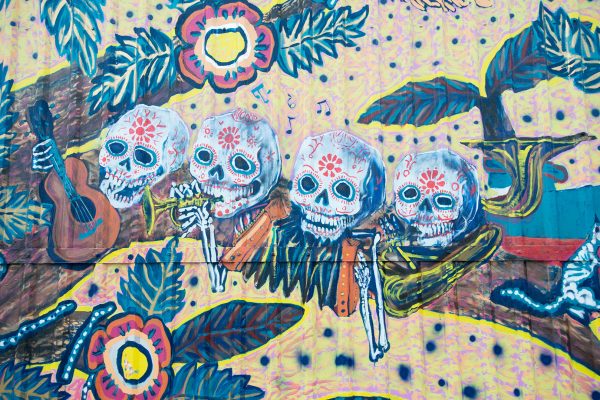 Quesada’s mural on the Morales Radio Hall ties the family’s history in Houston’s East End with elements challenging the wave of gentrification sweeping into the area. In a press release about the mural, the Morales Funeral Home commented on the concept behind the piece:

“The new mural was created in reaction to a neighborhood witnessing its shifting landscape and being supplanted by newer 3 and 4 story gated luxury residential complexes. It looks at the history and augments a sense of the familiar for people that live and work in the area. Much like the other two murals within walking vicinity by the artist, the Muertos Mural pays homage to the actual place in which it exists.” 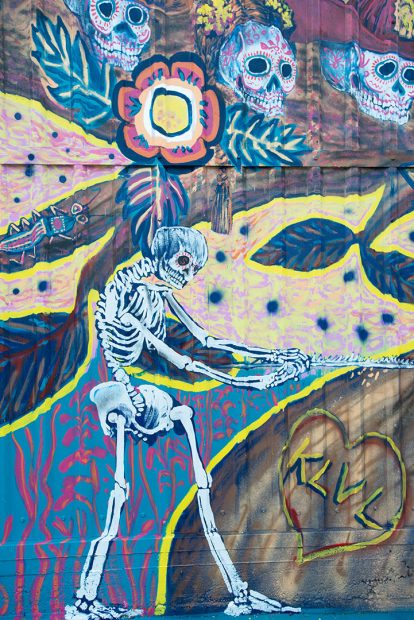 Quesada told Glasstire that his creation of the mural is a response to community members he encountered while conceptualizing and painting the piece. The mural is a protest to the lofts and townhouses that are inching closer to, and invading sections of, the neighborhood, as noticed by Quesada and other residents. Before painting the mural, Quesada said that he spent almost a month contemplating its site, studying the traffic, lighting, and engagement of passersby. He then worked on the piece for a period of six weeks, painting it using spray paint and latex acrylic. Quesada also told Glasstire about the mural’s imagery, and why he feels it is an important addition to the Second Ward community:

“In my mind I wanted to create the mural that served as an altar to memory. Ideally the base of the mural would be a place where visitors could bring items and create a shrine to their lost loved ones. What better metaphor than a huge tree, it has roots and it grows towards the sun yearning for life! The calaveras (skulls) were a natural fit because of the dominant Mexican American population and the fact that it was a funeral home commissioning me to create the work so there is a bit of humor that helps the audience easily read the work. The work is a functional piece created with this utility in mind. It serves to beautify the heart of the 2nd Ward and acts as a flag planted to “never forget” the past.

Being a Chicano artist myself, I knew that I had to act. The East End is a special place in my life (I am a resident) and my goal is to expand and create the sort of narrative works that other Chicano muralists, most notably Leo Tanguma, have created for this community. Many have no arts education or awareness of these notions of gentrification. Much like the Mexican muralists who used art to create narratives for this cross section of people, I strive for this readability. Immigrants helped shape this neighborhood and frequently are under-served by the arts. In this case I took initiative and have been creating street art in the East End since 2013. I plan to continue this type of intervention and plan to create more large murals in the area.”

You can find murals by Quesada on various buildings across Houston. He was also included in the 2013 exhibition Call it Street Art, Call it Fine Art, Call it What You Know at the Station Museum. You can now view Quesada’s mural at the Morales Radio Hall (111 N. Ennis Street, 77003). To see more art by Quesada, visit his website.