The Most Notable Paintings of the 21st Century (So Far)

My fellow art-world dwellers, I’ve compiled for you a list of notable paintings produced since the beginning of the 21st century. It’s understandable that an art-world dweller would brush off a list focused only on paintings made in the most recent 18 years of our world’s entire existence, but before dismissing me, at least consider my thesis.

This list contains those rare moments when a painting escapes our art-world bubble and finds itself in the far more populated world of general pop culture. To clarify, these moments only occur when an artwork’s ability to be commented on and analyzed breaks free from the gravitational pull of art’s academics, literary magazines, museums panels, etc., and turns up on your uncle’s Facebook newsfeed, or HuffPo, or gets a Tweet from a bona-fide celebrity who isn’t a collector or in the art world at all. And this list, in the end, reveals what I consider to be the most culturally significant painting of the 21st century thus far, based on its pop-culture reach.

I’ll begin at the bottom of the barrel, so to speak, and give a cursory nod to a 4th place tie by Jon McNaughton and Jim Carrey.

This is a Jim Carrey painting: 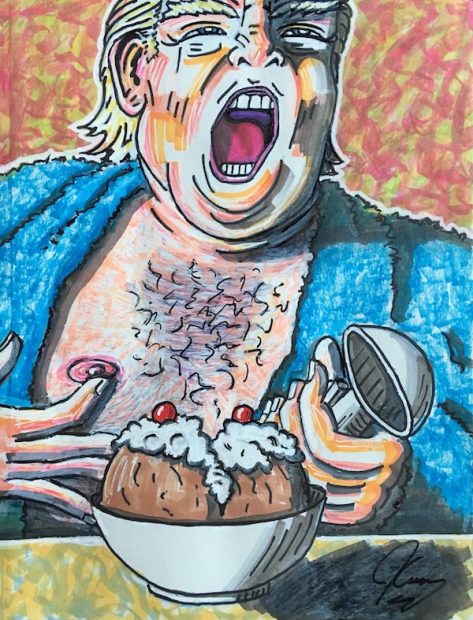 More of a cartoon than painting really. He does use paint to make the thing. 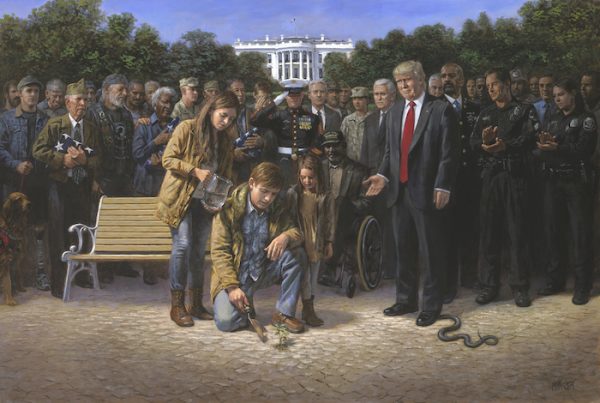 He uses paint, too.

Why in the (art)world would I include these guys? Do these guys belong to the “art world” simply because they use paint and paint brushes and canvas? Maybe… if there’s an actual market for the work, and apparently there is a market for them. People do buy these things. So, technically, this should be enough for a claim that these paintings emanated from an art world, if not the art world. Yet, by my reckoning, just barely. They live in our periphery.

McNaughton leans on easy-to-identify pop-culture celebrity as subject matter, while Carrey’s pop-culture bonafides cements his celebrity painter status. Their cultural position is rooted in pop, and they’re on the list not for any one particular painting, but more so because of the fence they ride between the art world and general pop culture, which have been circling each other closely since at least Warhol. And it’s a lot easier to get somewhere if you’re already from there, or at least the vicinity. 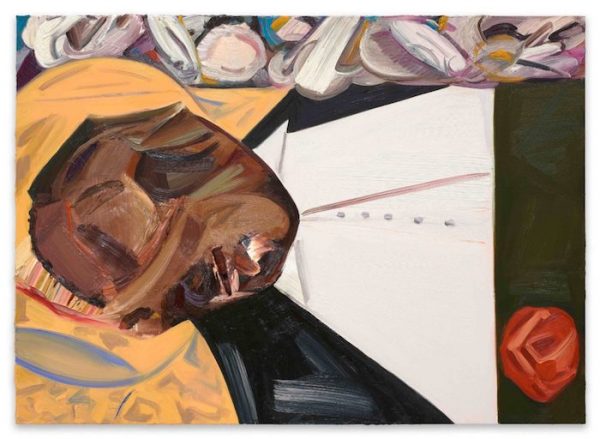 You know this painting. Every print or online art magazine reported on it; there were tons of articles and op-eds about it by national and international artists, art professors, museum directors.

Yet, if you asked your FaceBook uncle about it, chances are it may not have registered with him. What makes the painting controversial is very much a part of our political moment, and while it caused quite a stir in the art world, the names attached to it (Schutz, the Whitney Biennial) don’t have enough velocity to propel the issue into the general pop-culture landscape, which is one that has little time for detail or nuance. (Nonetheless, the conversations and arguments around this painting were, for an art-world concern, rousing and sustained.)

Next on the list is another sort-of tie. Two separate paintings, by two different artists, but here I consider them as a pair. It’s the Obama portraits: 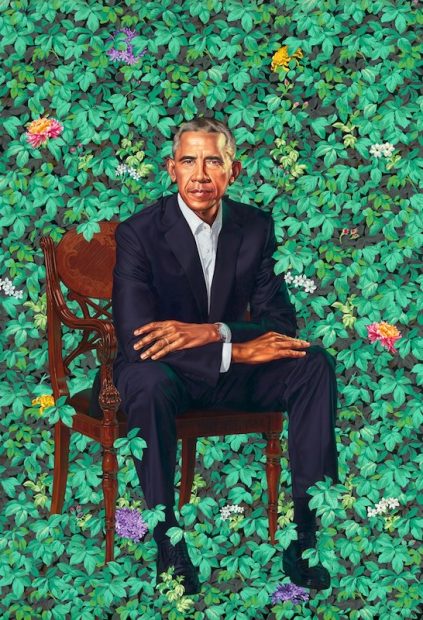 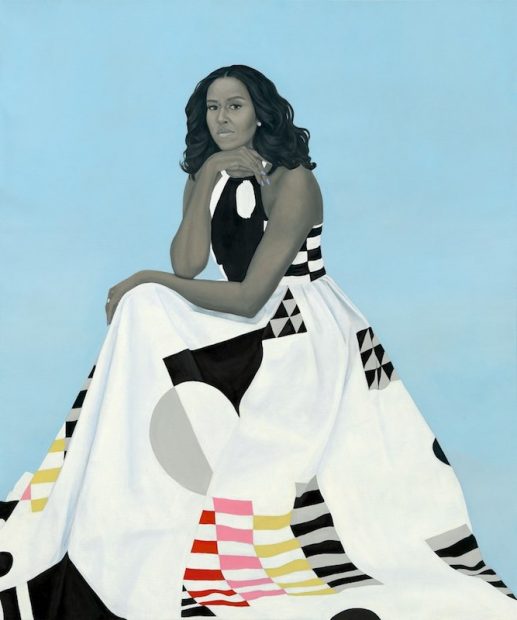 They’re by Kehinde Wiley and Amy Sherald (respectively). Again, huge art-world press. And in this case, when unveiled, they sparked tons of online dialogue and a big crossover into pop-culture static. It even brought out racist Twitter trolls, which fine art seldom does. I would argue, however, that it was a provincial pop-culture moment, and by that I mean a solely U.S. one, in that it only caused a stir here and not globally. I doubt that a Spanish futbol fan with no interest in art would have noticed the chatter about these paintings.

Which leads me to what I consider the most culturally significant painting of the 21st century: 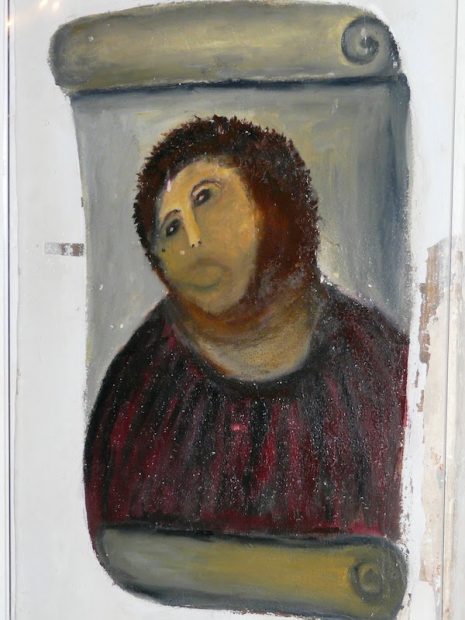 Although technically a restoration done in 2012, it’s so far from the original that it’s taken on its own identity. The naivete and lack of skill as a restoration propel it to the status of being an original work in its own right, and more in line with the post-production, remixed culture of current art making.

Executed in a classic art medium, fresco, and extensively reported on in the art world, it has its roots in weird art-world moments, yet the global reach via viral social media makes it easily the most recognized painting of the 21st century. No matter where he lives or what news he follows, your Facebook uncle knows this painting, and that futbol fan from Spain knows it, too. It’s not even close.

Finally!!! Straight White Male Artists Get Their Due!

Botched Restoration May Not Be So Botched

Your post feels intellectually lazy, and silly. You are doing that political “both sides” thing that is the business model of mainstream news outlets by comparing Jon McNaughton’s painting to Jim Carrey’s. You don’t need to. Clearly, however ideologically conscripted McNaughton is, he knows how to make a representational painting. It’s not clear that Carrey does. Claiming that they both rely on the vernacular of pop is just a way to sneak in someone who is deeply stupid into the conversation. (If you support Trump given the kind of appalling human being he’s proved himself to be, the conclusion that you are stupid is inescapable.) But more to the point, your methodology needs scrutiny. How does one measure cultural significance?