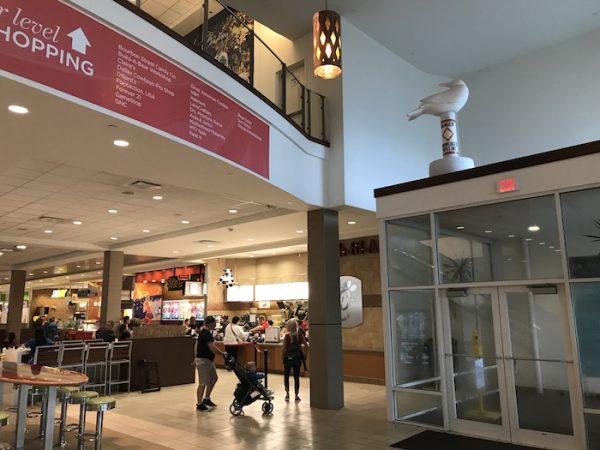 Artists have long used non-sanctified or alternative spaces to display work; there’s a built-in novelty and spectacle to it. It’s certainly happening all over Texas, as with recent examples like Nestor Topchy’s funeral home in Houston or Dark Dirty Place’s ongoing flea market in Kyle. Part of the appeal is that there’s a narrowing of audience to “those who came to see this.” (On the inverse: mass-attended, selfie-fodder exhibitions at museums.)

Many “alternative” places are, of course, not empty warehouses or storefronts, but rather ones that are already accessing a wide-ranging and non-art-seeking audience: an airport, a public square, a mall. Some works in this category have been curated into the space by committee or corporate concern, and can feel pretty low-risk, unobtrusive, and easily photographed — part of a “soothing environment.”  But sometimes in these kinds of spaces, the people behind the work and the work itself is more surprising.

K Space Contemporary, a non-profit based in Corpus Christi that was founded in 1995 and expanded in 2006, began a public arts project in April 2018 in partnership with La Palmera mall in Corpus. This mall plagues me with nostalgia — memories of driving the three hours from the sticks to the big city to make perfunctory back-to-school purchases. When I was young, a mall was exciting and seemed so metropolitan: the peaceful hum of other shoppers and water fountains, lots of atrium-style lighting and warm, buttery smells. But sprawling malls, like any other profit-driven commercial space, are hyper-political spaces. And of course the indoor malls are becoming the ruins left behind by a growing online-economy.

The artworks that K Space has installed at La Palmera are discreetly placed, tucked away. Greg Reuter’s oversized seagull sculpture Sentinel (pictured at top) would go unnoticed by most shoppers were the information sign not placed in the middle of the walkway below. 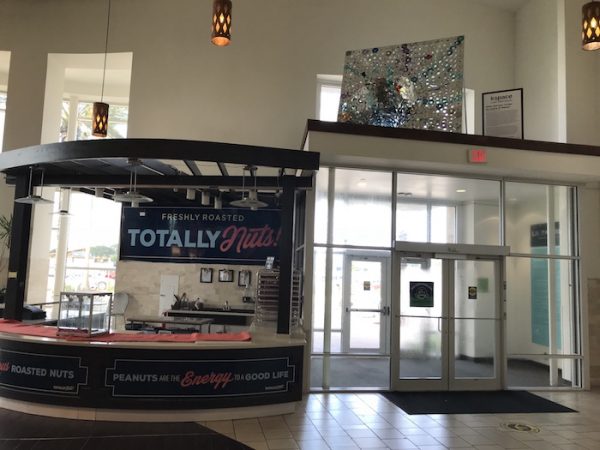 The most visually compelling of the works, Leticia R. Bajuyo’s Shiny Entropy, which is a vortex of CDs, reads like a black hole of outdated personal information, from computer backups to wedding videos to mix tapes. If you read the recent articles about Facebook and Google’s data on you, and how it never really goes away, Bajuyo’s archaic tide of technology could be the kind of physical manifestation of this notion that makes you shit your britches. 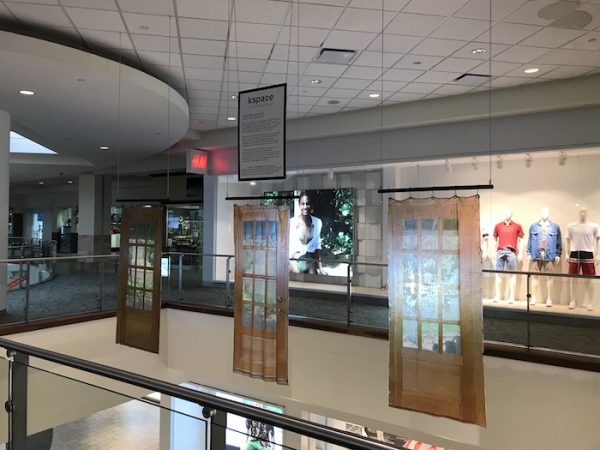 K Space aims to eventually have an open call on this project through its website, rotating artists every four months. This really could be turn out to be an interesting and fairly democratic exhibition space for serious artists. The majority of people in the mall at any given time are food-service and retail employees, retirees getting their daily steps in, and parents gathered around the indoor playground, trying to resist the aromatic pull of the American Cookie Company. The demographic also consists of high-school mall rats and bougie young adults devouring the fast fashion of Forever 21. If an artist wants the work to sneak up on you in a decontextualized way,  it’s easier to produce that effect in a place like a mall than in any museum or gallery. The mall competes with the work, and for some artists, that’s good: the banks of brightly lit store adverts and murals of gleaming svelte bodies make works like Jennifer Arnold’s suspended transparent Frenchdoors incredibly difficult to photograph. Perhaps “mall art” is one antidote to the death of the museum.

Another version of this article appeared on July 4, 2018 in The Bowerbird, an art blog in Lubbock, TX.