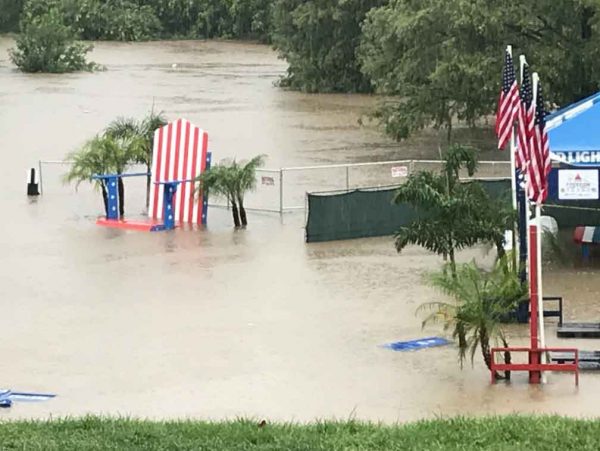 Since Hurricane Harvey, cities along Texas’ coast have dealt with the post-storm fallout in a number of ways: in Rockport, a small coastal town in one of the state’s hardest-hit areas, arts organizations have been teaming up to present programming and exhibitions in alternative and temporary venues, including the Rockport Center for the Arts’ annual Birds in Art show, which was moved to the Art Museum of South Texas in Corpus Christi.

In Houston, a number of organizers quickly formed the Harvey Arts Recovery Fund, which dealt out grants to affected artists and spaces. Carrie Marie Schneider, who was one of the inaugural Project Row Houses / UH College of the Arts Center for Art and Social Engagement fellows during the storm, has developed the Harvey Baths project, which is framed by the question: “Can Houstonians renegotiate our relationship to water post-Harvey and in the face of climate change by designing our own paradigm shifting baths?” And after Harvey, art spaces were quick to program exhibitions examining the immediate and possible long-term impacts of the storm on the city.

Now, Houstonia reports that a number of groups around the city are partnering to create the Houston Flood Museum. Initiated and funded by the Houston Endowment from a concept by Rice University assistant professor Lacy Johnson, the museum will be a nomadic collective that plans to organize pop-up shows across the city. As Johnson said about the museum:

“We’re kind of nomadic and ephemeral. I like to think about it using the flood as a metaphor: We’re inundating spaces for a short time, and then we recede.”

While the Houston Flood Museum has obvious connections to Hurricane Harvey, it aims to encapsulate Houston’s predisposition to flooding in a broader context. For example, in the past few years the city has faced a Tax Day flood, a Memorial Day flood, and most recently, (yesterday to be exact), an Independence Day flood.

Ultimately, the Houston Flood Museum’s website will act as a repository for accounts about Houston floods. Currently for the museum, Houston Public Media is working on a video series and a podcast about Harvey, and Rice University’s Harvey Memories Project will assist in preserving other accounts. Ultimately, the museum could extend beyond Houston, as Johnson told Houstonia:

“My hope or ambition for this project is that it’s a think tank, but with art. With creative work, in the way that art is a form that research can take that we’re thinking through policy and working on people’s imaginations and compassion for one another. In the long run, we’ll expand the scope to the Gulf Coast, forward and backward in time, and perhaps look more broadly and globally.”

The Houston Flood Museum will begin accepting story submissions through its website in August of 2018.

Correction: July 6, 2018
An earlier version of this article claimed that the Houston Flood Museum was initiated by the Mayor’s Office of Cultural Affairs, the Houston Center for Photography, Houston Public Library, the Trust for Public Land, Rice University assistant professor Lacy Johnson, and others. The museum was actually initiated by Johnson with support from the Houston Endowment, with the other organizations and the Mayor’s Office coming on later. Also, the Houston Center for Photography is not involved, but Fotofest is.