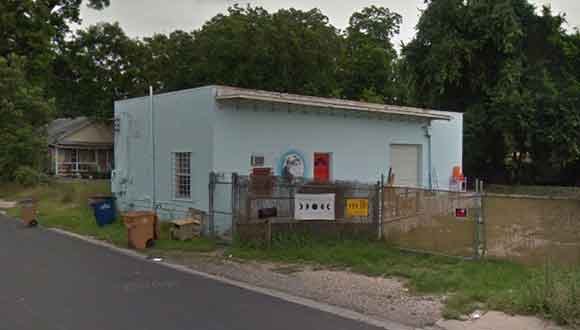 MASS Gallery, a longtime Austin-based artist-run space, learned this past spring that it will lose its current home to “make room for an internet startup.” Since November of 2013, the space has been located at 507 Calles Street in East Austin in a complex that houses a screenprinting shop, a brewery, and other establishments. MASS has told Glasstire that the organization has signed a five-year lease on a new space less than a mile from its current location. Formerly the home of Moon Collective’s ceramics studio, the building, located at 705 Gunter St, will provide MASS with an 800-square-foot gallery space, a 200-square-foot studio space, and a yard to use for performances, film screenings, and other community events. (Moon Collective will still be around — it is moving to a larger studio space.) This will be a downgrade from MASS’ current space, which is comprised of a 1500-square-foot gallery space, five studio spaces and a retail space, totaling 3000 square feet.

Prior to MASS’ move to Calles Street, it was housed in the Blue Theater complex (behind Canopy) from 2006 to 2010, and was nomadic from 2010 to 2013, focusing on public art projects and pop-up shows. MASS was founded in 2006 by a group of Austin artists, including Aaron Dubrow, Erin Curtis, Jared Steffenson, Jarrod Beck, Scott Proctor, Rick Mansfield, Eric Michaud, Virginia Yount, Jill Pangallo, Kurt Mueller, Ali Fitzgerald and Jules Buck Jones.

Before MASS moves into its new space, it will have to renovate the building. To help cover the cost of the project, MASS plans to host a closing party, auction, and store fire sale on July 21st. The gallery is also launching a Kickstarter campaign to help cover expenses. Construction begins on the new space this month, and MASS hopes to open its first show in the new space in October.

As we’ve written of other East Austin art venues that have lost their spaces, MASS’ move is part of a pattern that has been plaguing the city’s art scene.

what i often ask here is how much the rent is, but i don’t wanna know anymore, they are just very lucky to have nailed down a space imo