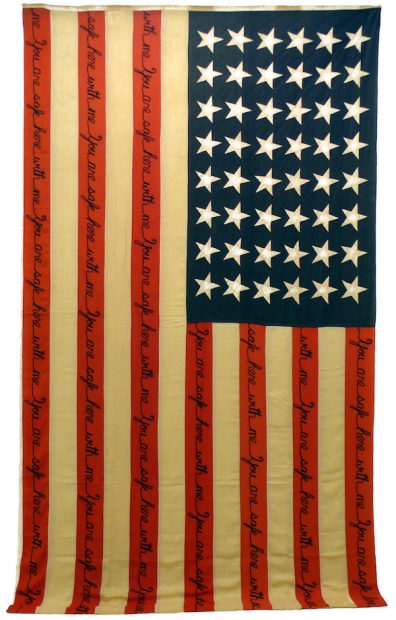 Sara Rahbar’s Carry me home is currently on view at Dallas Contemporary. Mixed media works by the Tehran-born, New York-based artist culminate with the piece, you are safe here with me. These six words repeat in embroidered lines along the red stripes of a faded American flag.

Rabhar’s flag nods to the notion of the United States as a place of refuge. By adding words to this iconic symbol, she presents a contemporary interpretation of the United States — a place founded by immigrants seeking safety from. Relevant political tensions are embedded in this work, which grapples with ideas of nationality, national identity and security as determined by national borders. 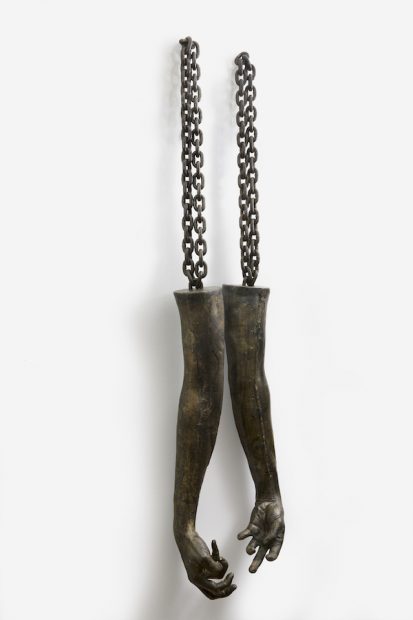 In the first room are piles of dismembered bronze limbs cast in a spotlight, and the works provoke an immediate and visceral response. Modeled hands reach out as free-standing sculptures and as wall-hangings. These human elements fuse with mechanical pulley systems in metal assemblages. This selection of work foreshadows a turbulence in the following rooms. 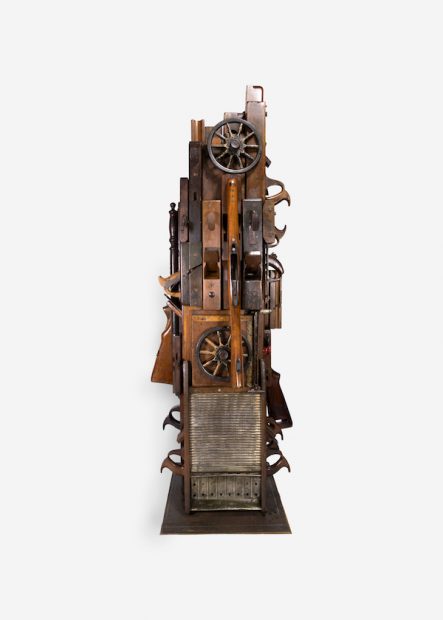 The second room contains sculptures made up of wooden objects such as rifle butts. The tension between danger and shelter echoes throughout. Separation and belonging are themes repeated in Rahbar’s work, and Carry me home delves into the lingering conflict between the two, and raises far more questions than answers.

The exhibition is presented with the premise of the home as a final destination. In the last room of the exhibition, opposite the American flag, hangs a canvas military cot emblazoned with a detailed world map painted in red. In depicting international bloodshed, the work illustrates the universality of violence inherent in both separation and belonging. Displayed together, the two pieces create an ironic commentary on security being as much a human construct as any national border.

Reading the words “you are safe here with me” in rows on a flag inside the Dallas Contemporary gives rise to the question of whether the ‘safe’ place Rahbar references is intended as the United States, or rather the art gallery, where artists are free to express such politically charged thoughts, ideas and experiences as a means of public discourse.

At Dallas Contemporary through August 26, 2018