[Sponsored] Debbie Stevens: Her Year of the Bird 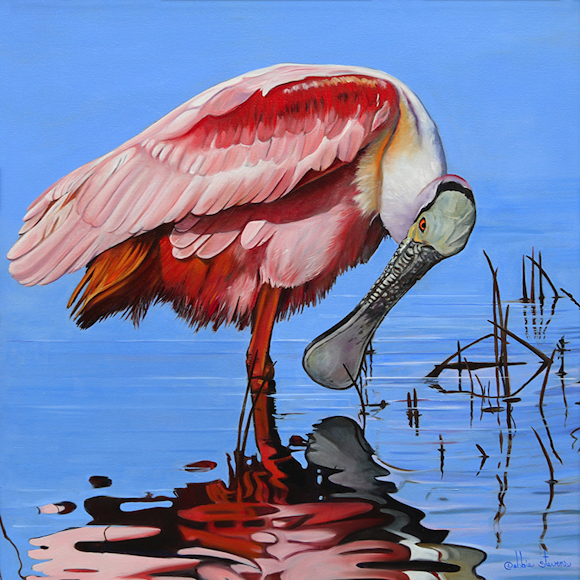 2018 is the Year of the Bird as designated by the National Audubon Society, National Geographic, BirdLife International, and the Cornell Lab of Ornithology, timed with the 100th anniversary of the Migratory Bird Treaty Act. The Year of the Bird seems to hold true even in the art world, as Hyperallergic very recently reviewed two New York Bronx exhibitions of ornithological art. Bird art is cool now. 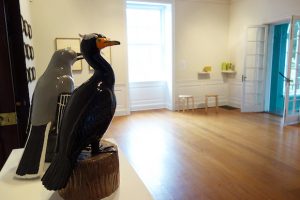 Installation view of Avifauna, with sculptures by Peter Morgan at left (photo by the author for Hyperallergic)

2018 is also a good year for Texas artist Debbie Stevens. She has received numerous awards over the years. For the fifth time, she was included in last year’s traveling exhibition of Birds in Art, and this upcoming year, she has been accepted again. Locally, she is the poster artist for the 49th annual Rockport Art Festival (a very big deal in South Texas) that takes place July 7-8, and her exhibition Taking Flight will  open at the Rockport Center for the Arts on June 16. The poster artwork is a surprise to be revealed at Stevens’ opening reception. We’ll all have to wait.

Debbie Stevens paints birds. Birds and water. Her birds are worthy of a John James Audubon print, precisely captured in their natural environments. Stevens studied painting (as well as graphic design) but also took a special class in bird photography. She now travels and follows bird migrations to capture subjects for her reference photos. The backgrounds, though, are usually abstracted to a large degree. Remove the bird (or leaf, in the example below) and it’s a beautiful abstract painting. 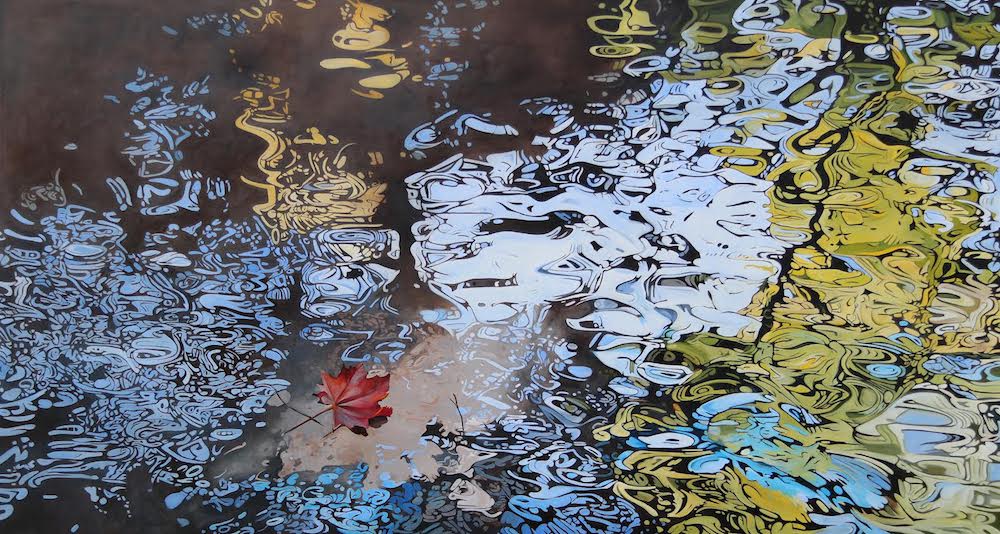 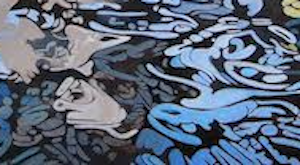 Stevens states that she paints the birds as “fuzzy” and the water as “busy and hard-edged.” The end result of bird-and-water is almost the opposite of that description and the usual consideration of realism versus abstraction. Some of her backgrounds are so intricate that it’s hard not to read rhythmic, cartoonish figures into them. The water looks like it’s truly dancing and could be a missing segment from Disney’s Fantasia. From a distance, it looks like water, but close up, it looks like it needs a musical soundtrack.

Even the reflection in the water of Splendid Roseate (featured image at the top of this article) would make a crazy interesting abstract painting. Out of context, the red, pink, and gray shapes create a comical composition. Those who have ever found a stray Roseate feather on the beach know that its seemingly fake pink color also comes off as comical. It looks more like it came from a Mardi Gras headdress than an actual bird. Stevens’ water and its reflections present a silly joy that offsets the seriousness of the realistic depiction of the bird.

Most of Stevens’ reference photos are taken from high enough to capture more of that abstracted water. She refers to the perspective as “a bird’s eye view of birds.” 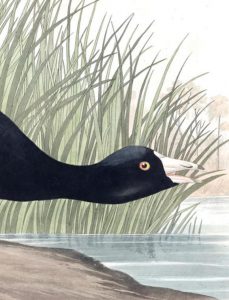 Audubon loved his birds even while he shot them (not with a camera, but with small and discreet bullets) and set them up on armatures to recreate their natural positions. “I feel I am strange to all,” he wrote, “but the birds of America.” On the other hand, Stevens claims to place birds in her paintings for purely artistic motives: “I look for subjects in nature… not for what they are or represent, but for their own particular properties of texture, transparency, reflection, and color.” But Stevens is a true conservationist as is reflected in her artist statement, in which she writes, “It is my sincere desire that, when looking at my work, the viewer experiences the wonderment of the birds in their natural habitat.”

2018 is a good year for Rockport itself, especially compared to last year (curse you, Hurricane Harvey!). The town is getting back on its feet. The Rockport Center for the Arts (RCA) hardly paused after the storm, soon relocating to a smaller property down the street. (The original house gallery was recently razed.) One art gallery was housing RCA’s art classes, and RCA has now rented the nearby large Estelle Stair Gallery, which had its own post-Harvey issues, specifically to host Stevens’ Taking Flight exhibition. It also opened a space next door to the new RCA for an artists’ market to accommodate its traditional monthly artist member exhibitions.

Debbie Stevens lives in Cypress, Texas, outside of Houston, where she says she just saw a flock of Roseate Spoonbills in her front yard. But she’s getting ready to move to Corpus Christi, where she grew up, and she’s sure to see even more birds.

Expect more paintings. As Stevens says, “It’s always the Year of the Bird.”