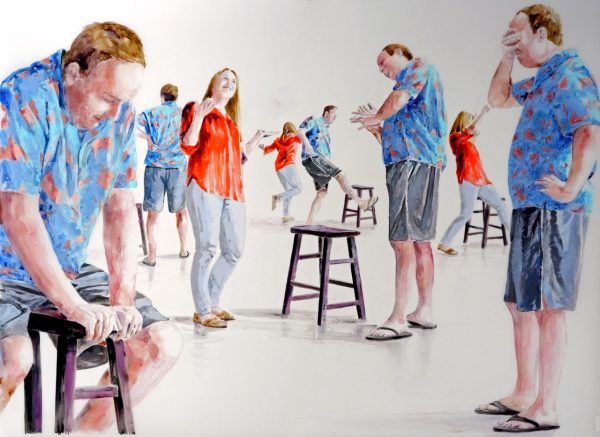 Lillian Warren, I Think He Thinks He Can Just Do It, 2017. Acrylic on Mylar

Later this week, on Thursday, May 31, and Saturday, June 2, Lillian Warren, in conjunction with her exhibition They Woke Up and Started Dreaming currently on view at Anya Tish Gallery in Houston, will host a participatory event inviting you to become part of her art. In her most recent works, Warren has been depicting interactions between strangers, trying to show the “unexpected and unusual beauty” in small, insignificant moments.

To create the works, she gets participants to interact with one another, performing improvisational gestures, sometimes utilizing props. Throughout this, Warren snaps hundreds of photographs to use as source material for her paintings. Ultimately to create the works, she’ll combine some of the most captivating images into vignettes in which her models interact with each other, but also with themselves.

Warren’s participatory event runs from 11AM-12PM on May 31 and June 2. If you’re planning on modeling, make sure to wear something that is bright and flashy. Or, as Warren says: “the more outrageous the pattern the better. I love Hawaiian shirts.”