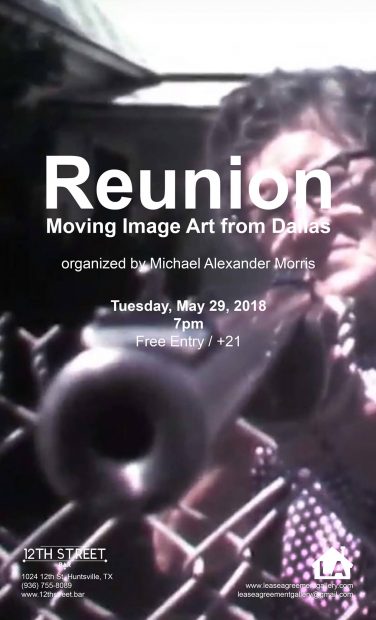 This coming Tuesday, May 29, 2018, if you venture into Huntsville’s 12th Street Bar, you can catch a program of moving image works by more than eight Dallas-area artists. This screening is organized by Lease Agreement, an artist-run alternative art gallery and curatorial project by Huntsville-based artist and professor Adam Farcus. Prior to its activity in Texas, Lease Agreement was active in Baltimore, Maryland from October 2013 to August 2015. Its Texas iteration has been presenting monthly screenings at the 12th Street Bar since January of this year, and has shown films by Jennifer Reeder, Vanessa Barros Andrade, Erin Hayden, Yue Nakayama, and Christopher Smith, among others.