by Paula Newton May 24, 2018
FacebookTwitterEmail 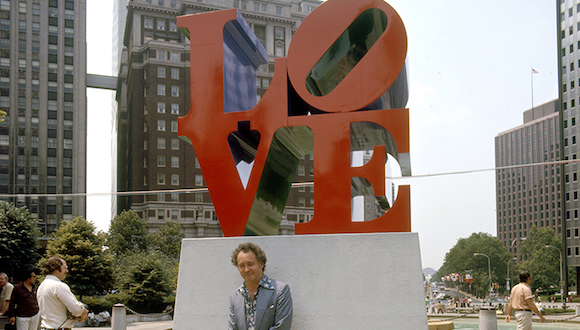 Pop and hard-edge artist Robert Indiana, best known for his “LOVE” paintings and sculptures, died at his home on the coast of Maine this past Saturday, reports Hyperallergic and many other sources. He had become a recluse, but his friends were worried about their inability to contact him.

Born Robert Clark in Indiana in 1928, he spent three years in the US Air Force before attending art school and various artist residencies, finally settling in New York in 1954. Working in an art supply store, he met artist Ellsworth Kelly and ended up moving into a loft area which included such artists as Agnes Martin, Jack Youngerman, and James Rosenquist.

The New York Times writes that “Mr. Indiana blamed the ubiquitous popularity of “LOVE” for destroying his career, recasting him from a standard-bearer of the 1960s avant-garde into an avatar of kitsch.” He never copywrited the image, which became omnipresent. For the US Postal Service LOVE stamp, which sold over 300 million, Indiana was paid a flat fee of $1,000.

The Times adds a story of the precursor to the LOVE painting:

For her 2000 book “Robert Indiana: Figures of Speech,” Susan Elizabeth Ryan, a Louisiana State University art history professor, spent considerable time interviewing the artist and digging into his process. She writes that “LOVE” began in late 1964 as a more explicit four-letter word — beginning with F, and with a second letter, a U, intriguingly tilted to the right. In the wake of a messy breakup with his on-again, off-again romantic partner and fellow artist Ellsworth Kelly, Mr. Indiana had been focusing on word paintings. The two men were in the habit of exchanging postcard-size sketches, with Mr. Kelly laying down fields of color and Mr. Indiana adding large words atop the abstractions.

For a historical 1978 30-minute interview with Indiana, scroll down on the Hyperallergic link.