Artists and the Future of AI: A Conversation with Dean Terry

by Colette Copeland May 20, 2018
FacebookTwitterEmail 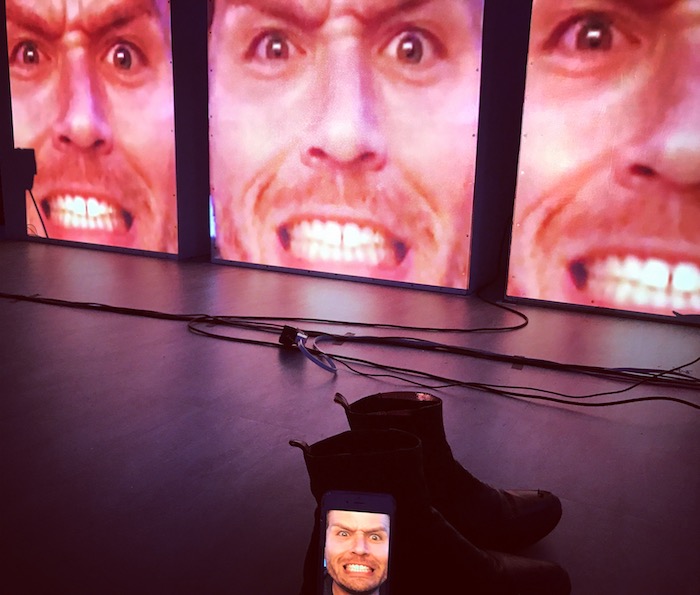 Ed. note: Dean Terry is an artist and media professor at the University of Texas at Dallas, and the creative director of the collaborative art and performance group Therefore.

Colette Copeland: The upcoming Alexa Dialogues in Dallas continues your investigation into how technology shapes communication and relationships. Building upon your 2016 work Acoustic Nerves, the new work centers on human conversations with Alexa, the voice-driven artificial intelligence device. What inspired this work? Or what aspects of A.I. inspired this work?

Dean Terry: I’ve been following AI for many years. It is only recently that I found a way to engage with it creatively that would work in a live context and satisfy my need for rapid iteration. With my longtime creative partner in Austin, Irl Nathan, we worked out a way to create original conversations with Amazon Echo devices. We use the same method as regular “skills” — which are like voice apps — but we stretch it well beyond the intended use.

That technical opening allowed me to start imagining how to develop a performance around real-time interactions with AI — or more accurately in this case, voice agents. These listening devices are in kitchens and bedrooms everywhere and I started thinking about what things might look like a few years out. Our relationship with AI will be a complicated one, but most of our ideas about what AI is is dominated by clichés from TV and movies: the robots will kill us all, or have sex with us just how we like it, or allow us to live forever in indestructible shiny or perfect fleshy robot bodies. So I had to think through scenarios and end states that fell outside conventional portrayals. The general idea, as with most Therefore work, is to unsettle conventional framings of experience, in this case with emerging AI. I wanted to stretch it out and complicate it. 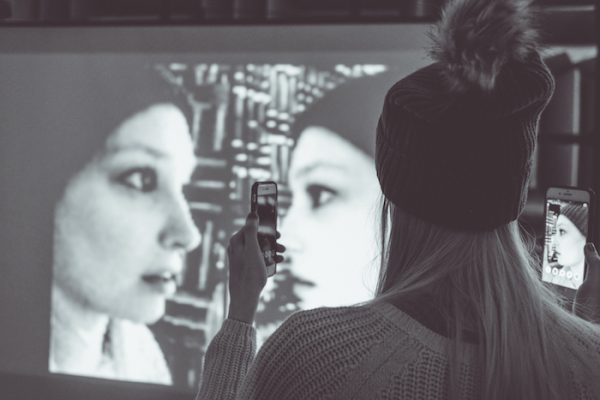 CC: You have been working with the performers of Therefore — Hilly Holsonback, Hannah Weir and Abel Flores — for the past two years. How has the group dynamic evolved over that time?

DT: The current iteration of Therefore was developed around them. It’s like an engine, a machine that we continually stress test and push. I initially borrowed them from Thomas Riccio’s DWZ group because there I saw them performing with abandon, fearlessly. Therefore is a platform for trying out tons of ideas in hybrid forms and a variety of improvisational framings. We share multiple sensibilities, particularly humor and an understanding that the serious and the absurd are inseparable twins. There’s a high toleration for experimentation, if not a bit of occasional madness. Collaboration is about trust and, most of the time, we have what I think is a model collaborative environment.

I do think that we will see each of the members branching out even more and pursuing various individual projects. Hannah is always performing somewhere and seems to be in countless bands. Abel has Artstillery and solo acts he is developing. And Hilly is a visual artist as well as a performer, and probably will be everyone’s boss at some point. I’m also happy to have longtime collaborator and expert modular synthesist Patrick Murphy working with us this time. 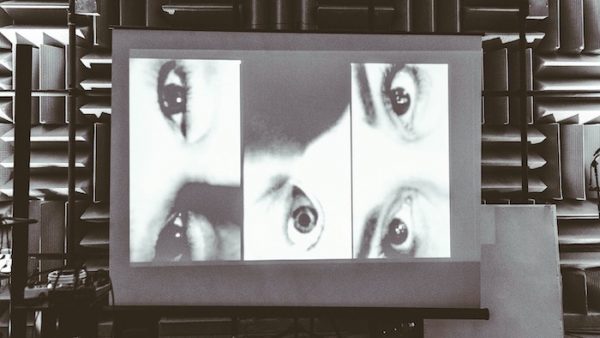 CC: Dada informs your practice, not only conceptually — celebrating absurdity and irrationality, but also with the experimental use of media — experimenting with sound, performance and video (or, film in Dada/Surrealist works). The Dadaists were responding to WWI. How does your work respond to the current political climate?

DT: Sometimes we respond to it directly, as in The World’s Safest Art Show, where we protested all the shutdowns of arts events by the Dallas Fire Marshal. Our own show, along with many others, was shut down mid-performance with no warning, despite the fact that it was kindly funded by another part of the same city. Then last December we played a mostly improv set at my artist friend and colleague John Pomara’s infamous annual art party. It was basically a Dadaist-flavored absurdist comedy set with impersonations of Melania Trump and direct critiques of the role of some visual art in the context of the current political climate.

In The Alexa Dialogues, there are many nods to Dada, including an entire back-and-forth dialogue with Alexa composed of nonsense words and noises, which traces back to the earliest Dada performances. There’s a (pretend) machine-learning, generated weatherman that delivers highly mannered emotional forecasts from, we discover, the past. The entire show is structured in 29 mini-performances, all with varying perspectives on the overall theme, but with no structured or linear narrative. We tend to frustrate categorization because different elements — images, sound/music, performance — dominate at different times and combine in varying ways. Often, we search for unexpected interdependencies between media elements. For me, it just has to be live. So much of our experience is framed and our artistic constructions are formed based on presets. Liveness has to mean something.

Dada had enemies, including itself. Our enemies are decoration, common sense, and self-serving, simplistic rational constructions of reality, which is the basis of political propaganda. Poking at the underbelly of that and refusing to rely heavily on conventional genre structures is a deeper critique than simple counter-argument, in my view. Questioning constructions of reality is a prerequisite for meaningfully transforming experience through creativity.

DT: Power will win. Whoever or whatever controls the most powerful systems will win. I’m not in the habit of paraphrasing Putin, but he’s right that whoever controls AI will likely control the world. The problem is this may not be a “who.” This is why you see recent efforts to control or influence the trajectory of AI in various ways: ethics, regulation, making AI human-like, etc.

Our ideas and imaginings of AI are clouded by the people and industries who develop the technology, by their assumptions — often unquestioned — about reality. If you assume the world is something like a computer, and that the brain is something similar, then it is easy to imagine by extension a network emulating that. This is why it is important that creative people — artists of all kinds — engage critically and imaginatively with emerging technology. We can bring different assumptions, methods, and, with some artists, a healthy tolerance for uncertainty. And there will certainly be a lot of that in the coming decades. Some of smartest minds on the planet are arguing both sides of the AI debate: will we live forever in the cloud or just until the robots kill us all, possibly by accident or by executing a bit of code? But as with all things with sides, I think what happens with AI will be more complicated and unpredictable than that. Just look at the evolution of the Internet. I think we need to hear the voices (the work) of artists here, reimagining and reframing futures.

My guess is that, in this century – or the latter first half of it anyway – some kind of human/AI hybrid will dominate, meaning AI tech will augment, amplify, and shape our thinking. This will affect creative practice deeply, and there will be a range of responses that we are seeing already. In the coming decades the relationship between individual creative practice and computing/thinking systems will become more intertwined. At some point AI itself will be something like what we consider to be creative, making its own work in and for its own context. Some of it may overlap with human concerns and some may not. I’m not talking about AI emulating human painting, literature, or music, which is obvious and uninteresting, but constructing things for itself, entirely independent of art history, theory, and economics. Creativity and what we think of as art is not exclusive to humans. 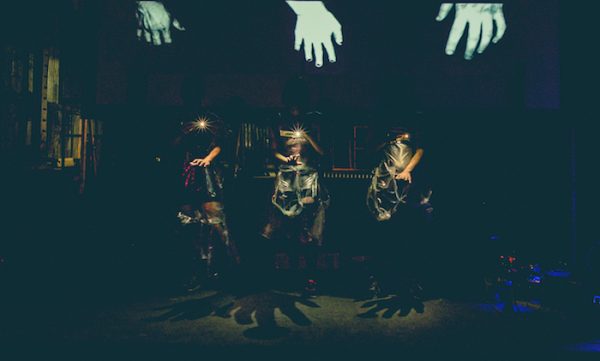 CC: Tell a funny/strange story about something that happened during one of the improv sketch/practice sessions.

DT: There are so many. One of the things I try to do is create a framework in which the group can improvise, experiment, and generally attempt to surprise and/or get a rise out of each other. It’s a tough room. Despite the seriousness and dark tone of some of the finished work, the improv sessions are raucous, particularly at the beginning of a project.

The frame for The Alexa Dialogues is a critical, experimental view of emerging AI. Within that are many varying, sometimes contradictory perspectives and within them spaces for improvisation. Several months ago Abel took full advantage of the context. While sitting in front of our projection screen he noticed it created a silhouette, the kind that you see on crime shows when someone is confessing anonymously. We happened to have several voice transformers connected to microphones and Abel began an improvisation about confessing his love for Alexa in a low-pitched voice. And he was such a jerk. Full on mansplainer. And it killed us. Men need to be calling out other men in this era, so we put it in the show, along with several others that deal with gender and technology. The conceptual framing, plus a ready technical framework, plus Abel’s phenomenal sensitivity and improvisational ability all came together. In our early sessions in particular, this happens all the time, and by design. Therefore, properly configured, it is a surprise engine.