by Anna Nelson Daniel May 9, 2018
FacebookTwitterEmail 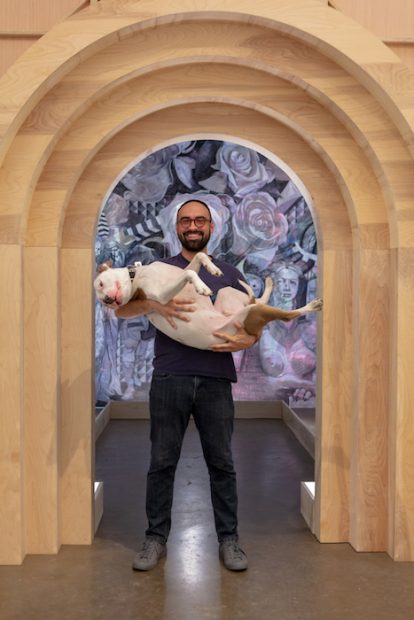 Dallas-based artist Francisco Moreno debuted his latest project Chapel at Erin Cluley Gallery in Dallas a few weeks ago. Inspired by an encounter with the mural paintings of The Hermitage of the Vera Cruz de Maeruelo in Museo del Prado in Madrid, Spain, Moreno has constructed a large-scale painting in the likeness of this chapel. This modular structure is situated in the center of the gallery space. 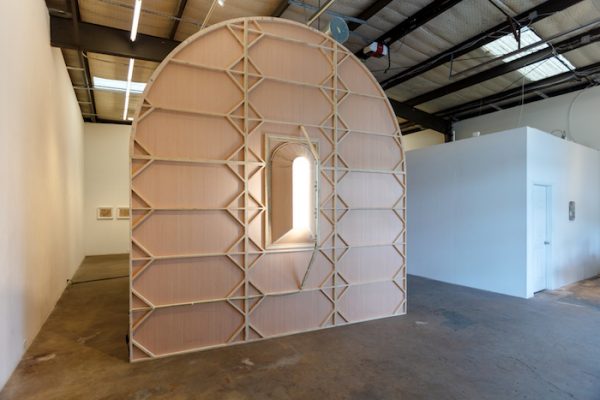 Upon entering the main room, viewers are introduced to a single panel painting and the exterior form of Moreno’s chapel. Circumambulating the structure to the chapel’s entrance, the viewer first glimpses a world inside it, composed of assembled, roiling imagery ranging from figures to flowers, car machinery to horses, eagles to spinal columns. Detailed brushstrokes coat the entire curved interior surface walls in grayscale tones. Opposite the chapel entrance, back out in the gallery, are five preliminary drawings exploring references that later resurface in the interior marks of his chapel mural.

We met to discuss the project and the results of this work, years in the making.

Anna Nelson-Daniel: There is a striking duality between the exterior and interior aesthetic of the chapel. Was this project created to provoke thought on the relationship between painting and architecture?

Francisco Moreno: The architecture [the exposed panel] of the chapel is really just the back of the painting. I was inspired by [the Prado Chapel] because it was a relocated chapel in the bottom floor of the Prado. I remember going in and seeing the crevices where they had to transfer the frescos and transport it to the Prado to reinstall it there. I think knowing that they did that sparked the idea that my chapel needed to break down, too. Things just kind of clicked. If you look at the exterior of [my] chapel, all of the wood is shooting up in one direction. I ripped all of the plywood as a subtle homage to Donald Judd, making sure you could see all of the plywood. For the most part, everything on the exterior exists for its structural aspects. 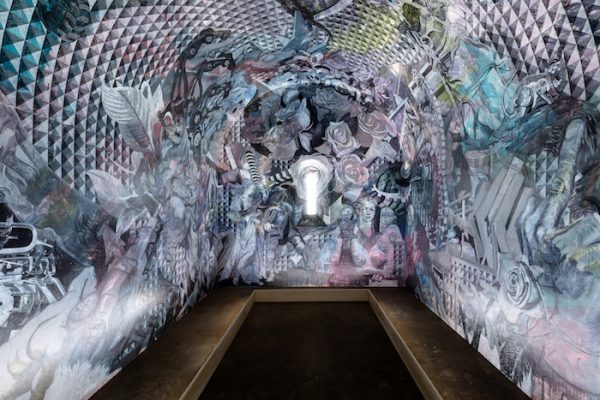 AND: Much of your work challenges this notion of painting as it transcends the framed canvas.

FM: [Visting] the chapel [in the Prado] was an experience I wanted to recreate. If I was going to do it, I had to go all the way: having the barrel vault, the window, the portal. The experience wasn’t just seeing the murals. The experience is walking in through the portal and having that back window lit subtly, not enough to actually do anything but just enough so you know that it’s lit. All of those things are incredibly crucial in creating the buildup.

AND: The title of the project creates a context for the work and in a sense how to experience it.

FM: I think art is a belief system in and of itself — not to say that it is a religion but it is spiritual. I was trying to figure out… what do I call it? In remembering works [where] there’s no fluff around the title… no metaphor, no allegory — the title of the exhibition is directly what the piece is or what the concept of the show was. I read about Ellsworth Kelly’s Austin project, which is a chapel, or chapel-like, that they titled Austin.

AND: What was the significance of placing the back of the chapel facing forward [toward the gallery entrance]?

FM: I wanted the viewer to understand the space before they walked in, so I had it shifted backwards so you have to walk around it to go inside. Even though you don’t think about it, you’re aware of how big the thing is. It’s mentally preparing you — even if it’s for a millisecond — you’re about to experience something. Then the light at the end kind of draws you in. 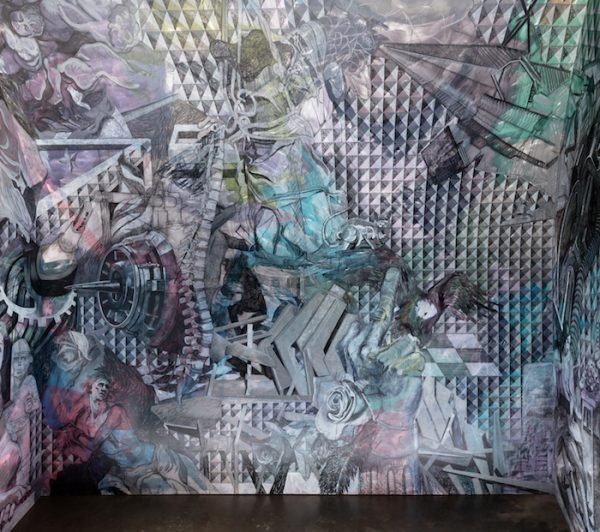 AND: The painting is also detailed in an ornamental way that draws you in to discover varied references.

FM: I like the idea of the baroque — this quiet overwhelming sensation. It’s not overwhelming through bright colors and thick paints; it’s tiny brush marks using barely any paint. It’s overwhelming but subtly overwhelming.

In terms of the art historical references, most of my inspiration comes from Rubens drawings. I would look at these drawings by old masters and sometimes love the drawings more [than the paintings]. They’re breaking down form, figuring out the logistics of how to make an image. It’s about the narrative, but it’s more about the structure of the painting or the structure of an image. 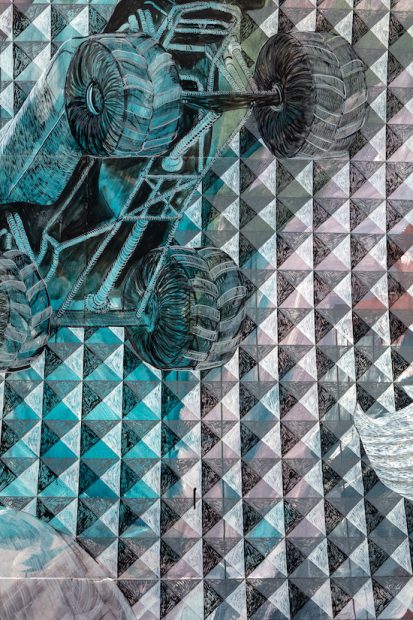 AND: What would you say the main takeaway has been [in the process of making your chapel]?

FM: I’m so grateful — the show has had a lot of traffic. It can’t really be photographed; there’s nothing like standing inside of it. Those are the experiences that I love when I experience contemporary art. So that I was able to create this experience.

I’m definitely happy with it. I think with any artist who finishes a project we see a lot of the faults — we see we could have done this better, we could have done that better — but I’m incredibly happy with it. A big surprise was when I broke it down into pieces to transport it from the studio to the gallery; I got to see the panels as paintings. 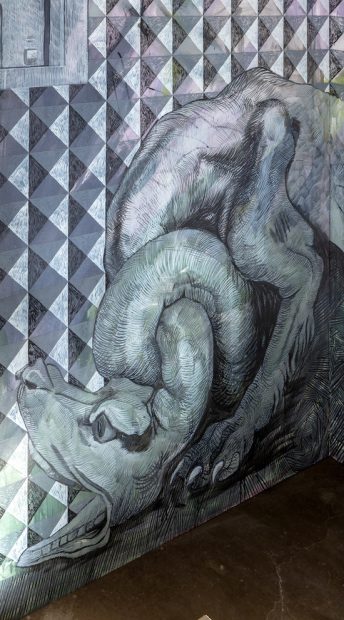 AND: What’s next for the Chapel?

FM: I’m in the studio now, and for the past few days have been focused on solely making paintings based off of compositions and ideas that happened in the marathon of Chapel. I think it would be awesome for it to travel, and hope in the next phase the chapel will hit the road.

“The Chapel and Accompanying Works” is on view at Erin Cluley Gallery, Dallas, through May 19, 2018.