by Betsy Huete May 7, 2018
FacebookTwitterEmail 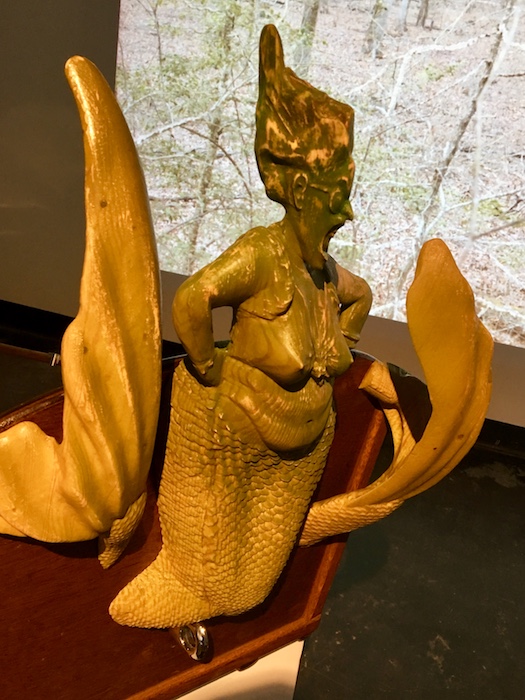 In their cumulative, end-of-year exhibitions, Core Fellows at the Museum of Fine Arts Houston are often accused of showing work that is inscrutable and self-indulgently heady — an accusation that is sometimes fair, other times not. But much of the work in this year’s exhibition, on view at Lawndale Art Center in Houston, while generally accessible, tends to fall into the kind of trap that often ensnares the usually cerebral, nearly always ambitious type of artist that typifies a Core Fellow. This trap is the post-postmodernist formula for art-making, and it goes something like this:

Now, there are times where this formula makes complete sense. After all, the post-postmodernist formula is a vehicle for an artist to flesh out and humanize a concept beyond simply pointing at an idea and expecting the viewer to bask in how smart she is for getting it. It’s also a strategy to enact the craftsmanship of one’s concept. But it can also be a crutch, by either A.) overcompensating for a concept that lacks dimension or, B.) betraying a sense of confidence the artist has in his work by piling too much crap into the the final presentation, instead of letting it be what it authentically is.

Rather than peruse the entirety of the exhibition, I’d prefer to focus on two works that most fully provide a point and counterpoint to my argument: Shana Hoehn’s Boggy Creek Version 2 (2018) and Yue Nakayama’s How Can I Miss You When You Won’t Go Away (2018).

Hoehn’s Boggy Creek comprises a video and two sculptures: a canoe with a carved wooden figure of a siren/mermaid, and what looks like a broken cast of an animal’s leg — presumably evidence of Bigfoot. We learn that the canoe is the vessel for the artist’s quest for Bigfoot as she explores gas stations and swamps and roadside museums. While painted roadsigns of Bigfoot are amusing, and the draping moss seductive, the film itself does little to buttress what I think Hoehn is fundamentally getting at, which is delve into, conjure up, and interrogate the male-centered mythologies that revolve around the search for Bigfoot and the siren. She would have been better off relying on the props (canoe and leg) that she reconstituted as sculptures in the Grace R. Canvar Gallery. The drained whiteness of “Bigfoot’s” furry leg, the carved siren that hilariously looks like a cross between a screaming library lady and Egon from Ghostbusters, and the solitary Abstract Expressionist drip of bird shit encrusted on the side of the canoe already accomplish what the film doesn’t, and they do it with more humor and mystery. 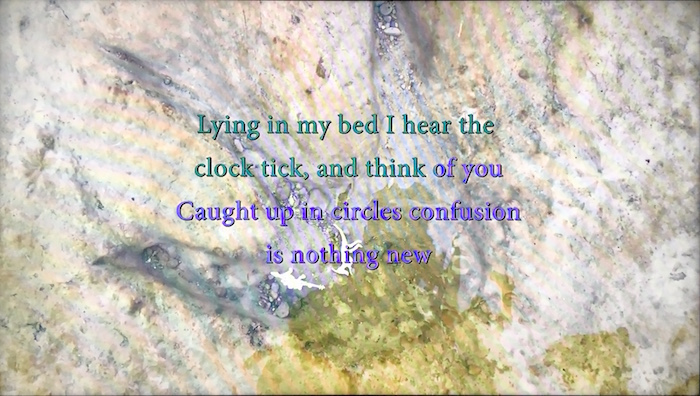 Yue Nakayama, How Can I Miss You When You Won’t Go Away (film still), 2018, karaoke installation, dimensions variable, video, TRT 10’56”

I’ve taken issue with Yue Nakayama’s work in the past because she’s relied too heavily on absurdity — so much so that it overtakes and dominates the conversations I think she’s really wanting to have regarding mortality, relationships, and the mortality of relationships.

But instead of being a discordant pastiche of weirdness, Nakayama’s work here, replete with a video, karaoke mics, a vinyl floor and wall signs of crash-test dummies and waterfalls, focuses mainly on the video of a park of mechanized dinosaurs, and its silliness makes total sense here. These pathetic creatures — emblematic of aggressive mating, predatory impulses, and of course extinction — provide a smart backdrop to the folly of romance, and the insistent human instinct to engage with it again and again. And the karaoke stands, which could so easily read as gimmicky, work well. That’s because the mics, which are continuously turned on in case the viewer wants to belt out hits like Time After Time, simultaneously read as warm and welcoming, but also intrusive and intimidating. And while there is an enormous pile of absurdity going on in this work, titled How Can I Miss You When You Won’t Go Away, the absurdity here is sharper, more pointed, more mature, and therefore that much more authentically jarring in juxtaposition with the very real fears and vulnerabilities that come along with loving someone else.