The Hold Steady: A Recap of the 2018 Dallas Art Fair 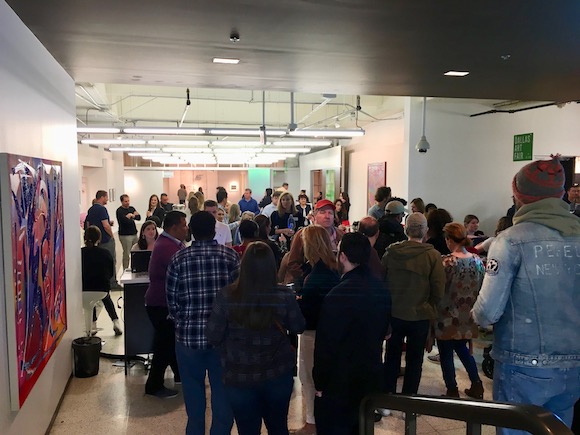 Over the last few days I thought my coverage of the Dallas Art Fair would include an extended op-ed about how sorry I feel for art dealers at art fairs. And I do feel for them, when the fair crowd thins out and the dealers are standing and sitting in their exhibitor booths for hours — for days — having brought with them the work they hope will appeal to a certain market. Gallerists generally don’t bother showing artists they don’t believe in. It’s not worth it. The sales pitch is much smoother if you genuinely like what you’re selling. And dealers have very specific sensibilities. So there’s this awful sense at some art fairs of the lonely dealer standing sentinel over artworks they personally like very much, but they can’t get people to engage with. It’s so depressing to me that it seems like one of the most obviously depressing things about fairs. Art dealers are, at heart, genuine art enthusiasts — they just happen to also sport the sales gene. So to me, an art fair is almost like seeing some of the world’s smartest, most risk-taking curators having to, as exhibitors, kowtow endlessly to lazy crowds made up of people who can’t be bothered to actually go into a gallery or strike up a meaningful relationship with a dealer. But then, we can bellyache about art fairs all day.

But I went back to the Dallas Art Fair for the third time today (I’m writing this on Sunday), and it was packed. Deals were still happening. I talked to some dealers, too — some Texans and some out-of-towners — about how they felt about the fair this year and whether they’d be back. I’m happy to report that for the most part, the 2018 fair has been a good one for sales, for galleries, and for morale. The crowds are both bigger and better. I had a number of dealers say that the people coming through the fair, at this point, 10 years in, have truly gotten the gist of what an art fair is and why it happens. And there did seem to be a lot less of the kind of trashy, blingy, Rolex-and-cologne and boob-job and stilettos crowd that follows any party that Dallas can pump out. The people are there to, for the most part, look at the art. (And evidently to buy it). 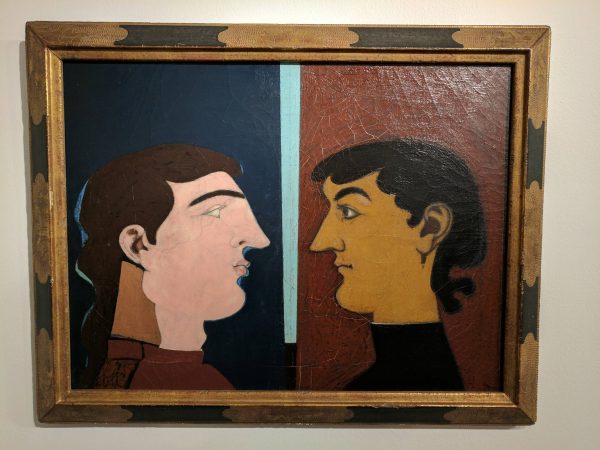 I have my personal narrative of the development of the fair. Historically, I’ve called it the “Chris Byrne Show,” or the “John & Chris Show,” named after the fair’s founders. Ten years ago, John Sughrue, a Dallas-based developer and art collector, had an odd-layout building in the center of downtown Dallas, next to the Dallas Museum of Art, that needed to find its purpose and some profit. Chris Byrne was an independent art dealer and consultant with a big Rolodex. They paired up. The first year of the fair in the FIG building (or F.I.G., which stands for Fashion Industry Gallery) was a predictable mishmash of local and non-local dealers, but the caliber was pretty low: there was a lot of southwestern-y art and decorative stuff. But it evolved, notably, and I’d say it really hit its stride about three years ago (which makes sense given the awful resonance of the ’08 crash). By then it was a small and intimate but truly international fair. It had dealers in from Tokyo and Antwerp and Mexico City. The work was good. The DMA started its Acquisition Fund around that time, too, and in response exhibitors brought even better, more serious work. Gagosian showed up last year, though, also notably, it didn’t put its own name on its booth. It’s like it was both there and not there. 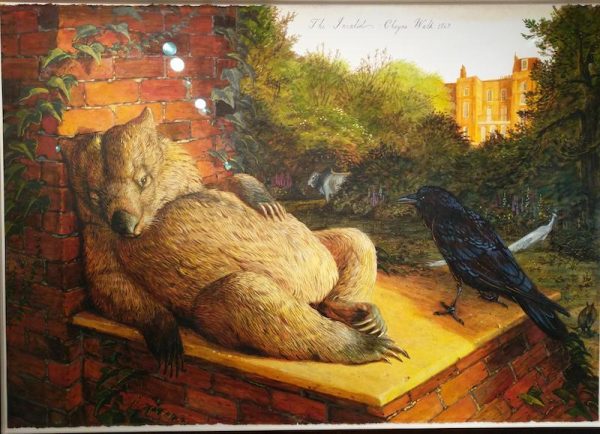 Chris Byrne sold his stake in the fair last year, and his job was given over to two directors: Kelly Cornell and Brandon Kennedy. (It really did need two people to fill his shoes.*) This year the exhibitor list included Simon Lee, and Casey Kaplan, and Luhring Augustine, and James Cohan. These are some rock stars in the gallery world, if you pay attention to these kinds of things. Marlborough keeps coming back. Los Angeles’ (cooler-than-Jesus) Night Gallery returned. Canada keeps coming back. Karma Gallery came back. But I talked to some local dealers, too, who told me (and I believe them) that they did so well at the fair this year that they’re beside themselves. I also talked to some Texas dealers who didn’t sell as much as they would have liked or predicted, but that they want to keep doing the fair because it’s so good for exposure, and they like the energy. Four Houston galleries (in the absence of any good Houston fair) showed up. Interestingly, Dallas’ Barry Whistler voluntarily sat out the fair this year. (In relative terms, in Dallas, this is like Luhring Augustine not doing the Armory anymore starting around 2009, which always seemed kind of badass to me.) Ro2, a beloved Dallas gallery that shows a ton of Dallas artists, did not get invited back, but then this year the upstart Liliana Bloch finally had a booth at the fair (her gallery was ushered in by Kennedy) and sold work directly to the DMA. 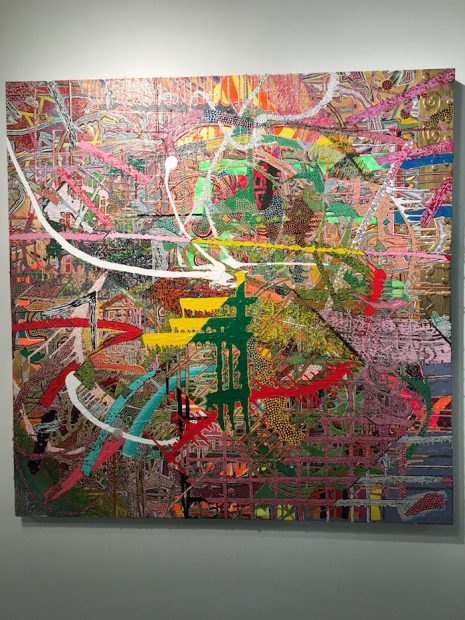 In a bit of news that I count as good but some exhibitors will not like: the fair is staying at FIG for the time being. Sughrue extended the lease, after there was heavy talk last year of 1) the fair outgrowing the FIG building and 2) Sughrue building out a bigger space in the Design District. For better or worse, the move is on indefinite hold, with Sughrue admitting that the fair will keep growing and can’t stay put forever, but that the FIG building’s location is impossible to beat. For exhibitors with booths, I think there are areas of the building that are great, and there are areas of the building that are deadly. There’s too much ductwork and the ceilings are low. But the intimacy of the building is charming, and sets this fair apart from all the tented art fairs and convention-center art fairs, regional or international. It feels bespoke because it actually is. 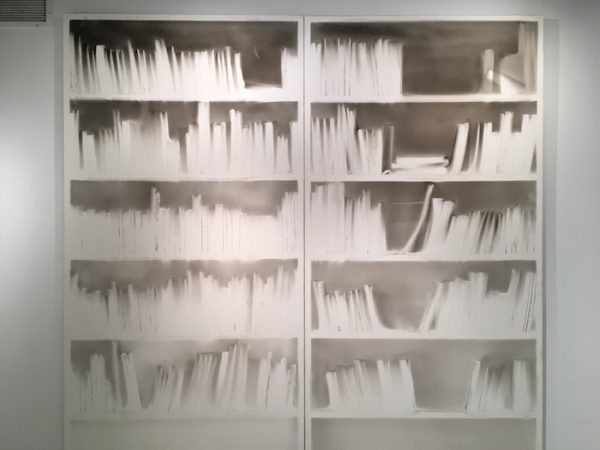 Here’s what I think. I think the fair is, this year, powered along by its own momentum. I think it’ll take a couple of years to feel the impact of new directors and a fair without Byrne. I think the North Texas economy and the Texas collector base is (always) enticing to out-of-town galleries. I think a lot of us in Dallas have started to take this art-heavy week for granted, forgetting that ten years ago, 90% of the tertiary art-related things that happened in Dallas this week would not have happened without the fair as a hub. Conversely, the fair couldn’t exist or be getting better without the evolving seriousness of the DFW art scene, including its museums, collectors, curators, universities, galleries, press, et al. In fact, the other events, like the Nasher Prize, aren’t at all tertiary. They’re fellow drivers. These art events are large and small, and serious. The fair has been a catalyst for Dallas-driven art events (despite the ongoing fire marshal problem); my friends and I have been burning ourselves out trying to make it to everything, to see everything. Right now things are not just holding steady; they’re getting better. It’s a groove. Fingers crossed that it continues.

*Ed note: Technically, Chris Byrne’s direct replacement, as Director of Exhibitor Relations, is Brandon Kennedy. Kelly Cornell returns for the second year as Director, and for the seventh year working for the fair.

Insightful and comprehensive. Thank you Christina.