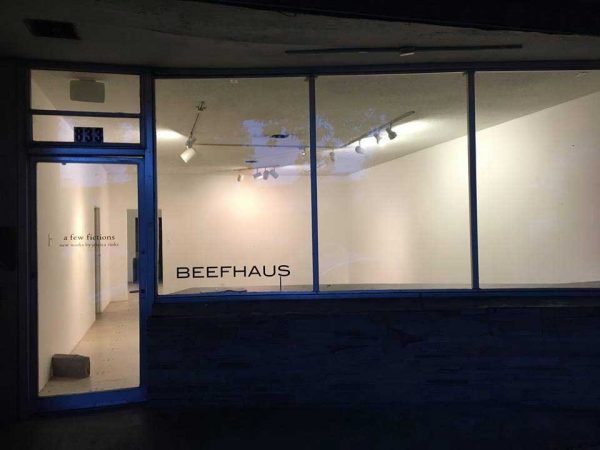 Art Beef, the Dallas-based artist collective that for years has been operating Beefaus, an art space in Expo Park, has told Glasstire that the space will close its doors this coming May. The collective was founded in 2012 by artists Adam Rico, Nic Mathis, Luke Harnden, Crisman Liverman, William Binnie, and Zachary Broadhurst, and went on to have members come and go over the past few years. In 2013, Art Beef opened Beefhaus at its current location (833 Exposition Ave) and began hosting exhibitions organized by collective members and guest curators. While things haven’t always been smooth sailing for the space (it was a victim of the Dallas fire marshal crackdown a year and a half ago), over its life it has hosted many exceptional shows by local and national artists, including exhibitions by Ryder Richards, Emily Peacock, Shelby David Meier, Michael Mazurek, Cassandra Emswiler Burd and Lucia Simek, among others.

The closing of Beefhaus does not mean the collective itself will dissolve. According to Alison Starr, one of Art Beef’s current members, the collective will continue on and is only closing its physical space for the time being. In the meantime, it will operate in a digital space and live through the collective and individual work of its five current members (Starr, Tim Best, H Schenck, Adam Rico, and Randy Guthmiller) and its former members. Although there is talk that the soon-to-be-vacant Beefhaus gallery might be resurrected as an art space by other Dallas artists or curators, nothing is confirmed as of this writing.

On Saturday, April 14th, at 7PM, the weekend of the Dallas Art Fair, there will be a memorial event at Beefhaus, celebrating what the space has provided for Dallas and what it has meant to Art Beef. As one may expect, attendees to the event are asked to wear “proper memorial attire.” It seems like to the very end of its life, Beefhaus will fulfill Art Beef’s mission:

“ART BEEF is a collective of artists based in Dallas, Texas interested in challenging notions of authorship and market structure, while questioning the forms of programming most often associated with other artist-run spaces, galleries, organizations, and institutions. While individual artists ourselves, Art Beef is not intended to serve a platform for our own respective practices. This collaborative project is, therefore, a problematizing exploration of artists as curator without the constraints of either a commercial or not-for-profit art space, examining the status and function of art, particularly within the city of Dallas.”

Update: Glasstire has received a statement from current and former Art Beef members about the life of Beefhaus:

“Beefhaus, an incubator and an outpost for challenging art in North Texas since 2013, will soon be closing its doors. Though it was never about permanence, the punctuating of this chapter is accompanied by a great deal of emotion. Beefhaus was a fluid organism that took many forms during the course of it’s existence. Without the help of all who participated it would undoubtedly not lasted as long as it did. Beefhaus would like to thank all of the artists, organizers, and participants who over the years made Beefhaus what it was. Without everyones collective effort it would never have been possible, We salute you. and stay tuned…