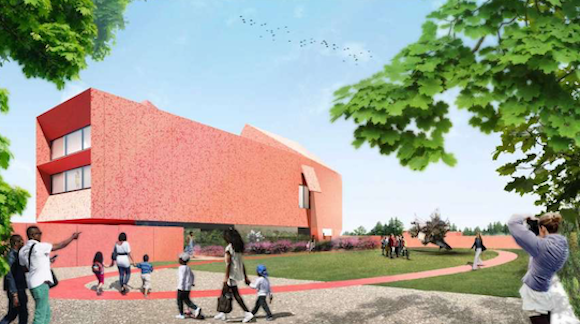 It has long been known that developers follow artists, capitalizing on the cool, cultural neighborhoods. The Nasher Sculpture Center fought for years against the shiny Museum Tower building, which reflected super strong sunlight across the museum.

Now, Linda Pace’s new “Ruby City” is being threatened by the opposite effect. A developer is seeking to rezone the property across the street to accommodate more than 1,125 residential units, blocking the sun that Ruby City is being built to reflect, reports the San Antonio Express-News. The new space, inspired by a dream of the late collector and artist Pace, will use concrete dyed red and infused with mica and glass so it sparkles in the light.

On Tuesday, residents gathered at a meeting of the City’s Zoning Commission to oppose a rezoning that would allow a multi-family development as high as 10 stories. A second hearing is scheduled for April 17.

Councilman Roberto Treviño, whose district encompasses the neighborhood and is himself an architect, stated, “Of course, we want more housing, but we want housing that’s suitable and compatible.”