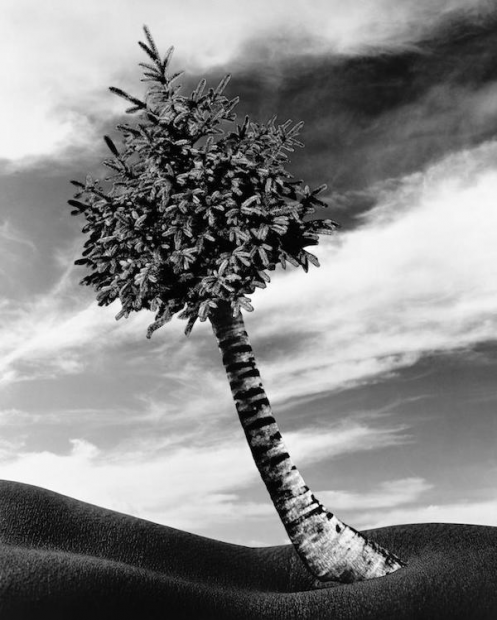 In the #metoo era, art by women creators takes on an increased heat and gravitas. An all-women exhibition at any time can be, on some level, a response to patriarchy, misogyny, and the systems of control, but now all-women shows feel like part of a reckoning. We are still in the early phase of it, where individual hideous men are being culled and presumably exiled to their quarters at Mar-A-Lago, but many offenders remain tumescent, free, braying (like the president). But there’s something in the air and it’s not going anywhere soon. I believe if Trump goes down, it will be because of his relentless history as a grotesque abuser, and not because Jared Kushner reenacted the desperate final scenes of Jack Lemmon in Glengarry Glen Ross to a bored Russian oligarch, who in turn is half-watching a Jean-Claude Van Damme movie.

For the show Reclaimed, the Linda Pace Foundation in San Antonio has selected 25 monochromatic works from its collection by female artists, including Laura Aguilar, Dorothy Cross, Judy Dater, Annette Messager, Lorraine O’Grady, Robyn O’Neil, Linda Pace, Tracey Rose, Lara Schnitger and Kiki Smith. The aesthetic restriction of monochromatic works is significant: These are black-and-white times, and starkness feels appropriate. Many of the pieces are dramatic and symbolic, and reference religion, race, and colonialism, in addition to gender. 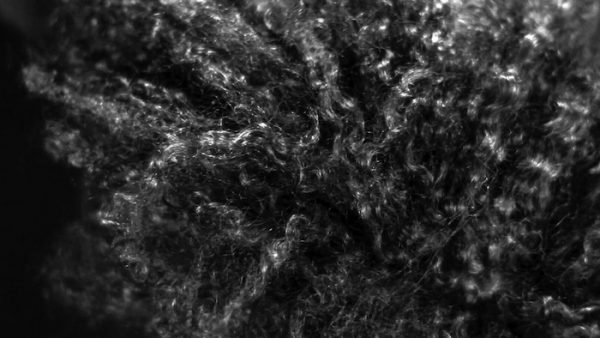 The show’s centerpieces are two works by Lorraine O’Grady. In The Fir-Palm (pictured at top), a wintery fir tops a Caribbean palm trunk that connects to a woman’s back. The image is beautiful and deeply sad — a visual articulation of colonialism and its roots that goes straight through the spine. In the video work Landscape, O’Grady (who is of Jamaican descent) films her own hair in extreme close up, drifting in the wind like sea grass or tree leaves. There’s a haunting desolation in this work, the loneliness of existing in the ironclad fantasias in which we’ve imprisoned ourselves. O’Grady writes plaintively: “My attitude about hybridity is that it is essential to understand what is happening here. People’s reluctance to acknowledge it is a part of the problem… . The argument for embracing the other is more realistic than what is usually argued for, which is an idealistic and almost romantic maintenance of difference… . I’m really advocating for the kind of miscegeneated thinking that’s needed to deal with what we’ve already created here.” 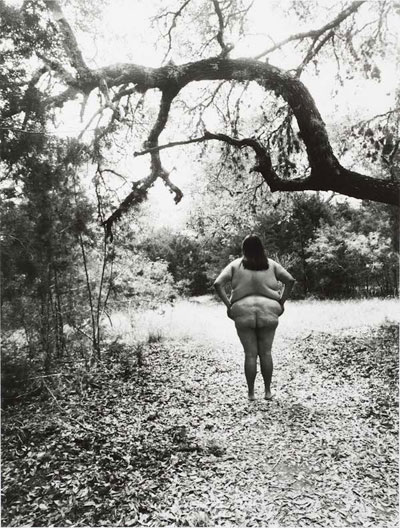 Laura Aguilar’s stark nude self-portraits in wooded nature are not only an affirmational depiction of an “imperfect” body, but they possess a supernatural exaltation. Many of the pieces are spiritual — a reflection of the meditative foundation space which includes a memorial to Linda Pace’s son. 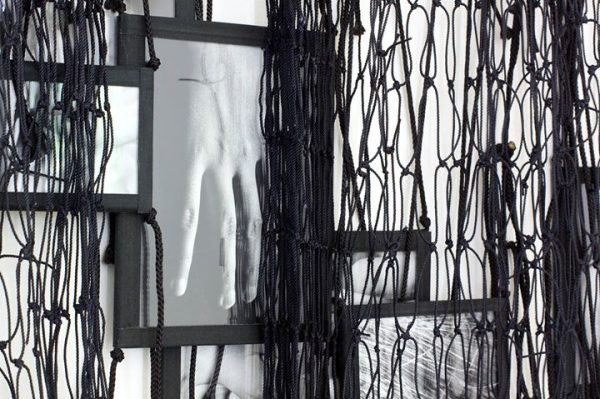 In Annette Messager’s Mes voeux sous filet, black netting and photographs of various body parts form a kind of religious shrine that’s beguiling and unsettling. Made in 2000, Messager’s piece is aligned with the aesthetics and moral inquiry of the French Extremism of genre film (which includes, among others, Claire Denis’ Trouble Every Day). Like those movies, Messager’s piece is almost cosmic horror, but strangely soothing in the way of, well… religion. These are not mutually exclusive moods. 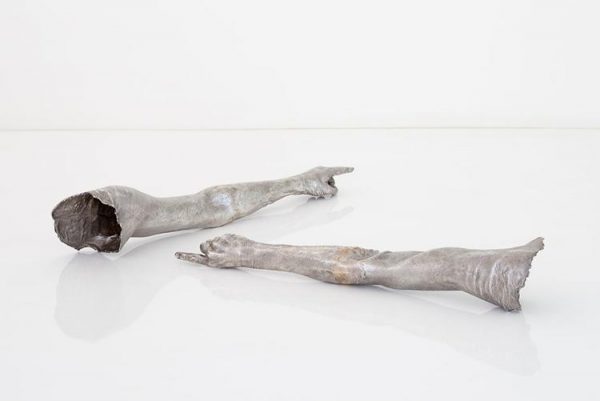 The Irish artist Dorothy Cross’ gorgeous bronze and silver sculptures Arms depict two untethered arms pointing in opposite directions. The piece references ‘The Troubles,’ the decades-long conflict over Northern Ireland’s autonomy, but also points (literally), to a more ethereal reflection. In an interview, Cross states: “There are two ways I function in the world, one is in terms of materiality and the body, and the other is some kind of unseen spiritual route. The end of our finger is the limit of our bodies.”

The works throughout Reclaimed are often devastating, but also resolutely hopeful. There is another world to be had. Or if there’s not, it’s still worth dreaming of one.

Through June 26 at Linda Pace Foundation/Space in San Antonio.